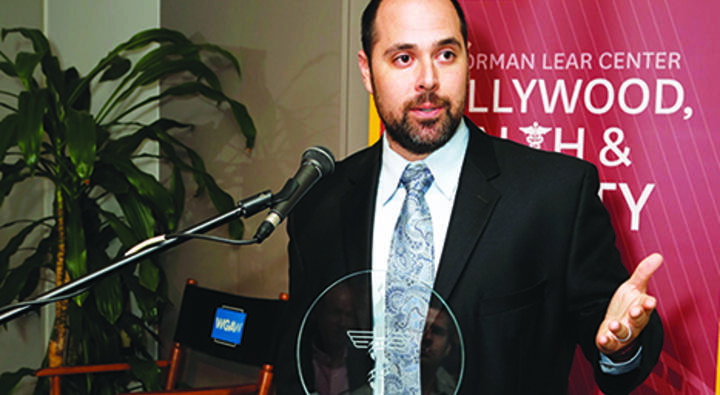 The awards are presented on behalf of the Centers for Disease Control and Prevention (CDC) by HH&S, a program of the Norman Lear Center at the University of Southern California’s Annenberg School for Communication and Journalism.

In his opening remarks at the beginning of the Sept. 19 awards ceremony—held at the Writers Guild of America, West—Martin Kaplan, the director of the Lear Center, praised not only the writers but the work done by HH&S. “You will see tonight people who have benefited from it, and it’s our pleasure to honor them this evening.”

In announcing the new category of climate change for the awards, Kaplan said that HH&S is “adding depth and power” to an area that has a great impact on people’s lives and health.

“They create our collective future,” she said. “Their stories transport millions of viewers around the world, and determine what happens in our culture. The writers we’re celebrating have helped viewers take a leap on the path to health. If we ask ourselves what is working well in Hollywood, we will find the answer here tonight.”

'SVU' Wins in Primetime Category
NBC’s long-running Law & Order: SVU won first-place in the primetime drama category for major storyline, for an episode titled “Personal Fouls” about a coach who sexually abused the young players on his team over the years. The storyline foreshadowed the scandal that would erupt at Penn State less than two months after it aired.

Dragin said that the winning episode was an example of “taking a situation that’s hard to talk about and hard to look at, and telling a great, sensitive story.”

“There’s so much good TV out there,” Dragin added, citing his fellow nominees in the drama category. That sentiment was seconded by Buffington, who singled out the Sentinel judges who reviewed 50 entries this year, nearly double the number over past years. This year’s 10 finalists who received the highest scores came from 14 different networks and cable channels.

“I don’t know how the judges were able to do it,” she said. “These are such powerful topics and incredible portrayals.”

FOX’s Touch took first place in the global health category for an episode titled “Safety in Numbers,” which included a storyline about violence against women. Executive producer Carol Barbee briefly recounted a story she had heard during a trip to South Africa last year that was organized by Hollywood, Health & Society, which partly served as her inspiration for writing the storyline. The tale was one of recurring domestic abuse at the hands of a husband in a local settlement, and how the neighborhood women banded together to confront the abuser, encircling him while they banged on pots in a successful effort to call attention to his behavior.

In the primetime drama category for minor storyline, USA’s Necessary Roughness won for “Dream On,” about a celebrity skateboarder with undiagnosed bipolar disorder. The award was accepted by executive producers and co-creators Liz Kruger and Craig Shapiro, and supervising producer Mark Kruger, who wrote the episode.

“We always try to create characters where over the course of the episode their true illness is revealed, like a mystery that unfolds,” Mark Kruger told the audience. “Bipolar is so difficult to diagnose so many times because it does have a spectrum of symptoms,” involving periods of depression, mania and sometimes a combination of the two.

Serious 'Sesame Street' Topic
Even the winning entry in children’s programming from PBS’ long-running family favorite, Sesame Street, was serious in nature, tackling the topic of hunger in America. Christine Ferraro, the writer of “Growing Hope Against Hunger,” and Cynthia Wade, a filmmaker who made a series of short documentary stories included in the show, were unable to attend the ceremony. Buffington accepted the award for them.

Still, there were some lighter moments in the evening’s award-giving.

NBC’s Up All Night took first place in the primetime comedy category for an episode titled “Birth” that was written by Caroline Williams and Emily Spivey. Producer-writer Tim McAuliffe, who accepted the award in their place, brought out a round of laughter from the audience when he noted—with just a touch of irony—that he’s “the only writer on staff who’s unmarried and has no children.”

“Obviously in a writers’ room on a comedy people don’t understand anything at all about health, so a resource like [Hollywood, Health & Society] is fantastic,” McAuliffe added.

In the new category of climate change, The Sunny Side Up Show on Sprout, a children’s show that airs on television and online, was the winner for an episode about sustainability and recycling. Based on the East Coast, the show’s writers Liz Filio and Jenn Santee sent their regrets for not being able to attend, and the Sentinel Award was accepted on their behalf by Kaplan, who quipped that they were “reducing their carbon footprint.”

Following the awards presentations, the writers and producers sat down for a brief, informal panel discussion—moderated by Buffington and Kaplan—where they talked about their inspiration, the challenge of crafting great storytelling week after week and responses they get from their show’s fans.

For McAuliffe of Up All Night, the subject of childbirth was very much on the minds of the show writers—he counted about eight or nine staff members who had babies in the past year alone. “It was funny for me because they had all lived it and I had no idea about this stuff,” he said.

“It was a really well-discussed episode,” he added. “It was kinda neat to see how much on Twitter and Facebook people were talking about it.”

Barbee of Touch said that she felt incredibly lucky to be on a show that told global stories, and pointed out that the episode’s storyline underscored just how similar we all are. “It’s about those universal connections where language is not important,” she said. “It translated no matter what language you spoke.”

Inspiration for 'Doc McStuffins'
Chris Nee, creator and executive producer of the hit Disney Junior animated series Doc McStuffins—a finalist in the children’s programming category for an episode titled “Ben/Anna Split” that tackled the worrisome topic of overnight hospital stays—said the idea for the show in general came about from her son’s bouts with childhood asthma.

“I had been in children’s TV for a very long time, and having a kid who ended up at the hospital all the time—I realized that no one had really made a show that demystified the process of going to a doctor for kids,” Nee said. “The truth is, they go all the time and it’s a huge deal. And it’s an incredible place for storytelling; there’s so much drama and comedy in the world we created.”

She also was gratified by the response of viewers to the show’s premise: a 6-year-old African-American girl with a magical, pink stethoscope who heals the boo-boos of her stuffed toys in her backyard playhouse, and dreams of being a real doctor someday.

Nee said that the show has resonated with young African-American girls, empowering them to consider being a doctor when they grow up. A group of African-American physicians—all of them women whose own wish to practice medicine came true—have also started an organization called We Are Doc McStuffins, with a growing presence on Facebook and Twitter. They see the show as a positive role model for others who may follow, including their own daughters.

Mark and Liz Kruger—brother and sister—said that the real-life inspiration for the character Dr. Dani Santino on Necessary Roughness (played by Callie Thorne) was psychotherapist Donna Dannenfelser, who started counseling high-profile athletes, actors, musicians and CEOs in the 1990s, and at one point was team psychologist for the New York Jets football team.

“Her life’s mission was to bring mental health issues to the forefront,” said Liz Kruger. “This [would be] a really big deal for her, that here we are all talking about this stuff.”

Remarkably, three other shows, Private Practice, Homeland and Parenthood—all finalists in the primetime drama category for major storyline—said the ideas for their episodes came about from deep, personal experience of colleagues and relatives close to home.

In the case of ABC's Private Practice, whose awards entry written by Shonda Rhimes, “Who We Are,” dealt with drug addiction and intervention, supervising producer Fred Einesman revealed that it was one of their own writers who wrestled with similar demons and managed to recover. “But they worried every day that they would slide back,” he said. “It meant a lot to tell that story, and in the end there’s redemption.”

With Showtime's “Homeland” episode, titled “The Vest,” producer and writer Chip Johannessen said the storyline for one of their show’s main characters, Carrie Mathison (played by Claire Danes), was partly inspired by writer Meredith Stiehm’s sister, who has bipolar disorder, and a trip she once took during a manic phase of her illness that lasted for a few days.

“Parenthood” (NBC) writer Monica Henderson Beletsky said that conversations she has had with her uncle’s son, who has Asperger’s syndrome, has given her more insight into potential stories centering on the show character Max Braverman, featured in two of the show’s episodes, “Nora” and “Tough Love,” that shared the honor of being named finalists.

“It just gives me more empathy for the character and the struggle of parents,” Beletsky said. “One thing we talk a lot about on the show is the mystery of Asperger’s—what’s going on in their [child’s] head. Sometimes you just don’t know what’s going on.”

“It’s a privilege to be a writer for television,” she said. “It’s just been a wonderful experience to work on a show where we get to tell health stories that touch people’s lives, including in my own family.”

The writers acknowledged that no matter where the idea for an episode came from, they often needed the help of a medical or health expert contacted through Hollywood, Health & Society to keep the storylines realistic and accurate.

Said Johannessen: “A bunch of us on Homeland came off 24, where the motto was, ‘we never do any research ever’ ... it was kind of a point of pride. But we do the opposite on Homeland.” And Einesman noted the level of work that goes into a medical show like Private Practice—and the absolute necessity of seeking guidance from experts—when he explained that the premise of their series is to come up with two medical-ethical debates per show. Production, he said, has just been completed for episode 104. Do the math, he seemed to say.

By the close of the 2012 Sentinel for Health Awards, the thread that ran through all of their remarks was simple: these writers are themselves fans of television, deeply invested in the stories they tell and how entertainment can be used to help people lead better and healthier lives.

“It’s rare when you work on something and that the stories you tell matter to some people out there,” Mark Kruger said. 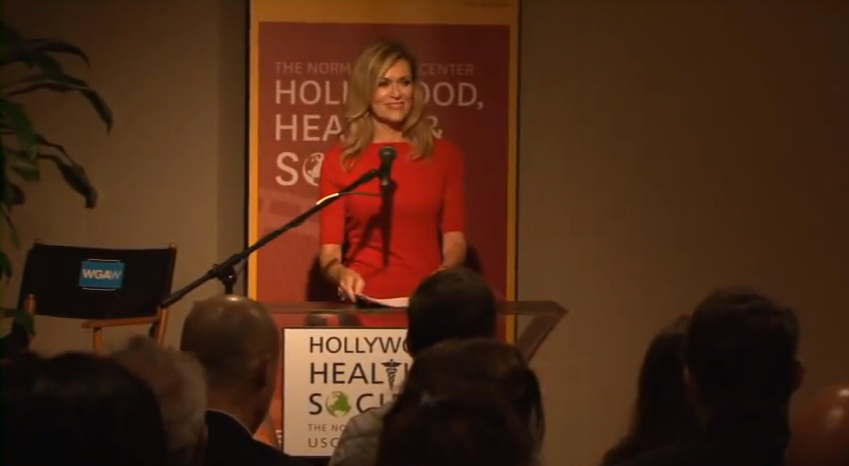