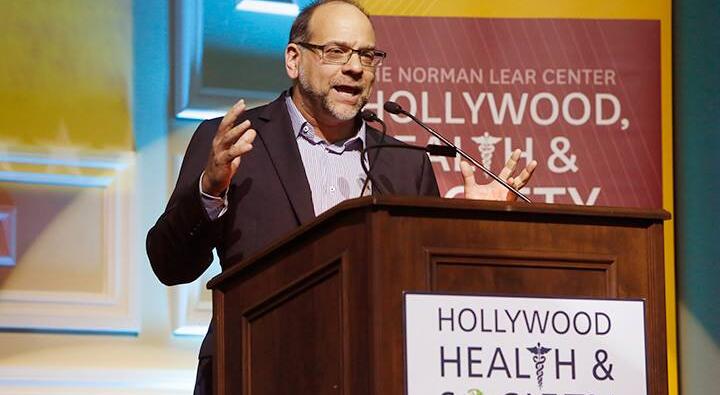 The awards are presented by Hollywood, Health & Society, a program of the USC Annenberg Norman Lear Center, and sponsored by the Centers for Disease Control and Prevention to recognize exemplary achievements in television storylines that inform, educate and motivate viewers to make choices for healthier and safer lives. Also honored at the ceremony was the ABC hit series Grey’s Anatomy, now entering its 10th season, in the Primetime Drama (Minor Storyline) category for an episode involving a recurring homeless patient whose drinking obscures a serious condition.

Accepting the award for Call Me Crazy was one of its writers, Howard Morris, who told the audience that mental illness is “very hard to dramatize, because it has no clear beginnings and certainly has no tidy endings.

“But it was our hope,” he added, “that maybe this movie would just make some people afflicted with it or the families who have dealt with it, feel less alone. I hope this award means that we’ve done that.”

The glittering event featured the appearance of producer Norman Lear, who introduced the award in the Primetime Comedy category, and his wife, Lyn, who presented the award for Climate Change to HBO’s Real Time with Bill Maher.

“Norman and I are delighted to be here, and so glad that the Sentinel for Health Awards now recognize climate change—clearly in my mind the most important issue on the planet,” said Lyn Lear, who’s been engaging the creative community on the topic, in part through the Environmental Media Association, which she co-founded nearly 25 years ago.

Quoting the Sentinel Award judges, she called the show a “potent mix of science, politics and comedy.”

“We’ve long maintained that environmental issues do not get enough attention,” said Real Time executive producer Scott Carter, in accepting the award. “We don’t think it gets enough attention from the media, for whom the planet’s destruction isn’t sexy enough. As Bill [Maher] often says, if we have no environment, then we have nothing.”

The comedy award went to HBO’s Enlightened, for its depiction of a character’s struggle during drug rehabilitation, and Norman Lear said the judges were “impressed by the accurate portrayal of what happens in rehab” and why people relapse. Equally impressive, he added, was the fact that “the show was able to find the human comedy in all that.”

“Mike’s going to be thrilled to have this on his mantel,” said Enlightened producer David Bernad from the stage, referring to the show’s creator and one-man writing staff, Mike White.

The HBO movie Mary and Martha, starring Hilary Swank and Brenda Blethyn, and written by Richard Curtis, won in the Global Health category for its story about two women who turn their personal grief into a call for action against malaria in Africa. In Children’s Programming, Disney Junior’s Doc McStuffins captured first- and second-place awards for storylines about heat exposure and allergies.

In a new category for the awards, Reality, HBO’s Real Sports with Bryant Gumbel won top honors for correspondent Soledad O’Brien’s report about a military veteran helping other vets who have post-traumatic stress disorder. Tony Walker, the director of sports for the show, called the segment “one of the most captivating and inspiring things we’ve ever done.”

For its portrayal of character Caroline Brady’s beginning struggle with Alzheimer’s, NBC’s Days of Our Lives was awarded first-place in Daytime Drama. Peggy McCay, the actress who plays Brady (and who was nominated for an Emmy) and her co-star, Mary Beth Evans, both took the stage to sing the praises of their writing staff.

“Bravo, writers,” McCay said. “They brought to life this family dealing with Alzheimer’s. It’s important to put a spotlight on this important story that resonates with so many people.”

The 72 entries submitted for judging—the most received thus far— spanned 15 networks and cable channels. All eligible submissions were reviewed for accuracy by experts at the CDC and partner organizations, and for entertainment value and potential benefit to the viewing audience by entertainment, academic and public health professionals.

For many loyal viewers, TV dramas and comedies provide both entertainment and information about disease, injury and disability. Through their portrayals of characters’ lives, writers and producers have a unique opportunity to touch viewers’ lives. The way a popular character deals with a personal health decision can prompt audience members to think about their own choices. A compelling storyline that demonstrates risky behavior and consequences, or shows how to avoid risk, portrays social determinants of health or examines global health issues, can benefit millions of viewers around the world.