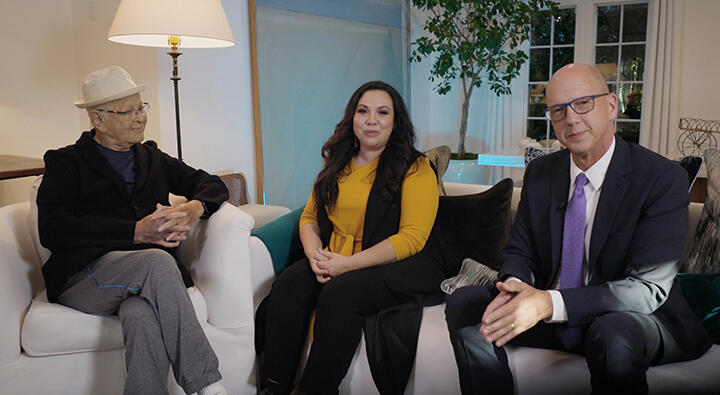 Producer Norman Lear is interviewed about his groundbreaking television career by event hosts Gloria Calderón Kellett and Mike Royce during the 2021 Sentinel Awards.

Hollywood writers/producers Gloria Calderón Kellett and Mike Royce co-hosted the 2021 Sentinel Awards, which this year honored NBC’s popular medical drama New Amsterdam with the “Imagining a Culture of Health Award” for the show’s entire body of work during its third season.

In addition to New Amsterdam, 11 other shows were celebrated for TV entertainment that makes a difference in viewers' lives, including The Good Doctor, Master of None, Euphoria, Pose, The Handmaid’s Tale, This Is Us and Grey’s Anatomy (full list below). Their storylines covered such topics as Covid-19, abortion, mental health, addiction and racism—mirroring a tumultuous year in American life.

Hollywood, Health & Society (HH&S), a program of the USC Annenberg Norman Lear Center, presented the awards during an online event livestreamed on Oct. 20.

The annual recognition of outstanding TV storytelling featured taped special appearances by two entertainment luminaries: Norman Lear, who turned 99 in July, and Rita Moreno, one of only a few performers to win an Emmy Award (OK, two Emmys), an Oscar, a Tony Award and a Grammy Award. Moreno kicked off the 2021 Sentinel Awards event by inviting viewers to “celebrate some of the best, bravest, most challenging entertainment of the past year.”

Later in the show, Lear was interviewed about his pioneering career in TV by Calderón Kellett and Royce, and the legendary producer behind groundbreaking shows such as All in the Family, One Day at a Time, The Jeffersons and Maude introduced one of the highlights of the evening—New Amsterdam receiving the “Imagining a Culture of Health Award.”

A recurring theme of the popular ABC medical series is the unequal access to affordable health care that many people face, and the storytelling centers on the dedicated staff at the hospital and its medical director, Dr. Maxwell Goodwin (portrayed by Ryan Eggold). The show’s setting is based on Bellevue Hospital in New York City—founded in 1736 and the oldest public hospital in the U.S.—and the NBC series won a 2020 Sentinel Award for an episode titled “Righteous Right Hand.”

“Throughout 2020 I realized how lucky I am to work with the incredible people who make up our cast and crew, with special thanks to our writers,” Eggold said in presenting the award to creator/showrunner David Schulner, executive producer Peter Horton and the writing staff.

Sterling K. Brown, the actor who portrays Randall Pearson on NBC’s hit series This Is Us, presented the award to the show for its storyline on racism, in an episode titled “Forty: Part One, Part Two.”

“Two-thousand-twenty was, shall we say, a complicated year,” Brown said. “Every day seemed to bring another heartache. But for the African-American community there was one date that seared into our hearts and minds above all others: May 25, 2020. The day when—handcuffed, gasping for air, with a policeman’s knee of his windpipe for eight minutes and 46 seconds—George Perry Floyd died.”

“We listened to the deafening silence that came from those in power,” he added. “And we rose up, demanding at last that the world realize and acknowledge that, indeed, Black Lives Matter.”

For the topic of HIV/AIDS, the award went to the FX series Pose, an affecting look at the Black and brown LGBTQ+ community set against the drag ballroom culture at the height of the epidemic in New York City in the late 1980s.

In accepting the Sentinel Award, Steven Canals, the executive producer/writer/co-creator, said the series, which wrapped up after three seasons with the death of the lead character, Pray Tell (played by Billy Porter), was “legacy work.”

“This is the story about the black and brown LGBTQ+ community living and dying of HIV/AIDS,” Canals said. “What an honor it’s been to shine a light on our oft-forgotten history. From their stories we have learned so much more about love, family and resilience. Through Pose, [we] centered how we collectively fought for our own rights during the height of the AIDS crisis, and continue to shift how the world sees us."

Hulu’s The Handmaid’s Tale was honored for a storyline about abortion in an episode titled “Milk,” and Madeline Brewer, who co-stars as Janine in the dystopian series, couldn’t help but note that the impact of the show’s storytelling has been heightened against the current political landscape.

“All of us on the show are aware of how terrifyingly relevant our show has become,” Brewer said. “It’s a surreal honor that the Handmaids’ red garments have become an iconic symbol of pro-choice and reproductive rights marches around the world.”

Much younger fans of Disney Junior's Muppet Babies would no doubt be thrilled that the animated series was recognized with an award for a storyline on children's emotional well-being. In the episode titled “Rowlf Gets the Blues,” Rowlf believes that he needs to hide his sadness and be a “brave little pup” while his mom’s away on a trip. Instead, he learns that sharing his true feelings is one of the bravest things he can do.

In true showstopping style during the livestream, Rowlf on piano and some other musical Muppet friends delivered a bluesy thank you to the show’s creative team, and to the Sentinel Awards for the honor.

Calderón Kellett and Royce were co-creators, co-showrunners and executive producers of the popular Netflix series One Day at a Time, a reboot of Norman Lear’s mid-1970s show with a Cuban American family. Calderón Kellett, a leading Hollywood voice in Latinx storytelling, and her GloNation Studios signed a deal in 2019 with Amazon Studios for developing projects. The first, With Love, is a one-hour series that’s scheduled to stream during the 2021 holiday season. Her previous writing and producing credits include How I Met Your Mother (CBS), for which she won an American Latino Media Arts Award for one of her scripts; Devious Maids (Lifetime); and iZombie (The CW).

Royce, a writer/producer/showrunner, won two Emmy Awards for comedy writing for the hit CBS series Everybody Loves Raymond, for which he also served as an executive producer. A former stand-up comedian, he’s the co-creator (with Ray Romano) of the TNT series Men of a Certain Age, which won a Peabody Award in 2010. His other credits include United We Fall, Dr. Ken (both ABC) and Enlisted (FOX).

The Bold Type (Freeform)
The Truth Will Set You Free
Topic: Breast cancer

For All Mankind (Apple TV+)
Rules of Engagement, And Here’s to You, Triage, The Grey
Topic: Nuclear safety/national security

This Is Us (NBC)
Forty: Part One, Part Two
Topic: Racism