20th Anniversary of "In the Gloaming" / HIV Panel 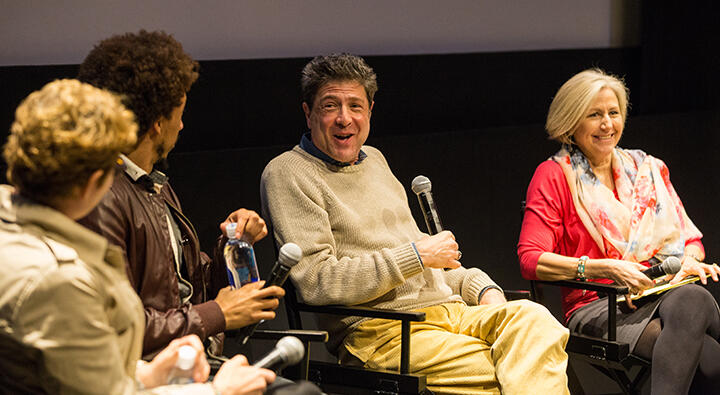 Michele Kipke (left), Thomas Davis, Will Scheffer and moderator Kate Folb during panel portion of event to mark the 20th anniversary of In the Gloaming. Photos: Josh Krause

In 1997, China resumed control of Hong Kong, ending 156 years of British rule. The Dow Jones Industrial Average closed above 7,000 for the first time. The New York Times reported that the number of AIDS deaths dropped 19% in the U.S. partly because of breakthrough drug therapies, while TV audiences tuned in to watch Ally McBeal, Friends, Buffy the Vampire Slayer, Third Rock From the Sun and The X Files.

Over on HBO, which had gained a reputation for edgy, provocative programs such as The Larry Sanders Show, Mr. Show and Oz later that year, an hourlong movie titled In the Gloaming offered an intimate look at the effect on an upper-middle-class family when Danny, a young gay man with AIDS, returns home to die. Based on a 1993 short story by Alice Elliott Dark, the movie was written by Will Scheffer, the co-creator of Big Love and Getting On who was then a rising playwright in New York. The film (nominated for five Emmys) was directed by the actor Christopher Reeve, who had been paralyzed in a 1995 horse-riding accident, and featured a strong cast led by Glenn Close.

In a 2015 online article ("HBO’s LGBT History"), Manuel Betancourt writes: “In the Gloaming shifts the conversation away from disease and bureaucracy and … hones in on the struggles of those on the outskirts of the epidemic; the loved ones left behind who had no language and no practice in a grief that so squarely demanded more than tolerance, more than acceptance.”

Hollywood, Health & Society commemorated the film’s 20th anniversary at the Ray Kurtzman Theater at CAA on March 30 with a screening of excerpts from the film, followed by a panel discussion on HIV and Hollywood. In addition to Scheffer, the featured guest speakers were Michele Kipke, co-director of the Southern California Clinical and Translational Science Institute (SC CTSI), who has been closely involved in research of the HIV/AIDS epidemic since its onset in the U.S; and Thomas Davis, a community coordinator for the Adolescent Trials Network at UCLA.

A review in Variety called Gloaming “rare in its utter lack of contrived sentiment, even when Danny’s near death. Credit a sparkling adaptation from New York playwright Scheffer. …The message of this film speaks to the resilience of the human spirit, a subject that director Reeve surely knows a thing or two about.”

Scheffer, who’s been HIV positive for more than 25 years, once led a life emblematic of a period of gay culture and history set against the early days of the AIDS epidemic, which he referred to as a “plague.” In a conversation onstage with HH&S Director Kate Folb, the writer-producer recounted his days as a struggling actor and promising stage writer—a “nice Jewish boy from New Jersey” who finds himself fresh out of arts school and in New York. In the gay community, there were early spoken warnings about a mysterious disease (AIDS didn’t even have a name back then.) Friends kept dying. The first HIV screening was introduced in 1985, and around three years later Scheffer said he worked up the courage. He tested negative.

Given his sexual history, “there was no reason for me to test negative,” Scheffer said. A sexual encounter two years later, however, proved fateful. Not long after, Scheffer said he became “terribly sick” with a sore throat and flu-like symptoms—often an initial indication of HIV infection. He said that he remembered thinking he was going to die, although his doctor held out some hope.

“I didn’t ever think I wanted to be in television when I was growing up, because there were no gay people on television. I never saw myself on TV. And that was traumatic. That made me want to not be gay.”—writer/producer Will Scheffer

But in both his personal and professional life, the stars began moving into alignment. He met someone and fell in love. Then, the opportunity to write In the Gloaming came along. Scheffer called it fate.

A series of monologues that he had written about being gay caught the attention of HBO, which staged them in Los Angeles as part of a new writers project. “That was my introduction to Hollywood,” Scheffer said. An executive at the cable network approached him with Dark’s short story. Would he be interested in writing the screenplay—his first—for TV?

“I didn’t ever think I wanted to be in television when I was growing up,” he said, “because there were no gay people on television. I never saw myself on TV. And that was traumatic. That made me want to not be gay.”

With In the Gloaming about to begin shooting, Scheffer remembered being on the set and dealing with the awful side effects from taking his first HIV drugs, which included AZT.

“It was a weird moment in time,” Scheffer said. “The movie was a marking point where things were just starting to change” as new drug therapies emerged to treat the disease.

As a young researcher in the ‘80s, Kipke found herself in the same place as Scheffer when the AIDS epidemic hit in New York City. She described herself as an “eager, excited doctoral student” at Albert Einstein College of Medicine and Montefiore Hospital in the Bronx.

“Back [then] if you were doing anything in healthcare you couldn’t help but get swept up in this tidal wave,” Kipke told the audience. “I was very fortunate to be part of one of the first CDC teams that were trying to figure this out.” She frequented methadone maintenance clinics trying to understand why injection drug users were becoming infected.

“As we look back on the epidemic, in some respects so much has changed, and so much remains the same,” she said. “Treatment and prevention efforts are so much better. As soon as someone tests positive for HIV, the focus is to get them on antiretroviral drugs early.”

For many people, Kipke said, living with HIV can be managed like a chronic illness.

But she added that treatment and prevention strategies are failing in the highest-risk group that continues to have the greatest number of new infections—young men of color, ages 16 to 24, who have sex with other men. Kipke listed several barriers: stigma, racism, discrimination, homophobia, internalized homophobia and mental health challenges.

“Until we figure out how to deal with all this, we’re not really going to be successful in managing this epidemic,” she said.

The evening included a series of clips showing HIV/AIDS in TV entertainment over a 20-year arc, starting with the movie An Early Frost and ending on How to Get Away With Murder, the hit ABC show that had featured a committed and loving gay couple, Connor and Oliver. After Oliver tested positive for HIV in season one, Connor went on a daily PrEP drug regimen to lower his chances of getting infected.

Clearly, progress has been made in LGBT representation since the days when Scheffer, as a 13-year-old, looked at TV and saw no one like himself.

“There’s a lot more acceptance for gay people, and it’s wonderful,” he told the audience. “But we’re [doing a disservice] when we romanticize the progress we’ve made. We don’t have to be so worried about how we’re represented.” Instead, Scheffer sees the need for “true stories” that resist any sort of pressure to color LGBT life in such a nice and neat way that issues like internalized homophobia, stigma and discrimination are ignored.

“I’d like to see imperfect gay people—the parts of being gay that remain a struggle,” Scheffer said. The kind of stories, he added, that show LGBT people are human, and that we’re all in this together. ◼︎