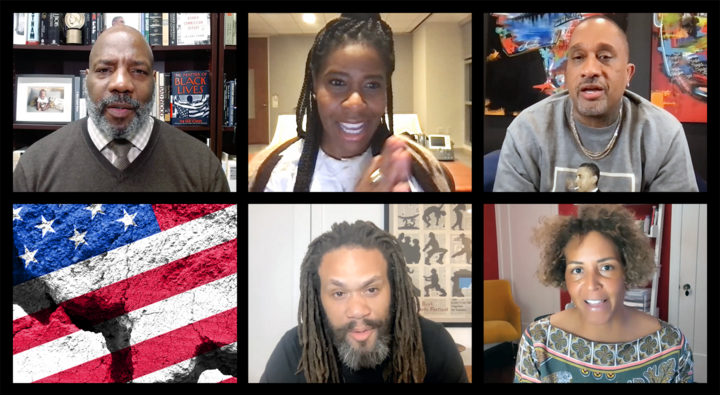 Few studio and network executives today probably know that the landmark 1968 Kerner Commission ever existed, or what it aimed to accomplish. Now, five decades after it was convened to examine the causes of civil unrest in American cities, the commission served as the jumping-off point for a discussion about Hollywood's part in helping to heal a divided society.

Presented by The Norman Lear Center and its Hollywood, Health & Society program, and moderated by the award-winning journalist Jelani Cobb, a writer for The New Yorker and professor at Columbia University, the webinar featured producer Kenya Barris, the creator and former showrunner of the ABC comedy franchise black-ish; Elle Johnson, a TV writer and author whose credits include Law & Order, CSI: Miami and Bosch; Tara Duncan, president of Freeform channel; and Franklin Leonard, a film/TV producer and founder/CEO of The Black List.

Opening remarks were made by Martin Kaplan, founding director of the Lear Center; Alan Curtis, president and CEO of the Milton S. Eisenhower Foundation (the successor to the Kerner Commission); and producer Norman Lear.

As the creator of the groundbreaking CBS comedy series All in the Family, Lear regularly held a mirror to bigotry toward Black people (and others) through the foul-mouthed character Archie Bunker. When the show first aired on Jan. 12, 1971, the network warned audiences of the racial language to follow.

Looking back at the show, Daniel Levy in a February 2021 article in Time wrote: “With All in the Family, the discord on the nation’s streets had finally leaped … [to] nightly entertainment.”

What started out ostensibly as a look at the role of the arts in building “new will” to help fulfill the Kerner Commission’s promise to reduce racial injustice and inequality, quickly evolved into a passionate discussion among the speakers about the state of Hollywood itself and its own lack of diversity.

“The most damning thing about Hollywood is it’s the least diverse business sector in America,” Leonard said.

In an April 2021 opinion article in The New York Times, Leonard wrote that Hollywood’s anti-Black bias costs billions in revenue, citing a study done by the consulting firm McKinsey and Company titled “Black Representation in TV and Film.” Leonard once worked for McKinsey and urged the company to do the study.

In The Times article, Leonard wrote that the McKinsey study “concluded that America’s film industry … [and its] systemic anti-Black biases cost it at least $10 billion in annual revenue. Black content is undervalued, underdistributed and underfunded, the analysis found. It also found that Black talent has been systematically shut out of creator, producer, director and writer positions.”

When the Kerner Commission issued its 426-page report 54 years ago, Cobb said, it was expected to be a standard Washington, blue-panel investigation full of fuzzy bureaucratic language.

Instead, Cobb said, the panel composed of 11 moderate, bipartisan members—nine of whom were white—“produced one of the more noteworthy and stinging indictments of American racism” and police brutality.

“The commission’s report examined not only the foundational institutions such as policing, education, healthcare and employment, but it also looked at the role of media,” Cobb said. In fact, it spoke about the overwhelming whiteness of the news media, its failure to give unbiased coverage of the riots, and “adequately report on African-American life or to employ more than a token number of Blacks.”

Which brings us back to Hollywood.

The panel members agreed that the entertainment landscape shifted after the killings of Trayvon Martin, George Floyd, Ahmaud Arbery, Breonna Taylor and too many others, sparking protests worldwide and establishing the Black Lives Matter movement. But much still needs to change.

“The landscape has changed dramatically in the last five years,” Duncan said. “When I started out these were issues that I was reticent to speak about out loud. Making changes felt insurmountable. Now there are so many content platforms and competition for audiences’ attention. Since George Floyd, there’s been a shift, a social reckoning. Companies are focusing on appealing to everyone.”

What hasn’t changed, she said, are the people who are in charge.

“The higher you go [in Hollywood], the fewer Black faces you see,” Duncan said. "The issue is getting more Black executives in positions of power to green-light projects.”

Leonard said that any changes are “not because the people running things have woken up to a new reality.”

“It’s that slowly but surely extraordinarily talented people have worked their way up to positions of power,” he added.

“The higher you go [in Hollywood], the fewer Black faces you see.”—Tara Duncan, president of Freeform

Duncan, Johnson, Barris and Leonard all marked the murder of Floyd in 2020, especially, as a personal touchstone in how they see and approach their work.

Johnson said she was struck by global reaction to the death of Floyd, and the voices of a young generation that could possibly make a difference.

“[Now] I want to work on projects that go beyond entertainment,” she said. “It needs to have a deeper purpose [and explore] themes and topics of what’s going on in the world. But we’re still having to deal with the [Hollywood] gatekeepers who are overwhelmingly white.”

Duncan acknowledges that by the time of Floyd’s murder, she was already exhausted and full of despair. For her, a feeling of being “broke” began with the death of 17-year-old Trayvon Martin in 2012. Martin was fatally shot by George Zimmerman, a neighborhood watch volunteer, who claimed self-defense under Florida's infamous "Stand Your Ground" law. Martin, who was unarmed, had just been to a convenience store to purchase a bottle of iced tea and a bag of Skittles.

Said Barris: “I remember that day. I had to fight the numbness. But if George Floyd could give his life, then I just can’t sit around and do nothing.”

In September 2021, Barris unveiled a deal with ViacomCBS to launch the BET Studios content production venture in partnership with Parks and Recreation co-star Rashida Jones and writer-producer Aaron Rahsaan Thomas.

Alluding to the McKinsey study that found that Hollywood loses billions in revenue by ignoring Black creative talent and content, Barris said the powers-that-be will fight against their own self-interest to hold down certain stories.

“The price of Black life doesn’t really count in Hollywood,” he said.

So was it time, as Barris seemed to indicate at one point, for Black talent to go its own way, which Cobb likened to a “Wakanda moment.” Is a Wakandawood even possible?

What Black audiences want from Hollywood

Barris said the power and viability of Black audiences in the entertainment market is evident. For one, as Duncan pointed out, Black women watch more TV than anyone else. In fact, as reported by the online metrics website Statista, TV consumption in the U.S. in 2019 was highest among African Americans, who watched an average of 3.23 hours each day.

According to the latest UCLA Hollywood Diversity Report, of the top 185 films of 2020, "more than half were released via streaming platforms only. Latino and Black adults consumed online content at higher levels than other groups. Of the films that had a theatrical release, minority audiences accounted for the bulk of ticket purchases."

And then there’s the case of Coming 2 America, released in March 2021.

The Amazon Prime sequel to the 1988 film, produced and starring Eddie Murphy and co-written by Barris, was the most-streamed title in the country the week of its premiere, according to audience data.

“It did in one day what [Amazon] thought would take 28 days” in the number of viewers, said Barris, who called it a game changer.

Indeed, three months after Coming 2 America was released, Amazon Studios released a new inclusion playbook for collaborators “with the aim of fostering underrepresented talent in hiring, development, and production.”

Do standardized calls for inclusion and diversity help?

“[The Amazon playbook] is similar to the inclusion standards we adopted across Disney entertainment,” she said. “I think they help. The standards are not optional, they have to be met.”

In addition to running Freeform, Duncan is head of the newly created Onyx Collective, a content brand under Disney General Entertainment that is committed to inclusive storytelling from creators of color and underrepresented voices. Under the umbrella, she acquired Ahmir “Questlove” Thompson's documentary feature Summer of Soul (... Or, When the Revolution Could Not Be Televised), which won a 2022 Academy Award. Onyx Collective’s first scripted project, the legal drama Reasonable Doubt, was also recently ordered to series at Hulu.

In his remarks at the beginning of the webinar, Curtis of the Eisenhower Foundation indicated that the nation stands at a critical point in time. Not only has the Kerner Commission's work not been fulfilled, he said, but "in many ways we've gone backwards."

To a list of policy remedies that would make things better—from stronger unions to genuine partnerships between community organizations and the police—Curtis added the role of the arts in instilling "dignity and empathy into American culture."

Leonard took a more purely pragmatic view. "The lingua franca of [American] culture is movies and television," he said. "The stuff that most people consume. Those that tell the country’s stories hold the power."

The online discussion was co-presented by The Andrew W. Mellon Foundation, the Trustees of the Milton S. Eisenhower Foundation, the Writers Guild of America, and Harvardwood.