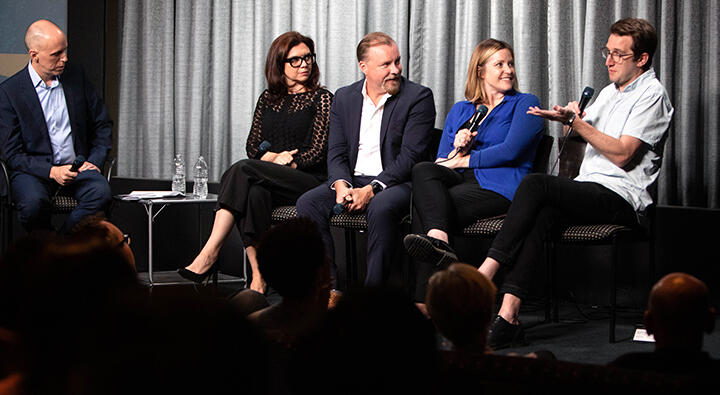 At one point during the discussion on how Hollywood can help change the narrative about drug addiction and mental health, screenwriter John August ("Aladdin"), the panel moderator, asked the speakers on stage to recount something they had seen in a film or on TV that they didn’t want to see anymore.

August called this exercise “Please Stop”—a plea that he said was directed at writers, producers, directors and, in some cases, even prop masters. For August, it was the sheer amount of alcohol that audiences see characters drink when they do have “a few too many.”

“The volume of drinking they do is physically impossible,” August said. “They would be dead.”

As the co-creator and executive producer/writer of Mom—a show about a single mother in recovery—Gemma Baker’s beef was with 12-step meetings and their dialogue of despair—as when a character somberly introduces themselves during share time (Hi, I’m Bob …) and everyone in the room replies in affirmation with a mournful Hi ... Bob. As fans of the CBS show know all too well, life and laughter don't stop at the doorway to recovery group meetings.

Holly Daniels, the clinical affairs director of the California Association of Marriage and Family Therapists, wanted the media to stop portraying addiction and mental illness as anomalies when actually 25% of people have a diagnosable mental health issue.

The National Alliance on Mental Illness (NAMI) reports that 1 in 5 adults in the U.S. (46.6 million) experiences a mental illness in a given year, while a Pew survey revealed that nearly half of U.S. adults have a close friend or family member with a current or past substance-use disorder. The NAMI website cites a 2014 National Survey on Drug Use and Health that found 7.9 million people in the U.S. experience both a mental disorder and substance-use disorder simultaneously, using "alcohol or other drugs as a form of self-medication for their mental health symptoms."

As a fellow at Northeastern's Health in Justice Action Lab, Siegel helped create #ChangingTheNarrative, which his website describes as "a digital toolkit to help reporters, policymakers, and other influential communicators avoid inaccurate, stigmatizing, and harmful tropes that plague the field of addiction."

Siegel's own personal story involves an opioid-use disorder at the age of 17, which progressed to heroin.

"As a young, anxious teenager trying to figure out what the world is like, I took an opioid and finally felt normal," Siegel told the audience. "With opioids, the clouds parted, and that could be a very dangerous feeling for a teenager."

His first media exposure to the allure of drug use was The Basketball Diaries, the 1995 movie based on author/poet Jim Carroll’s coming-of-age autobiographical work that starred Leonardo DiCaprio about a stand-out high school athlete in New York City who uses heroin.

In depicting mental illness and substance-use disorder, August mentioned the risk of "contagion," and said the challenge for film and TV is striking a balance between realism and glamourization.

"Can Hollywood Change Attitudes About Addiction and Mental Health?"

"There’s a fine line in popular entertainment [that needs to be carefully followed] so that the visuals are not more triggering than they need to be," Daniels added.

Just two years ago, the Netflix show 13 Reasons Why was sharply criticized by suicide-prevention experts for its portrayal of a high school student who takes her own life, with concerns that it might provoke real-life attempts. A 2017 article in The Atlantic reported on a study that was done following the premiere of the streaming series, which found that Google searches for suicide and methods increased by almost 20 percent. In the article, the research authors said their findings (published in the Journal of the American Medical Association) "suggest 13 Reasons Why, in its present form, has both increased suicide awareness while unintentionally increasing suicidal ideation.”

One show that seems to walk a fine line is Mom, which manages to make addiction and recovery funny and hopeful, while allowing for some real-life knocks. Both topics have been used as a springboard for dealing with other issues such as teen pregnancy, overdoses, domestic violence, cancer and homelessness.

Baker said that the show started out as an idea for a half-hour comedy about a single mother with an addiction, but the producers later decided that having the character in recovery would be better.

“You could root for her because you knew she was trying to change,” Baker said. "Recovery is not the end of the story, it’s the beginning."

August taped “Scriptnotes,” the weekly podcast he co-hosts with fellow screenwriter Craig Mazin, during the discussion. The event was also streamed on Facebook Live at facebook.com/HollywoodHealth.