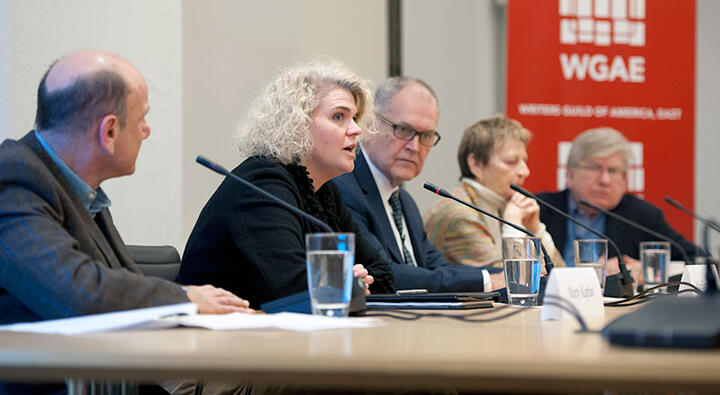 At the Obamacare panel at the WGAE (above, from left): Marty Kaplan, Julie Green Bataille, Wendell Potter, Trudy Lieberman and Michael Winship. Photo by Dana Maxson

Lost in all the white-hot noise over the recent rocky roll-out for Obamacare enrollment—with a glitchy government website and revelations that many people would not be allowed to keep their current coverage, despite what the president promised—was an overlooked but important fact: the Affordable Care Act had fundamentally changed how health insurance companies could operate.

Gone were the days when someone could be denied coverage for a pre-existing condition, or have their policy dropped after they received a medical diagnosis because the insurance company would just rather not pay for it. And losing one’s job no longer meant joining the ranks of the uninsured.

The fact that Obamacare has caused a sea change in the country’s health care system that essentially affects everyone was underscored in the recent panel conversation, "The Affordable Care Act: Comedy, Drama & Reality—Portraying Obamacare in TV and Film," presented by Hollywood, Health & Society in collaboration with the Writers Guild of America, East at the WGAE headquarters in New York.

The panel’s members were: Julie Green Bataille, director of the Office of Communications, Centers for Medicare & Medicaid (CMS); Wendell Potter, former head of communications for the giant health insurance company Cigna and author of Deadly Spin: An Insurance Company Insider Speaks Out on How Corporate PR Is Killing Health Care and Deceiving Americans; and Trudy Lieberman, a veteran journalist who has written extensively about health and health-care coverage. Marty Kaplan, director of The USC Annenberg Norman Lear Center, and Michael Winship, president of the WGAE, served as co-moderators.

“We’re thrilled to be here,” said Kaplan in his opening remarks. “We’re talking about storytelling, really, so we are fortunate tonight to have three storytellers who approach health care from different and complementary vantage points.”

Kaplan introduced a “whirlwind tour” of clips that illustrated how access to health care has already been depicted in the entertainment media—TV shows that included The Simpsons, Scrubs, Glee, 30 Rock, Friends, Shameless, 2 Broke Girls, Grey’s Anatomy and Nurse Jackie.

But overall, the panelists agreed that the story of Obamacare itself has not been told well, emphasizing that it’s a huge and complex law that’s been sharply politicized.

“The public is not being well served by the media,” said Potter, who left Cigna, one of the country’s largest health insurance companies, in 2008 and became an outspoken critic of the industry. “[Explaining Obamacare] can’t be done in sound bites,” he said. “You can dismiss something, you can defame something with a sound bite, but it’s much more challenging to provide the appropriate context when something is this complex.”

“This law has been so stretched by both sides in this debate,” Lieberman said. “It’s very difficult to find out what’s going on. [People] don’t know who to believe and where to turn.”

Bataille, whose office at the federal CMS agency was charged with getting the right kind of information out to the public about health care, acknowledged that mistakes were made. “The story we’ve been trying to tell is not always the one many people have read,” she said. “There has been an enormous political conversation that frankly confused some people and turned off other people altogether.” Bataille added that it will get easier over time as more real people are benefiting from the law and different provisions go into effect.

“It’s not so much that we have to explain it,” she told the panel’s audience, “but more that if people can see other individuals like themselves benefiting, it will start to be meaningful.”

She singled out Latinos as one community that could really be helped. “Spanish-speaking communities are very important to Obamacare,” Bataille said. “Look at the rate of heart disease and lack of access to care and preventive services in Latino communities. We have a huge effort to make sure Latinos know the benefits of the law and take advantage of it.”

Lieberman pointed out that despite being a big, sprawling law, Obamacare is really a “patch”—or more of a band-aid—for an ailing and inadequate health care system. “It was never meant to be national health insurance,” she said. “It’s intended to help primarily people who don’t have very much money, and we don’t like to do that very much in this country.”

Kaplan asked the panel if writers would want to focus on those people who are poorer in telling stories about Obamacare through scripted entertainment, but Potter said the narrative casts a much wider net than that.

“It benefits all of us in ways that people don’t realize,” he said. “We all, in this country, are just a layoff away from being uninsured.”

When prompted by Winship to explain why he left Cigna and changed his mind about where he stood on access to health care, Potter launched into one of the most compelling stories of the night.

Potter first recalled the expectation in 2007, while he was still at Cigna, that he would play a significant role in trying to discredit filmmaker Michael Moore, whose documentary Sicko was just coming out. The health care industry was very concerned about what kind of impact the film might have on any kind of reform, Potter said, and he flew to Sacramento to see the movie’s first screening to come up with a strategic plan to defend his company, which was mentioned in the film, and, at the same time, “push Moore off a cliff.” A PR firm in Washington was hired to launch a sophisticated campaign to discredit the filmmaker.

Potter pointed out that there was an election coming up in 2008, “and if Democrats won there would be legislation on health care and we wanted to make sure that any legislation was not single-payer.”

Shortly after, Potter was visiting his home state of Tennessee when he saw an article in a local paper about a “health care expedition” being held in a nearby Virginia county that was organized by Remote Area Medical. The group’s original mission was to fly American doctors to remote areas around the world where there was no health care, but more and more it was being asked by communities to hold their clinics in the U.S. Curious, Potter paid a visit to the expedition, which was being held on county fair grounds. Everyone, in effect, was being treated in and around animal stables, Potter said.

“There were people waiting in incredibly long lines,” he said, “willing to stand in line all day to get medical care. I was finally able to see something that I would not allow myself to see—the extent that people had to go through to get care. That could have been me if my circumstances had been just a little different. I was helping to perpetuate a system that made it necessary to stand in line like this to get care.”

The final break with his old life, Potter said, came after a high-profile case in which his company refused to authorize a transplant for a 17-year-old girl in Los Angeles. The decision sparked a “PR nightmare,” forcing Cigna to eventually relent.

“She died five hours after the company reversed itself,” Potter said. “I had a crisis of conscience, and came to terms about what I was doing for a living.”

Potter didn't see the ACA as a grand plan for “socialized medicine” or a “government takeover of health care”—the law, after all, was based on Republican think-tank ideas—but instead called it an important first step in the evolution of the nation’s health care system, setting things on a better course. Future changes, he said, were more likely to come out of the states or private sector and not Washington.

For now, though, there was plenty enough work to do in getting it right this time, and persuading more people to enroll by the March 31 deadline.

“Fundamentally it’s about better access to health care and driving down costs,” Bataille told the audience. “I can’t tell you the number of emails that I get from people who have stories to tell—some good, some bad—and we know we’ve been able to help them. That, at the end of the day, makes it all worth it.”

Affordable Me: Obamacare on the Ground & on Air