Affordable Me: Obamacare on the Ground & on Air 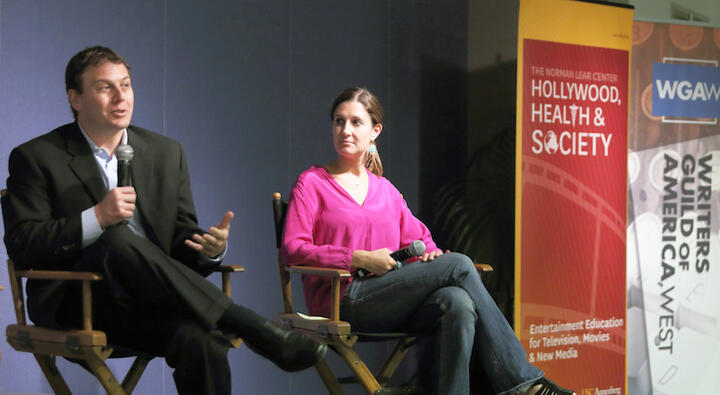 One only had to look at a montage of video clips from TV shows presented at Hollywood, Health & Society’s July 22 panel on health-care coverage, Affordable Me: The Face of Obamacare On the Ground & On the Air, to see how far we’ve come.

Like an archeological site, older shows such as Friends and Scrubs revealed a pre-Obamacare world in which featured characters presented themselves in medical situations without health insurance. In one short clip, from an episode of Grey’s Anatomy from Season 7 that aired in 2011, a doctor impulsively marries a patient with a rare disease to provide him with her coverage so that he can continue receiving treatment.

Since the passing of the Affordable Care Act, of course, the landscape of TV representation has been remade, and one realized things had changed dramatically—or hilariously, in this case—when the young woman character named Max on 2 Broke Girls loudly proclaims that “we’re all entitled to Obamacare—that’s what that Rachel Maddow guy said.”

“Twenty million people have enrolled in Obamacare—a great story,” said Martin Kaplan, director of the USC Annenberg Norman Lear Center, in his introductory remarks to the panel members and audience. The Congressional Budget Office is expecting enrollment in private health insurance plans under the ACA to increase by 13 million in 2015.

The event’s featured speaker was Dr. Zoanne Clack, executive producer of Grey’s Anatomy and co-chair of the HH&S advisory board.

Focusing on the topic for tonight’s panel—health insurance—Zoanne recounted her early days as a young physician deciding to go into emergency medicine. She reasoned that since the law mandated that hospital ERs treat everyone who came in the door, regardless of their health-care coverage status, this was a place where she could avoid “the whole insurance issue.” But she discovered that even in the land of ER, insurance was a large factor in patient care and follow-up treatment for many.

Clack said she sees her position as executive producer for one of the top medical shows on TV as working for the greater good, and that public health messages delivered through the power of entertainment have the potential to save lives.

The tradeoff that she made in her own life—ER doctor for TV writer—was a good one, she told the audience. “As an ER doctor, even if I did a 12-hour shift, I would probably see an average of 35 people. Maybe each of them told two people about diabetes. On Grey’s Anatomy, we reach 8 to 15 million people a week, and that’s just in America.”

A beginning Q&A with the TV writers, moderated by Kaplan, was followed by small break-out groups anchored by Smith, Schore, Marinis, Clack and Lutsky. In these sessions, focusing on mental health, youth, immigrant families and ER care, the health experts/activists organized presentations from “community storytellers” who offered their real-life experiences.

These stories included a young woman named Wynne Lee, a student at Diamond Bar High School, who suffered from depression and thoughts of suicide after repeated bullying in school; Lee eventually found help and support through the mental health services offered by the Asian Pacific Family Center. Maria Vasquez recounted how her family’s “mixed-legal status” precluded them from applying for any public health benefits over fear of deportation. Medical bills were paid by her husband in cash, until a daughter’s illness became too costly. Vasquez’s family situation is shared by a large number of Latinos. According to the Pew Research Center, about 9 million people are part of families that include members who are in the United States legally as well as some who are here illegally.

The fact that Obamacare remains out of reach for undocumented immigrants proves both inhumane and costly. Lutsky talked about his residency training at County Harbor-UCLA Medical Center, one of the busiest Level 1 trauma operations in the city that, like a lot of ER units in hospitals throughout the country, treats a large number of low-income and uninsured residents. Lutsky said that many of the patients who arrive at Harbor-UCLA have illnesses—long neglected because of their lack of coverage—in advanced stages. The medical costs are eventually absorbed by the nation’s health care system.

It was these case stories from real people—some still struggling without health care—that made one realize how far we still have to go.