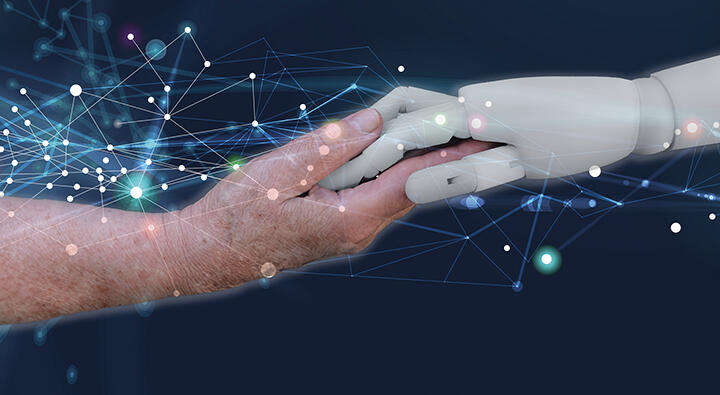 The potential uses of artificial intelligence in caregiving range from predicting illness to enriching daily life through virtual reality.

Hollywood, Health & Society presented a "lunch and learn" webcast that explored the ways artificial intelligence will revolutionize how we grow older—from predicting illness to enriching daily life through virtual reality.

Panelists for the discussion were:

SARITA A. MOHANTY, MD, MPH—Sarita Mohanty serves as the president and chief executive officer of The SCAN Foundation, one of the largest foundations in the United States focused on improving the quality of health and life for older adults. Its mission is to advance a coordinated and easily navigated system of high-quality services for older adults that preserve dignity and independence. Previously, Sarita served as the vice president of Care Coordination for Medicaid and Vulnerable Populations at Kaiser Permanente. She was previously assistant professor of medicine at USC; chief medical officer of COPE Health Solutions, a health care management consulting company; and senior medical director at L.A. Care, the largest U.S. public health plan. Sarita completed her internal medicine residency at Beth Israel Deaconess Medical Center, and research fellowship at Harvard Medical School. She earned her MD from Boston University, MPH from Harvard University, and MBA from UCLA. She currently is an associate professor at the Kaiser Permanente Bernard J. Tyson School of Medicine and is a practicing internal medicine physician with Kaiser Permanente.

EMILIA JAVORSKY, MD, MPH—Emilia Javorsky is a physician-scientist who leads the Future of Life Institute’s lethal autonomous weapons policy and advocacy efforts. Outside of FLI, Emilia researches and develops energy-based medical devices, including a novel method of therapeutic hypothermia she co-invented while a researcher at Harvard Medical School. Previously she co-founded and was chief scientific officer of skin health and photo-protection company, Sundaily, through its acquisition in 2020. She also directs the non-profit Scientists Against Inhumane Weapons, is a visiting scholar at the Wyss Institute at Harvard, and has authored over a dozen peer-reviewed publications and patents. Emilia cares deeply about harnessing technology to forge a brighter, equitable, and vibrant future for humanity.

KATE FOLB (moderator), M.Ed—Kate Folb is the program director of Hollywood, Health & Society, and a veteran for more than 20 years in the entertainment education field. After an early career in TV and music production/management, Kate joined the Scott Newman Foundation as director of special projects. She worked with top TV shows and films on portrayals of alcohol and other substance abuse, developed a media literacy program for students and produced the foundation’s annual public service announcements. Later, she spent nearly 10 years as director of The Media Project, a partnership of Advocates for Youth and the Kaiser Family Foundation that addressed portrayals of adolescent reproductive health in the media. Previously, Kate led Nightingale Entertainment, a consulting firm whose clients included the Robert Wood Johnson Foundation and Planned Parenthood.