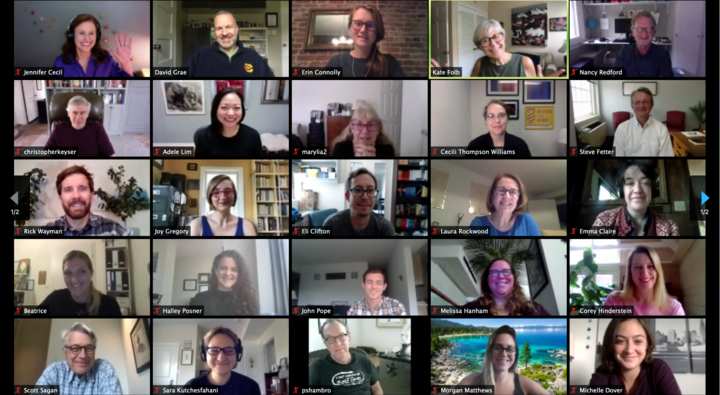 Some of the participants in the Atomic Storytelling 2.0 workshop held on Zoom.

Back by popular demand, Hollywood, Health & Society organized a storytelling workshop for nuclear and security experts for the second consecutive year, this time a virtual four-day event held in mid-September that included 25 members of the atomic community Zooming in from locations such as the U.K., Vienna and Washington D.C.

"Atomic Storytelling 2.0" was led by TV writer/producer Jennifer Cecil (Private Practice, Brothers & Sisters, Hostages, and the upcoming Fried Green Tomatoes), who conducted last year's workshop for professionals in the health field. It covered the fundamentals of storytelling, including story arc, character and setting, and drew representatives from The Bulletin of Atomic Scientists, Global Zero, Beyond the Bomb, ReThink Media, the 2017 Nobel Peace Prize-winning International Campaign to Abolish Nuclear Weapons, the Nuclear Threat Initiative, Stanford University and others.

The goal of the interactive workshop was to learn and practice narrative techniques to communicate messages more effectively. Examples from film and TV excerpts illustrated points and included nuclear-themed episodes from The West Wing, Madam Secretary and Manhattan. Participants focused on the components of a writer’s toolkit: they employed emotion, vividness and clarity to the writing, tapped memories, evoked inspiring characters from their lives, and determined defining conflicts in scenarios. Another objective was for everyone to develop a short piece to share with the group at the end of the week—and beyond.

The session on Day Two brought in a group of five film and television writers/producers to head up breakout groups, which included David Grae (Madam Secretary, Without a Trace), Adele Lim (Crazy Rich Asians, Lethal Weapon), Paul Redford (The West Wing, Designated Survivor, The Newsroom), Joy Gregory (Madam Secretary, Jericho) and Chris Keyser (Tyrant, Party of Five). Possible storylines were based on two options: world nuclear hotspot (North Korea, to name one example) or a key issue such as nuclear accidents. Each team then delivered their pitch and received feedback from the entertainment professionals.

The workshop launched into high gear with these compelling story ideas ranging from a satirical approach to an ethical debate, a fake viral video scenario to real intergenerational conflicts. Wednesday’s session featured Cecil guiding the group through exercises to inspire more material. In one, Cecil asked them to imagine that a nuclear attack was just 15 minutes away. What do you do? This prompted some powerful and often poignant stories full of vivid details and some surprising twists. The next stage—climactic resolution—followed before the day's instruction wrapped up.

On the workshop's final day, the guest writers returned for readings to provide critiques and positive encouragement. They were impressed with the caliber of the 10 stories that the participants shared, and they offered constructive ideas on taking the stories to the next level, with evocative titles such as Chasing the Bomb, Not the West Wing and Baghdad Is Burning.

The workshop will be followed by an online storytelling event in early 2021 that will deliver presentations to a broader audience of TV and film writers and others. So until then, consider this just an intermission.