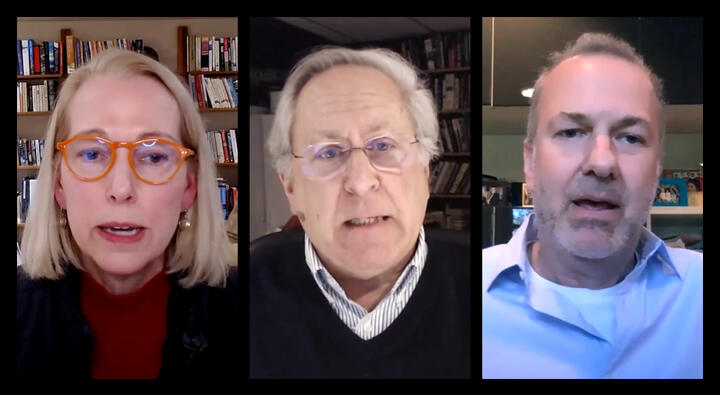 Panelists on Ukraine-Russia nuclear security issues were Joan Rohlfing, president/COO of Nuclear Threat Initiative; David Hoffman, a contributing editor for The Washington Post; and TV producer/writer David Grae from Madam Secretary, who served as the moderator.

It’s a nightmarish scenario ripped right out of television or movie storytelling: A rogue authoritarian nation threatens the world with catastrophic nuclear consequences if the U.S. or NATO allies interfere with its unprovoked invasion of a neighboring country.

Only this time the events are real.

Co-presented by Hollywood, Health & Society and the Nuclear Threat Initiative, a nonprofit global security organization focused on reducing nuclear and biological threats, the online panel discussion "Back to the Future: Ukraine, Russia and Averting Nuclear Catastrophe" featured experts who explored the future of diplomacy and nuclear security.

Grae opened by asking the panelists to gauge the risk of nuclear confrontation, and from there the discussion went from 0 to 60 in a heartbeat as Rohlfing and Hoffman shared decades of experience about the current risks, and how quickly things could go seriously sideways through sudden miscalculations and escalations.

“The chance of blundering into a nuclear war is much greater,” said Rohlfing, who explained that the country's nuclear posture—a system based on mutual vulnerability with the Soviet Union—was put in place in the 1950s. It was a much slower world then, she added, with two [superpower] adversaries.

"My hope lies with the notion of 'after Putin,' " Hoffman said. " I think after Putin, there will be a new political view in Russia, and that will help us work towards a nuclear weapon-free world. My hope is that Ukraine frees Russia."