Beyond Bars: Changing the Narrative on Criminal Justice 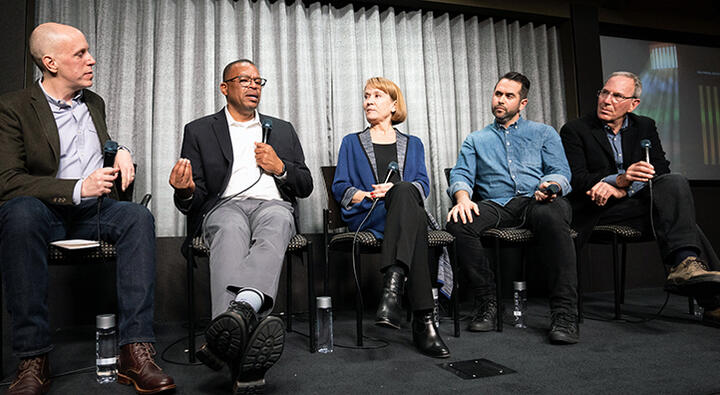 What threw the topic of over-incarceration in the U.S. into sharp relief wasn't so much the bleak laundry list of statistics that underscored the fact that we lock up more people than the rest of the world—and for longer periods of time. Instead, it was a simple question directed at the audience just prior to the start of the panel discussion "Beyond Bars: Changing the Narrative on Criminal Justice."

"How many of you in this room know someone, someone close to you, who has been in jail or prison?" asked Kate Folb, director of Hollywood, Health & Society (HH&S).

Nearly half of the audience members raised their hands.

World Prison Brief reports that the U.S. has the highest incarceration rate out of more than 200 nations listed, and to earn that notorious distinction we manage to imprison more of our citizens than countries with much larger populations (India, China) and those with totalitarian governments (Russia).

Speakers at the Feb. 26 event, held at the SAG-AFTRA Foundation screening room, were Zach Calig, writer for the ABC legal drama For Life; Dan Birman, an award-winning documentary producer who's working on a Netflix film that explores juvenile justice issues centering on the case of Cyntoia Brown; Lovisa Stannow, executive director of Just Detention International; and Aly Tamboura, manager in the criminal justice reform program at the Chan Zuckerberg Initiative, which is a funding partner of HH&S. Screenwriter John August (Aladdin, Big Fish), co-host of the podcast Scriptnotes, served as the evening's moderator.

Stannow brought a global perspective to the discussion. Her work for Just Detention entails visiting detention facilities in the U.S, South Africa, Mexico and the Philippines.

There are prisons in the world that are a lot worse than U.S. penitentiaries, Stannow said. She has visited grim facilities where incarcerated people must sleep on cold floors because there are no beds. Others lack food services, leaving it up to families on the outside to provide meals. On the other hand, some prisons in Canada and northern Europe are "relatively healthy institutions " that focus on helping people heal, and are committed to making sure that people who are released don’t come back.

The U.S., Stannow said, falls somewhere in the middle. "But we should not think that we’re doing well here," she added. "That’s just not the case."

“We keep people in prison for such a long time,” Stannow said. “People spend decades inside—they lose touch with their families, they are dehumanized at every turn."

In addition, U.S. prisons are suffering from an epidemic of rape and sexual abuse. Every single year in U.S. detention, Stannow said, 200,000 people are sexually abused, and most of these people are assaulted more than once.

"We should be ashamed and alarmed about our prisons," she said.

To underline her point, consider what happened in January 2020 at some of the state prisons in Mississippi, where five inmates died and two others escaped during a wave of gang warfare and riots. At the penitentiary in Parchman, there were reports of violence, health violations, rats, inadequate food and medical care, fires and "blood-smeared walls." The Sentencing Project lists Mississippi has having the third-highest incarceration rate in the U.S. (Louisiana and Oklahoma are first and second.)

Tamboura has first-hand knowledge of the dehumanizing process that people undergo in prison—he spent 12 years behind bars after being sentenced for threatening his now ex-wife. Most of that time was served at San Quentin State Prison, just north of San Francisco.

"When I was sent to prison I was terrified, because everything that I knew about prison and jail I learned from television or the media," Tamboura said, but he added that the worn-out depiction of a new prisoner being escorted to his cell as catcalls ring out from other inmates isn't true.

No, the reality is plenty unsettling all by itself, without the drama.

"When you get to prison, then you really start to get stripped of your identity," he said. "You get a prison number and that becomes who you are. They take your clothing from you. You can no longer do the normal things that you did in life, like cook for yourself or wash your clothes or decide when you want to take a shower. You lose your individuality and your purpose.

"Your purpose [from] the day you arrive is survival," Tamboura said.

Popular entertainment, as Tamboura indicated, has frequently gone behind prison walls for its storytelling—with shows that include Oz, Prison Break and Orange Is the New Black, and movies such as The Shawshank Redemption, The Green Mile and last year's Clemency. Although Stannow said Hollywood isn't obligated to fix the broken criminal justice system, it still has a role to play.

"I think people who work in film and television have a really important choice to make," she said. "You can hang on to stereotypes and tropes, or you can do just a tiny bit of extra work and actually get it right."

The new series For Life is loosely based on the true story of Isaac Wright Jr., who in 1991 was wrongfully convicted of cocaine trafficking and sentenced to life in prison in New Jersey. While incarcerated, he became a paralegal and helped overturn wrongful convictions for many of his fellow inmates. Wright had been working on reversing his own conviction for years when events outside prison helped put the spotlight back on his case. A subsequent investigation of prosecution misconduct after Wright's arrest and during his trial prompted a judge to order a new trial, and after making bail Wright was freed for the first time in more than seven years. A plan to try him again was postponed "indefinitely" and charges were eventually dropped.

Through Wright's story, Calig and the rest of the show's creative team—the creator/showrunner is Hank Steinberg, and Curtis "50 Cent" Jackson is an executive producer—set out to pull back the curtain on the criminal justice system, and the prosecutorial process in particular.

"There's more than meets the eye," Calig said. "It's not black and white."

Indeed, Calig talked about the show's ability to give shading to all the characters, avoiding depictions of full-on heroes or villains. One of the opportunities that the writers have, he said, is "humanizing" everyone on the show by giving characters a full back-story—including their relationships, families and personal problems.

"We're hoping to convey that people that are locked up behind bars are humans, and have stories, and have families and loved ones, and deserve to be treated humanely," he said. 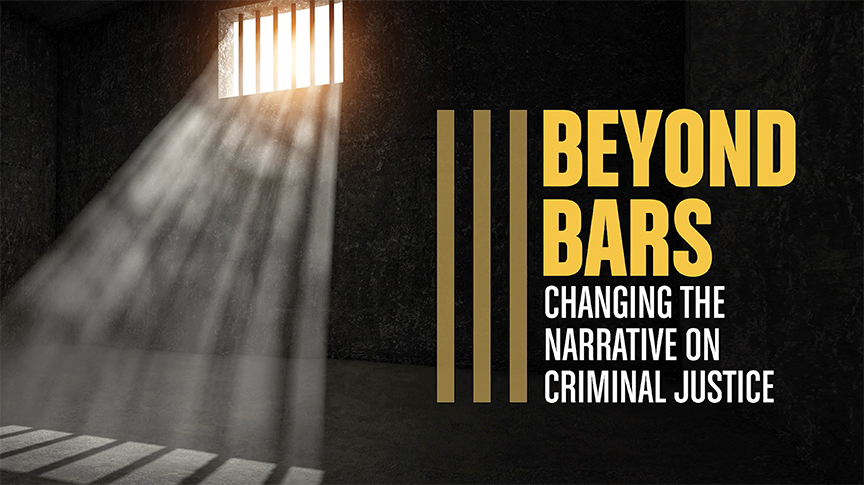 Both Calig and Tamboura touched upon how prosecutors (and law enforcement officers) have the ability to control the narrative after someone is arrested. In court, police reports about a crime are treated as gospel, said Tamboura, who added that Hollywood portrayals are wildly off the mark when it comes to depicting what happens in a courtroom.

"The idea that you have any control—you hire an attorney or one’s appointed for you," Tamboura said. "You become a case number, and a spectator. Very rarely does anyone get up and testify in their [own] defense."

"In America," he said, "if a prosecutor charges you with a felony, you have a 97% chance of being found guilty whether you're innocent of the crime or not."

The inability of those without financial resources to hire a good lawyer, or to even make bail, are indicative of a criminal justice system that is stacked against them. In their book Tightrope: Americans Reaching for Hope, journalists Nicholas Kristof and Sheryl WuDunn quote from a 2018 United Nations report by Philip Alston on how a two-tiered criminal justice system in the U.S. punishes the poor:

Punishing and imprisoning the poor is the distinctively American response to poverty in the twenty-first century. Workers who cannot pay their debts, those who cannot afford private probation services, minorities targeted for traffic infractions, the homeless, the mentally ill, fathers who cannot pay child support and many others are all locked up. Mass incarceration is used to make social problems temporarily invisible and to create the mirage of something having been done.

It is difficult to imagine a more self-defeating strategy. Federal, state, county and city governments incur vast costs in running jails and prisons. Sometimes these costs are "recovered" from the prisoners, thus fuelling the latter's cycle of poverty and desperation. The criminal records attached to the poor through imprisonment make it even harder for them to find jobs, housing, stability and self-sufficiency. Families are destroyed, children are left parentless and the burden on governments mounts.

Before finding out about Cyntoia Brown and her story in 2004, Birman acknowledged that he knew little about the criminal justice system, and said writers and filmmakers often fall short when it comes to filling in all the little pieces about those whose lives are caught up in the system. He should know; getting the full story meant for him spending the last 16 years following the case of Brown, who was arrested when she was a teenager for killing a man who picked her up for sex. Despite her claims that it was in self-defense, Brown was convicted of murder and sentenced to life in prison.

After serving 15 years Brown was granted clemency by the governor of Tennessee. Her case had become a cause célèbre—she had been a teenage runaway who had been physically abused and forced into prostitution—and Birman noted that “the world she grew up in had a lot to do in shaping her.”

Birman’s initial goal back in 2004 was to understand how juveniles become violent, which led him to gaining access to the juvenile justice system and the public defenders office in Nashville, where he heard about Brown. "Our initial assessment centered on the crime," he said, "but what I found over time is it ain’t that simple."

“The system is not intended to understand the circumstances of how someone [ends] up in prison,” Birman told the audience. “We bothered to take a hard, hard look at the humanity.”

Karen Struck, a writer on For Life, couldn’t attend but watched the entire panel via livestream and said afterward: “It was really phenomenal. The guests provided so much insight and brought a sense of humanity to a subject that usually gets the opposite.”

The Beyond Bars panel was taped for an episode of August's podcast.