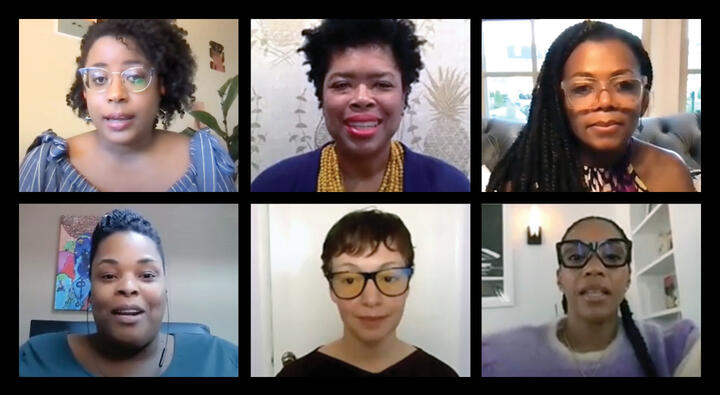 Our May 6 panel "The Black Birth Experience: Challenges, Joys and Justice" brought experts and TV writers together over the topic of why Black women are more likely to die from pregnancy or childbirth than women in any other race group.

This heightened risk of pregnancy-related death spans income and education levels (think Serena Williams or Beyonce), and the discussion explored the causes of these maternal health discrepancies, along with how TV depictions of the issue can help.

Compared to non-Hispanic white persons, Black birthing people are 92% more likely to be at risk for severe maternal morbidity such as hemorrhage and infection.

The panelists included: Erika Green Swafford, a consulting producer and writer with the NBC series New Amsterdam (NBC); Helen Krieger, a writer for grown-ish (Freeform), #blackAF (Netflix) and mixed-ish (ABC); Esa Lewis, a writer and producer on black-ish (ABC); Dr. Joia Crear-Perry, an obstetrician and gynecologist in New Orleans, and the founder and president of the National Birth Equity Collaborative; Kay Matthews, founder of the Shades of Blue Project, which supports women before, during and after childbirth with community resources, mental health advocacy, treatment and support; and Priska Neely, the managing editor for the Gulf States Newsroom, a collaboration between NPR and member stations in Alabama, Louisiana and Mississippi, who served as the discussion moderator.