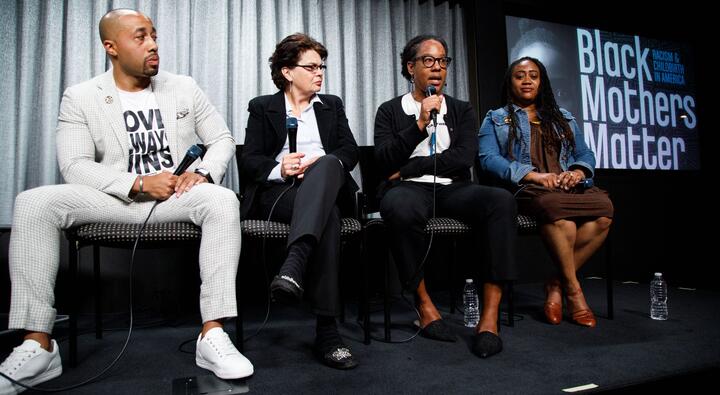 In a scene at the end of a wrenching episode of the FOX medical show "The Resident," whose storyline focuses on the death of a Black woman after she gives birth, the chief of surgery of the fictional Chastain Park Memorial Hospital tells the grief-stricken husband: “Your wife suffered what we refer to as a ‘never’ event—something that should never have happened.”

In the U.S., it happens far too often.

“Tonight [covers] a grim topic but a very important topic," said HH&S Director Kate Folb. "But I'm thankful to know that it’s getting some attention lately.”

Johnson's wife, Kira, died in 2016 from internal bleeding following a routine, planned C-section at Cedars-Sinai Medical Center in Los Angeles. Their story was the inspiration for the episode of The Resident (“If Not Now, When?”) that aired in April. 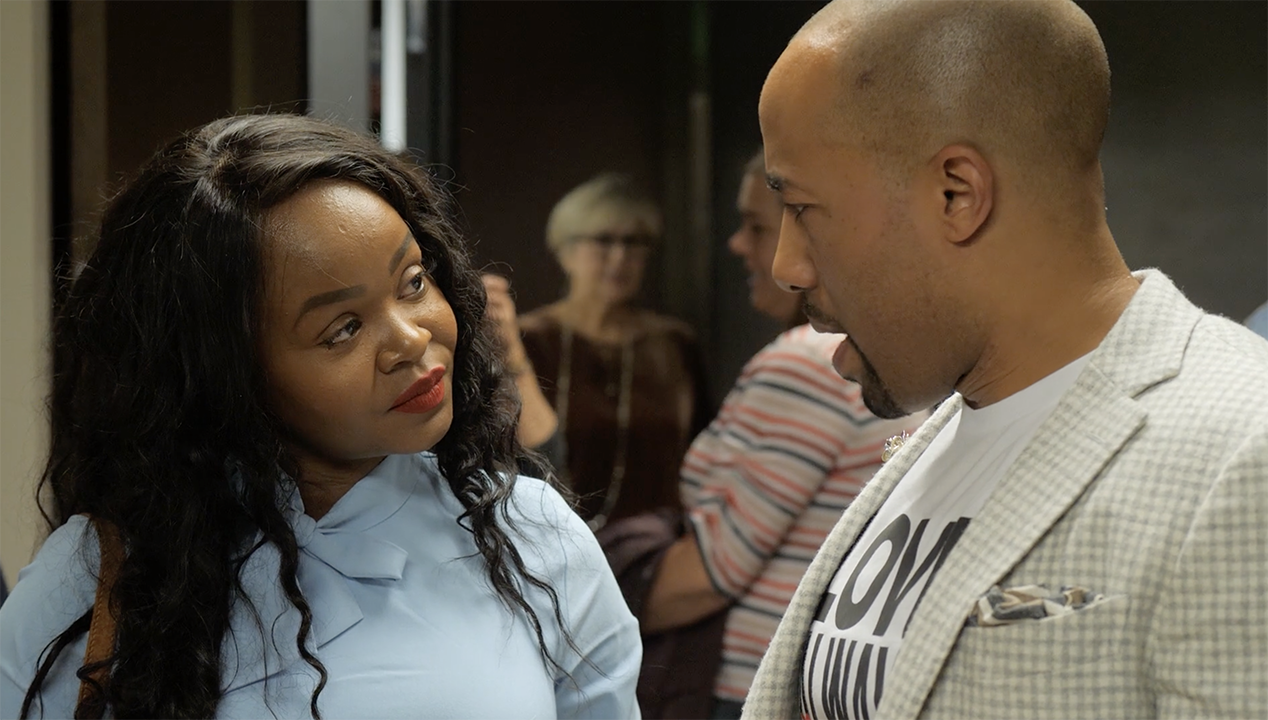 The storyline depicts a series of systemic failures, compounded by bias on the part of some of the fictional hospital's staff, that led to a negligent delay in critical care. In the episode, both the husband (portrayed by Kamal Bolden) and the eponymous resident (Dr. Devon Pravesh, played by Manish Dayal) repeatedly ask and plead that emergency steps, including a CT scan, be taken to save the life of the wife (played by Vanissa Antoine) as her condition steadily worsens. When she's finally taken into surgery, hours after her husband first notices blood in her catheter—from a torn bladder—it's too late.

Jones said bringing Kira's story to life wasn't easy. Initially, two writers with the show, Chris Bessounian and Tianna Majumdar-Langham, brought the story idea to her and played a clip of Charles Johnson testifying in Congress.

"We were instantly moved beyond words," Jones said.

There was some pushback from the network.

"[At first] they didn't want anyone to be at fault in the story," Jones said. "They wanted it to be a systemic error."

That approach drew criticism from the show's creative team—including a director who was attached to the project in the beginning—because it failed to address the issue of racism. Subsequent drafts inched the story forward to that end, until they finally got the green light. At some point executives wanted to hedge a bit, asking that the couple be white (the obstetrician on the show who botched the C-section was white).

Jones told them no.

Kira Johnson is just one among the many names on a roll call that symbolizes, as the Harvard School of Public Health calls it, a “public health crisis that’s been hiding in plain sight for the last 30 years.”

The CDC reports that 700 women die each year after giving birth (pregnancy-related deaths are reported up to a year postpartum). That number is disproportionately borne by Black women, and McLemore said the figure is too low.

"The CDC has not released new statistics on maternal morbidity and mortality since 2007 for a variety of reasons, including the funding of the federal government for health services research," she said.

McLemore also said an estimated 50,000 cases each year are "near misses" in which emergency medical procedures such as blood transfusions or hysterectomies are taken to save a mother's life.

In emphasizing the factors of race and racism in the bleak outcomes of Black maternal births, both McLemore and Scott put the lie to the belief that the statistics somehow reflect the fact that Black women are "biologically inferior."

It's the "older, sicker and fatter" trope, Scott said. She called it "mother blame."

"We have the tools, the technology and training to do something about this," Scott said. "What we lack is the ability to see Black births and Black women as valuable."

McLemore said the reasons often given for the sorry state of Black maternal health in the United States—pre-existing conditions like heart disease or untreated hypertension, and hemorrhaging—are coupled with individual and structural racism.

"What we don't hear [as often] is that 60% of these deaths are preventable," she said.

"The exact same trends (obesity, diabetes, older moms) in other high-income countries don’t result in the same proportion of maternal deaths as we have in the United States," McLemore said. "There are other things going on that really contribute to these deaths."

And in California, Scott said, Black women who have a level of affluence, are married and have higher education still have worse outcomes than single white teen-agers with less than a high school education. Scott added that the state has reduced maternal deaths (by 55% between 2006 and 2013) through the California Maternal Quality Care Collaborative, but for African Americans that’s not the case.

"Black women are dying at the same rate as in 1999," she said. "Blacks make up just 4% of the state's population but still lead in maternal deaths."

In a recent article from NPR, "Why Racial Gaps in Maternal Mortality Persist," Rear Admiral Wanda Barfield, director of the Division of Reproductive Health for the CDC, is quoted as saying: ”Minority women are delivering in different and lower-quality hospitals than white women,” which could clearly affect outcomes.

Other causes weigh in. The same NPR article reports that the “evidence is strong that it is the chronic effect of the stress of racism ... that takes its toll on pregnancy, childbirth and care for a newborn after birth."

Casting a wider net, the Center for American Progress in 2018 cited social factors such as housing instability, food insecurity and neighborhood safety as all contributing to why Black mothers keep dying.

Charles Johnson now lives in Atlanta. When he looks back to the tragic events that led to his wife's death, he's haunted by the feeling that he should have done more that day—raised his voice, slammed a fist on a counter at the nurse's station, grabbed a doctor by the collar—anything to get attention drawn to Kira's plight. But he said he didn't want to be seen as the "angry Black man."

"An African American man who raises his voice is seen as a threat," he said.

And what if that behavior had resulted in him being removed from the hospital? Who would have been there to advocate for his wife's care?

"I didn’t feel like I had the ability to fight for her like I felt that I should have," he said.

Scott said that unlike other ethnic and racial groups, pregnant Black women and their families for the most part lack power and autonomy the minute they walk into the hospital, where the staff might be more concerned about their own safety—and the system's. So what should be a time for Black families to celebrate the sense of resiliency and joy surrounding birth becomes diminished.

It's telling that Kira's death occurred even in a major cosmopolitan city like Los Angeles, at one of the top-rated hospitals in the country. The Johnsons had only been living here a few months when Kira died. In his home state of Georgia, Johnson said, there's no obstetric care available in the majority of the state's 159 counties, a direct result of funding cuts in women's health care across the board. That often means long drives to see a specialist. McLemore said the larger national picture is equally grim—90% of counties in the U.S. do not have obstetrical care.

"Maternal-child health, the health of birthing people—these are barometers that the World Health Organization and the UN use to [measure] the well-being of your country," McLemore said. "If we can’t take care of the healthiest people in the hospital—and generally moms and babies are that—something’s wrong."

Yet Johnson, who's working to change the system through his 4Kira4Moms Foundation, holds out hope that people "are waking up to the fact that mothers and babies are in crisis in the U.S."

"There’s so many constituencies in this country, but the people who care about mothers and babies are the largest constituency there is," he said. "There's two types of people: either you're a momma, or you got one."