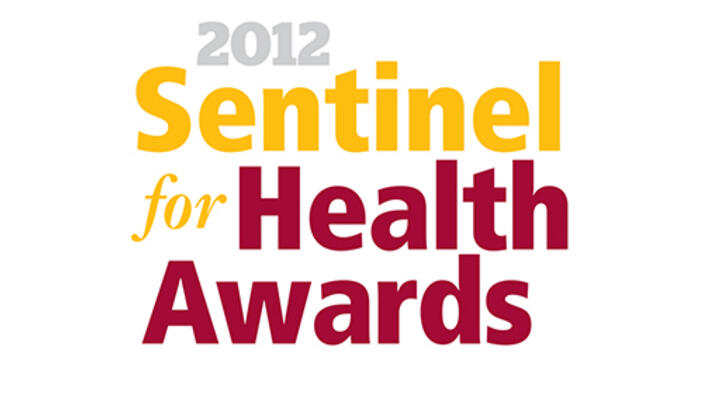 Hollywood, Health & Society (HH&S), a program of the USC Annenberg School's Norman Lear Center, announces a call for entries for the 13th annual Sentinel for Health Awards. The deadline for all entries is June 15, 2012.

The 2012 winners will be selected through two rounds of judging. Health topic experts from CDC and other partner organizations will review entries for accuracy of health issues. Judges from entertainment and public health organizations will review finalists in each category for entertainment value and benefit to the viewing audience to determine the winners. Information for award applicants can be found here.

"TV writers and producers not only entertain audiences, but they affect them as well," said Martin Kaplan, director of the Norman Lear Center. "We know this both from our research, and from stories that viewers tell. This award recognizes the responsible and creative use of that power by television writers and producers."

Sandra de Castro Buffington, director of Hollywood, Health & Society, adds that writers want their storylines to be realistic and accurate. "Writers contact HH&S to access highly credible experts, quickly and free of charge, to ensure a storyline is on track. We work with dozens of shows and respond to hundreds of requests by writers each year on topics such as birth defects, malaria, tuberculosis, drug abuse, youth violence and organ donation."

Last year, the NBC drama Parenthood received first place in the primetime drama category for accurately portraying the challenges involved in raising a child who has Asperger’s syndrome. An episode of ABC’s Grey’s Anatomy earned first place for a primetime minor storyline about cystic fibrosis, and the Telemundo TV series El Clon won first place in the telenovela category for a storyline about the importance of Pap smears to prevent cervical cancer. In the children’s programming category, PBS’s Sesame Street took top honors for a storyline about healthy eating on a budget. ABC’s Off the Map was named the winner in the global health category for excellence in storytelling on the topics of cultural competency regarding childbirth in the Quechua culture, mining health hazards, and the exploitation of hope among terminally ill people.

Funded by CDC, The California Endowment, the Bill & Melinda Gates Foundation, the Barr Foundation, The Grantham Foundation and the Skoll Global Threats Fund, Hollywood, Health & Society provides entertainment industry professionals with accurate and timely information for health storylines, including online materials, and consultations and briefings with experts. Based at the USC Annenberg School's Norman Lear Center, HH&S is a one-stop shop for writers, producers and others in search of credible information on a wide range of public health topics. For more information about resources for writers, go to www.usc.edu/hhs.

The Norman Lear Center is a multidisciplinary research and public policy center studying and shaping the impact of entertainment and media on society. From its base in the Annenberg School for Communication & Journalism, the Lear Center builds bridges between faculty who study aspects of entertainment, media and culture. Beyond campus, it bridges the gap between entertainment industry and academia, and between them and the public. For more information, visit www.learcenter.org.

Located in Los Angeles at the University of Southern California, the USC Annenberg School for Communication & Journalism is among the nation's leading institutions devoted to the study of journalism and communication, and their impact on politics, culture and society. With an enrollment of more than 1,900 graduate and undergraduate students, USC Annenberg offers bachelor's, master's and doctoral degrees in journalism, communication, public diplomacy and public relations. For more information, visit www.annenberg.usc.edu.

Click on the links below to download the 2012 Sentinel Awards entry form, fact sheet or press release.