Clinical Trials So White: When Life-Saving Research Leaves People of Color Behind 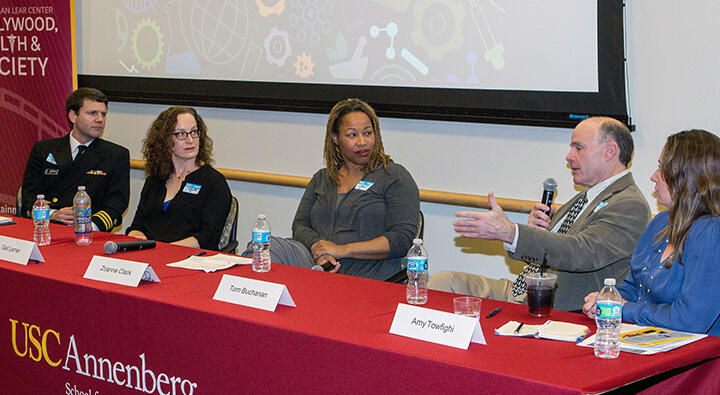 Panelists discussed the lack of minority participation in clinical research trials, and the power of entertainment messaging to help address critical health topics.

The discussion also spotlighted how the low percentage of minority participation in research trials—especially African Americans and Hispanics—hampers discoveries of new treatments and impedes efforts to determine how treatments affect underrepresented populations.

The event, held March 2 at Children's Hospital Los Angeles (CHLA), featured guest speakers Michele Kipke, co-director of the Southern California Clinical and Translational Science Institute (SC CTSI) and a professor of pediatrics and preventative medicine at the Keck School of Medicine of USC; Dr. Thomas Buchanan, director of SC CTSI and head of one of the leading groups conducting research into diabetes among Hispanic Americans; Dr. Amy Towfighi, director of neurological services and innovation for the Los Angeles County Department of Health Services; Fleetwood Loustalot, the lead for the Epidemiology, Surveillance and Health Services Team in the Division for Heart Disease and Stroke Prevention (DHDSP) at the Centers for Disease Control and Prevention; Dr. Zoanne Clack, executive producer on the ABC medical drama Grey’s Anatomy; and Gail Lerner, co-executive producer and writer for the ABC comedy series black-ish. Dr. Clack served as the moderator.

"The ways that we promote wellness, prevent disease and treat disease all come from research," said Marty Kaplan, the founder of Hollywood, Health & Society and director of the USC Annenberg Norman Lear Center, in opening remarks to the panel and audience. "The odd accident makes for a great story, but it’s really about people working hard to find out what works."

Clinical trials study the effectiveness and safety of medications and treatments used to deal with different illnesses and injuries, and Kipke said the process—from idea to regulatory approval—can take 20 years. Racial/ethnic minorities account for 30% of the U.S. population but only comprise 17% of research participants, explained Kipke, who serves as the vice chair of research within CHLA. Some of the obstacles include mistrust of the medical establishment, fear of being deported, language barriers and lack of access to information.

Grey's Anatomy, now in its 13th season, featured a multi-episode storyline dealing with a critically ill patient with Type 1 diabetes who participates in a clinical study at Seattle Grace Mercy West Hospital (In the storyline, surgeons transplant her insulin-producing islet cells into a device, then implant the device in her body to take over the function of her pancreas.)

Following a clip of the show, Clack explained that in researching the story, the creative staff of Grey’s Anatomy reached out to Hollywood Health & Society to get in touch with an expert in islet cell transplantation, telling the audience that the show’s writers and producers had extensive, detailed conversations with the expert for accurate information in getting the story right.

Clack noted that her show featured another clinical trial storyline—this one on Alzheimer’s.

“We’ve done a few [clinical research storylines], and we have much more than 17% minorities represented,” Clack said, acknowledging that the show does take some dramatic license. “It’s not exactly reality, but better.”

In many ways, the ABC hit comedy black-ish seems to be the perfect vehicle for offering up a window on the experiences of the black community. In another TV clip that was shown during the panel, titled "Dr. Hell No," Laurence Fishburne’s character, Pops, refuses to have an angioplasty to clear a blocked heart artery, preferring to get a "second opinion" from friends at his neighborhood barbershop. The shop's armchair doctors tell Pops he's fine, and that with a little cranberry juice, liniment and some nasal decongestant he'll be right as rain. It's comedic gold, and Lerner raised a deeper, underlying reason—connecting Pops' mistrust (and that of the African-American culture as a whole) with the infamous 40-year Tuskegee clinical study, in which black men with syphilis, serving as a control group, were intentionally left untreated for the disease.

In a June 2016 article (“A Generation of Bad Blood”), reporter Vann R. Newark II writes in The Atlantic magazine: "The Tuskegee Study is perhaps the most enduring wound in American health science … [in which] Public Health Service officials followed 600 rural black men in Alabama with syphilis over the course of their lives, refusing to tell patients their diagnosis, refusing to treat them for the debilitating disease, and actively denying some of them treatment.

"Research has long suggested that the ill effects of the Tuskegee Study extend beyond those men and their families to the greater whole of black culture. Black patients consistently express less trust in their physicians and the medical system than white patients, are more likely to believe medical conspiracies, and are much less likely to have common, positive experiences in health-care settings."

In preparing and thinking through the storyline, Lerner said the show’s creator, Kenya Barris, and staff discussed the realities of the Tuskegee experiments as actively being a part of Pops’ memory, his life and experience. Add to that, Lerner said, the fact that American hospitals weren’t integrated until the mid-1960s, and you would have cause for concern in seeking out medical help.

"Pops grew up with either no health care or very poor health care," Lerner said.

In a recent article in The New York Times about the lack of diversity in clinical cancer trials, researchers said that “minority patients with cancer are more likely to have other, poorly controlled chronic diseases like diabetes that may make them ineligible for studies.” ◼︎