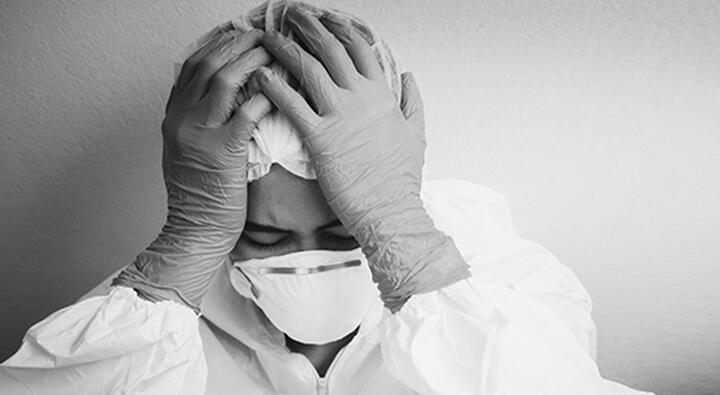 Among the takeaways that emerged from the webinar discussion about the physical and mental toll on healthcare workers was the fact that the pandemic didn't necessarily cause the crisis, but it did stoke fuel on an already burning fire.

“Going in to the pandemic, there was already a high degree of depression and suicide among healthcare workers,” Feist said.

A March-April 2021 survey of more than 26,000 public health workers in the U.S. reported that over half (53%) experienced mental health issues during the pandemic. The CDC said these included depression, anxiety, PTSD and suicidal ideation.

Feist spoke sorrowfully from first-hand experience. His sister-in-law, Dr. Lorna Breen, 49, was director of the emergency department at New York-Presbyterian Allen Hospital. Many of the residents who live in the surrounding Northern Manhattan community are poor. When the pandemic hit, The New York Times reported, Dr. Breen’s unit “became a brutal battleground.” Personal protective equipment and other supplies were scarce, sick people crowded into an already overflowing waiting room, and patients in beds lined the hallways. Many would end up dying from a terrifying and unknown pathogen.

In March 2020, Dr. Breen herself had fallen seriously ill from the virus, toughing it out in quarantine at home, and even managing to help keep her ER running through phone calls with staff. She returned to work exhausted and suffering from brain fog, unable to carry out her duties as the pandemic intensified.

It was chaos, a scene repeated in overwhelmed hospital wards—rural and big-city—across the country, where doctors, nurses and other members of caregiving staff often became sick and died. Others suffered from the continuous stress. They toiled under excruciating conditions—long past the point of burnout. Many of their too numerous patients were alive one minute, and dead the next.

In early April, a stricken Dr. Breen called her younger sister, Jennifer, in Virginia, who drove north to a rendezvous point near Baltimore and collected Lorna from the car of friends who had ferried her out of New York City. The two sisters headed south to the University of Virginia Medical Center, where Dr. Breen checked in to the hospital’s psychiatric unit.

Even in the medical community, the stigma surrounding those who seek help for their mental health persists.

“In many states, doctors and nurses getting mental health help can compromise their careers,” Feist said, jeopardizing their medical licenses and the ability to secure malpractice insurance. Or they avoid getting help for fear of losing job opportunities or the respect of colleagues, reports the Association of American Medical Colleges. A 2020 survey by The Physicians Foundation found that nearly 60% of doctors reported experiencing burnout, yet only 13% of providers sought treatment.

Dr. Breen told her family that her career would never recover. The Times article reported that she despaired over her absence from a situation that was “desperate for heroes.” After spending nearly two weeks as a patient on the psychiatric ward, she went to stay with her mother in Charlottesville. On April 26, Dr. Breen took her own life.

“I’ve had my fair share of mental health breakdowns on the hospital floor,” Dougé said. “Working in a large city, there was always the reality of not enough hospital staff to deal with patients, but when the pandemic hit, that ramped up.” The majority of her patients were Black, Hispanic or immigrants.

In the early days of the outbreak, Dougé said, the hospital staff at Long Island Jewish Medical Center (LIJ) seemingly had the ability to power through, but that capacity quickly vanished. New York City was ground zero once again. She described a hospital where even the lobby was being used as a triage site. Not far away, mass graves for Covid-19 victims were being excavated.

The First Wave depicts the difficult first four months of the pandemic at LIJ. In one scene, Dougé is seen scrubbing her hands during her shift and says, her tone faltering: “This has been a long-ass day. It’s just—you hear it in their voice but you have no sense of reassurance for these people. I can’t give that to them."

She begins to cry, and then her words pour out in a quickening cascade of grief.

“Every moment is like, you don’t know. You thought they were fine. You're always on edge, you can never breathe a sigh of relief."

During the panel, Dougé said there was a surreal quality to working on the wards—a patient with Covid-19 would die in one room, while next door someone also sick with the virus was well enough to complain about the hospital’s food. In the documentary, Dougé is heard saying that doctors are trained to recognize patterns in a patient's illness, and decide on courses of treatment. With Covid-19, however, the virus' effect on the body was unpredictable.

Making matters much worse, healthcare workers came to realize that they faced a new foe.

“Misinformation has been incredibly challenging,” Boucher said. “Covid denial has become surprisingly more prevalent as the pandemic continues,” complicating their work in caring for the sick.

Boucher was featured in a Washington Post article from July 2021, which reported that to many in her Appalachian Highlands community, she was just another part of a giant hoax. "The post-traumatic stress experienced by nurses and doctors during the pandemic has been compared to what soldiers suffer," The Post article said. "But in places still rife with covid denial ...  [it] is like having fought in a war that many believe never took place."

Boucher told the webinar audience that she’s had relatives of patients ill with Covid-19 accuse her and the hospital of making money off a made-up disease, even as their loved ones struggled to stay alive on ventilators.

In the land of television, the entire third season of New Amsterdam was devoted to Covid-19 storylines, and Schulner, the executive producer, said that the ratings went down.

“All the doctors on the show wore masks, all the time,” Schulner said, adding that judging by the Twitter-verse, the overarching pandemic storyline might have been a bit too much for viewers who were just more interested in whether “Max and Sharpe were going to hook up,” referring to two of the main physician characters on the show.

Like a lot of TV series that live in the medical world, New Amsterdam in Season 4 moved on and reverted to telling other stories. And then Omicron, the newest mutated variant of the virus, hit.

“Writing and putting together a show about [this time] is incredibly complex,” Schulner pointed out. “There’s no way for Hollywood to address the nuances, the unknowingness and the speed of this virus. And actors’ faces need to be seen.”

He said the show is currently working on an episode about violence against hospital workers.

Schulner said that he’s often filled with rage over current events as far as the pandemic goes, but tries to channel his anger in constructive ways every morning when he walks in to the writers room. “We’re an optimistic show and we try to show what healthcare should be,” he said. “We bring different sides to an issue.”

The panel underscored “the business of medicine,” in which many corporate hospital executives are devoted more to the bottom line and less to the well-being of their workers. Patients and their providers are often treated as pieces in the consumer landscape, with surveys asking patients how they would rate the care they received. Doctors and nurses feel abandoned by many of the agencies that are supposed to be looking out for them. On hearing all of this, Schulner lamented the state of the medical system in the U.S., saying that for-profit healthcare shouldn't have a place in society.

Bellevue [the public hospital in New York on which the fictional New Amsterdam is based] was established in 1736, Schulner said. “That was before the Constitution. Even then the [founders] knew that you needed a place that would treat people for free.”

Feist and his wife, Jennifer, created the Dr. Lorna Breen Heroes’ Foundation in the summer of 2020 to “reduce burnout of health care professionals and safeguard their well-being.”

“For best patient outcomes,” Feist said, “we need to take a lot better care of those who take care of us.”

The webinar presentation was a collaboration with the CAA Foundation, Full Story Initiative, ALL IN for Healthcare, and the Writers Guild of America.