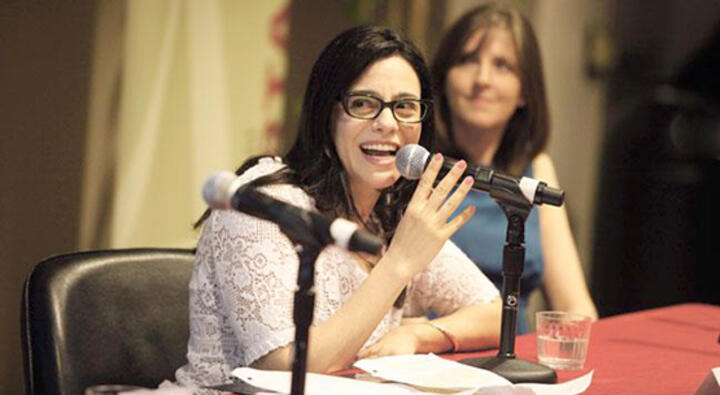 “We’re so pleased to bring together this incredible panel of experts to talk to us about one of the most important health topics of our time,” said HH&S Director Sandra de Castro Buffington in her introductory remarks. The participants included Dr. Lisa Richardson, an oncologist with the Centers for Disease Control and Prevention; Dr. Vijay Trisal, a surgical oncologist and cancer researcher at the City of Hope National Medical Center; Darlene Hunt, the creator and executive producer of Showtime’s The Big C; Jessica Queller, a writer-producer for The CW’s Gossip Girl and author of “Pretty Is What Changes”; and Patti Carr, co-executive producer of 90210, which also airs on The CW.

“Cancer affects people of all ages and all walks of life,” Buffington said. “Who in this room has not been impacted by cancer? Some of us are survivors, others have family members who’ve been affected by the disease, and some of us have witnessed our favorite characters on the screen grappling with cancer.”

Buffington cited the surge in TV cancer storylines—from The Big C to AMC’s Breaking Bad—as vehicles for Hollywood to “inspire and to teach viewers about preventing, treating and overcoming cancer.” And she touched on the role that celebrity cancer survivors like Fran Drescher (The Nanny) have played in founding innovative programs to educate people about the disease. Drescher, who survived uterine cancer, started an organization called the Cancer Schmancer Movement dedicated to publicizing the need for preventive health care.

“Cancer is compelling,” said Dr. Richardson, perhaps because it remains a frightful adversary—a crafty and complex enemy in arguably the last great battle in medicine.

“A dumb cancer cell is smarter than the smartest oncologist,” said Dr. Trisal, referring to its ability to continually adapt to thwart treatments. He added that the stories he encounters of real people with cancer are much more dramatic than the ones on television. Still, he credited TV for keeping patients informed and educated about the disease.

Although Dr. Richardson said new therapies carry the promise of exciting cutting-edge weapons against the disease, the real and important work of preventing cancer through changes in habits and lifestyles is much less glamorous. She cited smoking and obesity as factors in the rise of certain types of cancer. “There is work to be done,” she said. “And we believe that we can achieve [our goals] by working in partnership with Hollywood, Health & Society and writers.”

For HH&S, which has organized previous panel talks on subjects ranging from organ transplants to youth violence, this event took on an intimate and personal tone simply by the fact that there were cancer survivors sitting in the audience,

and by Queller’s own deeply moving story of her decision to have a preventive double mastectomy and, later, her ovaries removed after discovering she was at substantial risk of developing cancer.

At the panel discussion, Queller began by recounting her mother’s battle with breast cancer, which she won, only to be diagnosed with terminal ovarian cancer several years later in 2001. Following her mother’s death in 2003, and at the urging of a close friend, Queller had herself tested for the inherited BRCA gene mutation.The results came back positive, meaning she had up to a 90% chance of developing breast cancer before the age of 50 and a roughly 45% chance of ovarian cancer. Healthy and young, Queller said she thought that any consideration at the time of preemptive surgery to remove her breasts was “insane.”

But in 2004 during her research to write an Op-Ed piece for The New York Times about her experience—an article that was the precursor to her book—Queller said she became an expert on the BRCA mutation and discovered “information that ultimately saved my life.”

At that time, Queller said she was strongly leaning toward having the surgery when an email from the Writers Guild of America caught her eye announcing a panel discussion by Hollywood, Health & Society on BRCA and other prenatal genetic issues. Thinking that the WGA was offering the discussion as a health service on medical issues for its members, Queller sat in the audience and was amazed to discover that it was instead a seminar to educate TV writers on the subject. At the end of the panel discussion, she introduced herself to writer-producer Neal Baer, a board co-chair of HH&S who was moderating the talk.

Queller also talked privately with a genetic oncologist from the National Cancer Institute who sat on the panel that night. After hearing her story, the doctor urged her to have the preemptive surgery. “He was one of the people who pushed me over the edge,” Queller said.

“Having watched my mother die the most horrific death imaginable, I know [having the preventive surgery] was the most sane decision that someone could make,” Queller said, though she added that she was considered “crazy” by many people for the path she took.

Back then, the BRCA gene was still relatively obscure, but that was changing through the efforts of HH&S and, in part, because of Queller’s friends—TV writers for “ER” and “Grey’s Anatomy”—who first channeled her experiences into storylines for their shows.

Now having entered the cultural “zeitgeist,” as Queller put it, the BRCA gene has even made its way onto 90210, a show that Carr, a co-executive producer, acknowledges would probably be the last place one would find such a topic among the usual storylines about wealthy, beautiful people. Yet Carr, a veteran of Private Practice, said the show was looking for something different—something that would generate stories beyond bikinis and the usual fluff. Having settled on a medical issue, the staff of 90210 came to realize that the BRCA gene test was a story that fit the show and its young female audience.

“It was what [the audience] would most care about,” said Carr, in discussing how one character was chosen to test positive for the mutation. She said the repercussions—from the effects on a woman’s love life to the question of having kids—are the kinds of emotional touchstones that do well with their viewers.

In choosing a cancer storyline, Carr said she saw the need to consult with Hollywood, Health & Society in finding medical experts to get the story right. “The reason for accuracy is twofold,” Carr said, and she talked about how so many people have actually lived with the BRCA gene mutation that they recognize what’s true and what’s not, and that you don’t want to “dishonor people’s experience.” And accuracy, Carr said, “gives you much more story ... the information that you get from the research makes your job much easier.”

For Hunt, the creator of The Big C, the path to choosing cancer as the basis for a show was slightly different.

A comedy writer with a style that she described as well on the “dark side,” Hunt had racked up a fair number of credits as a writer and actress before meeting with a producer, who told her that it was time for “a cancer comedy.” A dire situation generating laughter through tears? Hunt said the premise seemed to be tailor-made for her writing talents.

And although she came away from the development meeting feeling energized, Hunt told the audience that she struggled to find a way inside the subject matter. All that changed on a day when Hunt was holding her infant daughter at home, and suddenly realized that she wouldn’t be around forever as a mother to look after her. That sense of mortality, Hunt said, made her look around at first and think: What’s the point to living at all?

But it also led her to realize, in connecting back with the idea for the show, that she could write about a woman (played by Laura Linney) struggling with stage 4 melanoma who discovers that her life is not all she had hoped for and sets out to change it.

“We try to keep cancer in the background,” Hunt said of The Big C. And although the show has made some concessions to new therapies for melanoma that the Linney character will embark upon, Hunt said that the series is really the story of a woman “marching to her death” as she lives her life for the first time.

And as far as Hollywood goes, one couldn’t have written a scene any more powerful than when a woman named Marnie rose from her seat as the discussion drew to a close. She said that, like Queller, she had tested positive for the BRCA gene mutation after the death of her mother from cancer. But after doing research and consulting with surgeons, she chose not to have preventative breast removal at the time. Now she stood here, a cancer survivor with wisps of light hair on her head, and told the audience and panel members that she had a mastectomy.

“You were not crazy,” she told Queller. “I was. And I think what you did was incredibly important.” 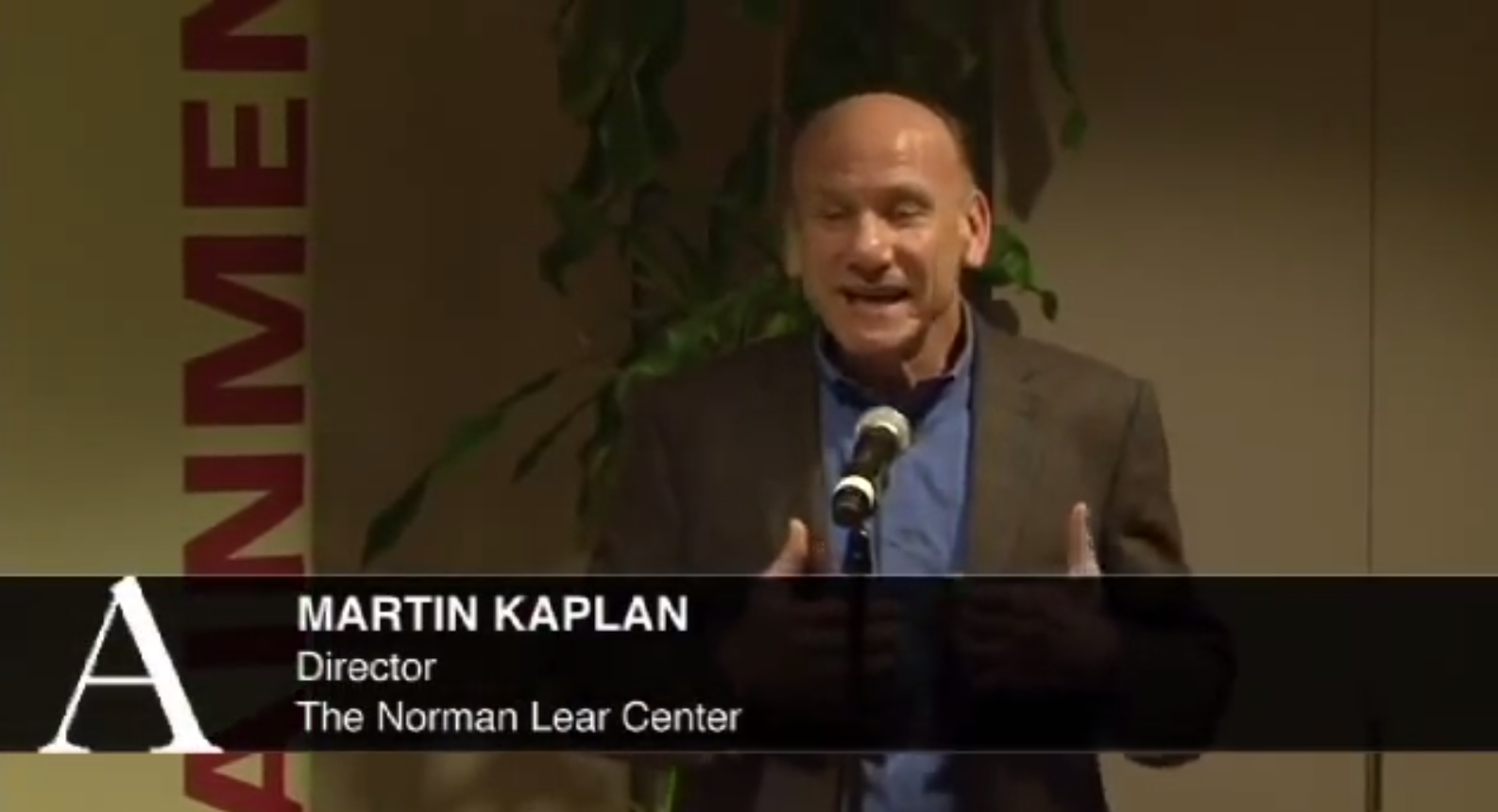