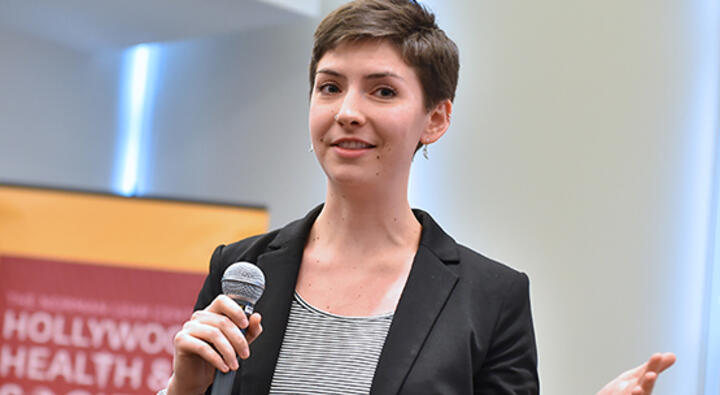 Marybeth Seitz-Brown, an activist and organizer against campus sexual assault, addresses panel and audience during "The Double XX Files." Photos by Dana Maxson

Hollywood, Health & Society’s recent discussion, "The Double XX Files: Health and Justice for Women in Film and TV,” brought the topics of sexual assault, breast cancer and reproductive care into sharp focus with behind-the-scenes looks at the creative process from entertainment writers and producers, personal experiences and some sobering statistics.

“Everyone has a mother or sister or a daughter” whose lives can be deeply affected by any one of these subjects, said moderator Lizz Winstead, a comedy writer and co-creator of The Daily Show who now spearheads Lady Parts Justice, a reproductive rights organization.

Panelists included Beau Willimon, Academy Award-nominated screenwriter (Ides of March), and showrunner and writer for the Netflix series House of Cards; Peter Hedges, director and Academy Award-nominated screenwriter (Pieces of April, About a Boy, What’s Eating Gilbert Grape); Jean Passanante, co-head writer for the CBS daytime drama The Young and the Restless; Temeika Fairley, Ph.D., a senior health scientist with the Centers for Disease Control and Prevention; Dr. Debra Houry, director of the National Center for Injury Prevention and Control, CDC; Dr. Raegan McDonald-Mosley, medical director for Planned Parenthood of Maryland; Desirée Walker, a breast cancer survivor and patient advocate; and Marybeth Seitz-Brown, an activist against campus sexual assault and co-founder of the Fund for a Safer Columbia.

The afternoon event, held April 17 in New York at the Writers Guild of America, East and organized in partnership with the WGAE and CDC, also included opening remarks by Lowell Peterson, executive director of the WGAE; Valerie Borden, communication strategist for the Division of Strategic Communications, Office on Women’s Health, U.S. Department of Health and Human Services; Kate Folb, director of Hollywood, Health & Society; and Marty Kaplan, director of the USC Annenberg Norman Lear Center.

Since 2012, Winstead’s Lady Parts Justice has been a national movement to keep safe, accessible reproductive health care for women. Whether it’s birth control or abortion care, “people can’t control their destinies without it,” she said.

Unlike breast cancer and rape, the topic of abortion has walked a somewhat more delicate line when it comes to storylines in entertainment, especially in the realm of soap operas. Passanante, a veteran writer of daytime dramas, said they’ve been “stuck in time” largely due to the reluctance of advertising sponsors and the shows’ corporate owners to affiliate themselves with such a hot-button subject during early broadcast hours. She said there’s a double message that plays itself out on daytime series: Plenty of romance and sex that’s coupled with a strong moralistic message when it comes to characters dealing with the consequences of jumping in and out of bed all the time.

“They don’t seem to be progressing as much as other forms of entertainment,” she said, calling it a huge mistake for a medium whose shows have dwindled to a handful in number over the years. “Soaps are in peril.”

“I’ve never gotten away with telling a story of any character having an abortion,” Passanante said. She recalled the long narrative arc of one character on As the World Turns, a young girl who gets pregnant, is “slut-shamed” by her schoolmates, decides to get an abortion, struggles with her choice in the face of intense pressure from friends and family—including her mother—to change her mind, only to fall down and have a miscarriage.

Despite ending the storyline with a “ridiculous melodramatic situation,” Passanante said that at least up till then they managed to have a conversation about abortion an hour a day, five days a week, and to have the discussion in a way that was responsible.

At some point in the discussion, breast cancer—and cancer in general—seemed to take on a palpable presence in the room. In their remarks, both Desirée Walker and Peter Hedges came across as two veterans of a battle against a shared adversary.

As far as TV goes, sexual assault continues to be darkly rich material for dramatic conflict. Analyzing the Netflix sitcom Unbreakable Kimmy Schmidt, a show about a rape survivor who’s been freed after being held captive for years in a hidden bunker, The New Yorker critic Emily Nussbaum wrote: “This is rare material for a sitcom. But it’s not unusual for modern television, which has been experiencing an uptick in stories about sexual violence.”

After listing about a dozen shows—everything from Game of Thrones to Switched at Birth—Nussbaum added: “You could call this a copycat phenomenon, but I’d argue that better roles for actresses made it happen—when women’s lives are taken seriously, sexual violence is going to be part of the drama.”

It was a point during the panel underscored by Willimon, the executive producer of the Netflix series House of Cards (another show mentioned by Nussbaum), in which Vice President Frank Underwood’s wife, Claire, publicly reveals during a TV interview in Season 2 that she was raped by a classmate whom she once dated in college. She subsequently had an abortion. Decades later, the former boyfriend, now a newly commissioned general in the U.S. Army, briefly re-enters her life.

Willimon said the genesis for Claire’s storyline began after he saw a documentary on the widespread cases of sexual assault in the military called The Invisible War, which left him “completely shocked.”

He recalled a writers room discussion that took place afterward in which he talked about how the documentary stuck with him. “ ‘Something about this and Claire feels right to me,’ ” he remembered saying. “ ‘If we’re going to explore it, explore it responsibly.’ “

“I think, as storytellers [our role] is to hold up a mirror,” Willimon said. “If you want to portray the country, this is a part of it. We tried to do our best to dramatize the complexity of it because it means something to Claire.” 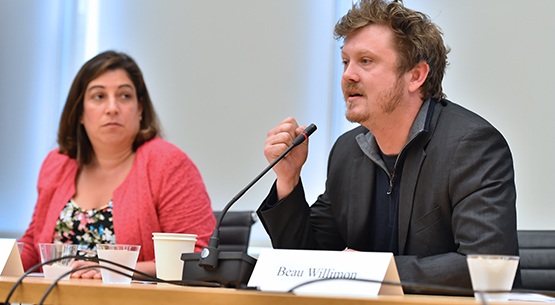 The subjects of campus rape and breast cancer took a personal turn when Marybeth Seitz-Brown and Desiree Walker each rose from their seats to tell their stories to the panel and audience.

Seitz-Brown, an activist and organizer who was herself sexually assaulted twice—once by her boyfriend at the time—asked the writers in attendance to be “consent educators” by offering more positive portrayals in which men and women are empowered to actually have a conversation when it comes to having sex.

“If you think about the number of years that I’ve watched television and just internalized messages about what sex looks like, what rape looks like, it’s probably now 15 to 20 years,” she said. “And I’ve had probably two hours of consent education in my entire life.”

She called the high incidence of campus sexual assaults and the failure to punish offenders a “betrayal by institutions invested in protecting their own image,” which only adds to the trauma suffered by the victims. Dr. Houry said ensuring a safe environment for survivors was critical—many women see their attackers in class and on campus.

"This is about violence," Dr. Houry said.

Walker, a breast cancer survivor who works as a patient advocate, was at first diagnosed at age 38, putting her in the category of “young adult cancer.” The disease returned when she was 47, and she credits her survival to access to quality health care through the company she worked for, which included regular mammograms. But she said she was initially blindsided by her diagnosis because, in part, most of the messages that she saw carried in the media told her that breast cancer a) only affected older women, and b) really wasn’t an issue for African American women overall.

“When you can see someone that is experiencing something and they look like you, then you pay attention,” Walker said. “It’s a whole different experience. And there really wasn’t a lot of talk about breast cancer or any cancer in the African American community. It was taboo . . . a stigma.”

Both Fairley and Dr. McDonald-Mosley emphasized the need for breast cancer screenings in younger women (11% of those diagnosed are under the age of 45), a segment of the population that's been hard to reach.

"When do you start having this conversation with a young woman about breast cancer?" Fairley asked. "What do you say that's not going to cause fear?" Discussing her research, she echoed Walker's comments that young African American women didn't see much of themselves in the messages out there about the need for early screenings.

At some point in the discussion, breast cancer—and cancer in general—seemed to take on a palpable presence in the room. In their remarks, both Walker and Peter Hedges came across as two veterans of a battle against a shared adversary; Walker because she’s a survivor and Hedges because his mother died of metastatic colon cancer. Her illness and struggle propelled him to write and direct Pieces of April, a film about a mother with breast cancer whose time is running out, her estranged relationship with her oldest daughter and one fateful Thanksgiving.

“I couldn’t honor my mom at her funeral,” Hedges said. “I had no words. And I just decided I wanted to make something special as a tribute to her, not about her. The movie was my attempt to articulate my respect for her incredible ferocity and all the ferocity I see with all my friends who have had cancer, and too many who have had breast cancer.

“Look, we all wish cancer didn’t exist. But it’s taught me so much and continues to teach me. As a storyteller, it’s an opportunity. It may be a hard opportunity, but you try to grow from it.” 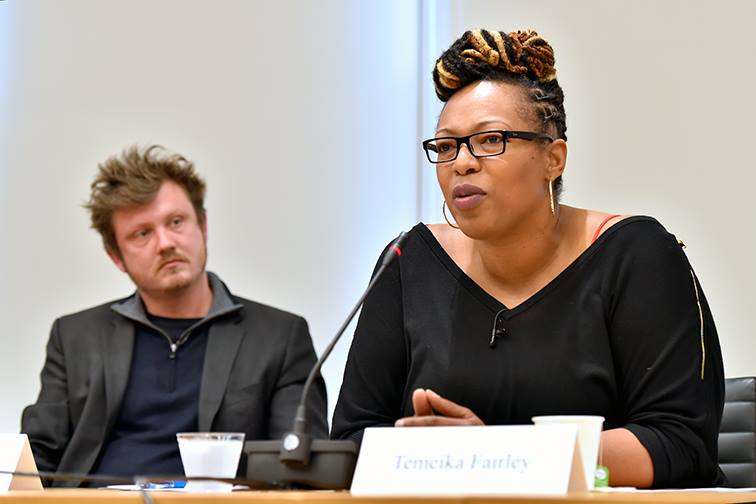