Finding Inspiration on the Streets of L.A. 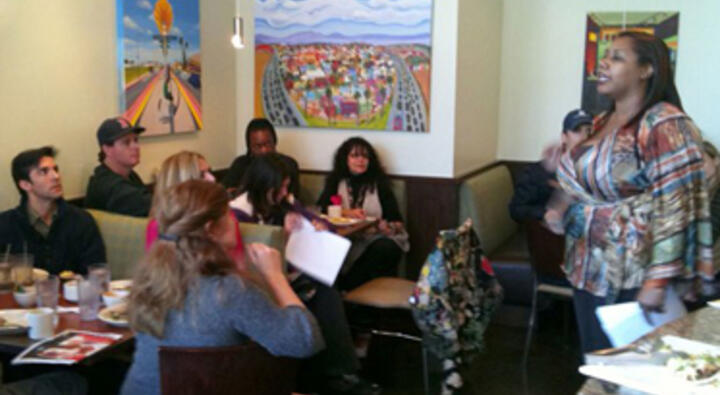 Hollywood, Health & Society launched its Storybus Tours, a signature series of research trips for TV writers to various locations—this time to gather first-hand reports from those working to ease gang violence in the schools and on the streets of Los Angeles.

Created in partnership between HH&S and Neal Baer—director of the USC Institute for Global Health's Center for Storytelling, Activism & Health—the tours provide writers on-the-ground experience in examining health issues. It also gives them the chance to meet and be inspired by stories from local community members and activists who are working for change.

The inaugural trip on Jan. 18, which started in the morning at the Writers Guild of America, West, featured three stops, 15 or so excited participants, a lunchtime full of conversation and, in the end, an education.

Said one writer after the tour: "As you can imagine it has taken us a few days to digest and integrate it all. The powerful things we witnessed and heard continue to reverberate within each of us. A simple ‘thank you’ doesn’t seem to express the gratefulness and appreciation that [we] feel for having had this unique experience."

Kaile Shilling, the director of the Violence Prevention Coalition of Greater Los Angeles, briefed the writers on the bus as it pulled away, sharing her expertise on the cycle of violence and the complex factors involved. It prepared the writers for what followed: a sobering first-hand look at gang violence at a local high school, where the neighborhood is besieged by warring factions. There, students every day face down the threat of violence, negotiating their way through what is essentially a minefield of rival gang affiliations. It’s a place where a wrong article of clothing, a wrong glance, a wrong answer to a question (“Where you from?”), could easily lead to fights and often much worse.

The writers learned that school administrators and faculty work tirelessly to make the campus a safe haven, because in the neighborhood beyond lies an even more heightened sense of menace, where looking over one's shoulder for possible trouble and the constant tug-of-war between police and gangs have almost become a casual occurrence. Short walks home for students—even those not affiliated with any gang—are an exercise in survival.

School administrators and faculty work tirelessly to make the campus a safe haven, because in the neighborhood beyond lies an even more heightened sense of menace, where looking over one's shoulder for possible trouble and the constant tug-of-war between police and gangs have almost become a casual occurrence. Short walks home for students—even those not affiliated with any gang—are an exercise in survival.

And still, the high school as refuge is not infallible. Students gave personal accounts of “jump-ins” (a gang initiation that includes beatings), carrying knives for self-defense, and the fatal shooting of a best friend who had recently graduated.

For a group of “privileged writers,” as one tour participant put it, it was a journey through another world. “The stories were heartbreaking—hopefully we all have become empowered to do something about what we saw and heard."

Leaving the high school, the Storybus tour made its way downtown for lunch at the Homegirl Café, a division of Homeboy Industries. Started by Father Greg Boyle in 1988 as a simple jobs program within Dolores Mission parish, Homeboy Industries has become a national model for successful gang intervention—its motto is Nothing stops a bullet like a job—a place where former gang members “have a second chance at life.” Inside its walls, even ex rival gang members work side-by-side in peace. The Homeboy program offers educational courses, employment services, counseling, legal help and even tattoo removal. Ethan (not his real name), a charismatic 27-year-old and former gang member who shepherded the writers around, is committed to the organization’s successful mission. Homeboy, he told the writers, saved his life.

Today, under Homeboy’s umbrella of businesses, the Homegirl Café thrives as a training ground dedicated to teaching formerly gang-involved young women. During lunch, the writers heard from Dawn L. Brown, executive director of Girls & Gangs, a nonprofit organization in Los Angeles County dedicated to serving girls in gangs and the juvenile justice system. During her talk, Brown described the complexities faced specifically by girls, and dispelled myths about female gang members (Myth number one: Girls in gangs are just as violent as boys; they're not.)

The writers’ day concluded with a panel talk at the California Endowment, which funded the Storybus Tours. Lynn Kaplan, program director for the David Lynch Foundation, described their innovative program that uses transcendental meditation as a technique to reduce violence. Also participating in the discussion was Robert Hernandez, adjunct professor at the USC School of Social Work, who specializes in adolescent gang interventions. He was joined by a former “street youth” who told the assembled writers about the experiences that first led him from promising student to a stint in prison.

After returning to the WGAW, the group all realized the opportunity they had been given to hear some extraordinary stories. For writers working on related storylines, HH&S is providing follow-up consultations with those they met and listened to on the tour.

"This is the kind of research that can take months to accomplish,” said a writer. “You did it on one bus tour and you’ve given me the opportunity to forge incredible relationships with the people working in this world. I will be grateful to you forever."