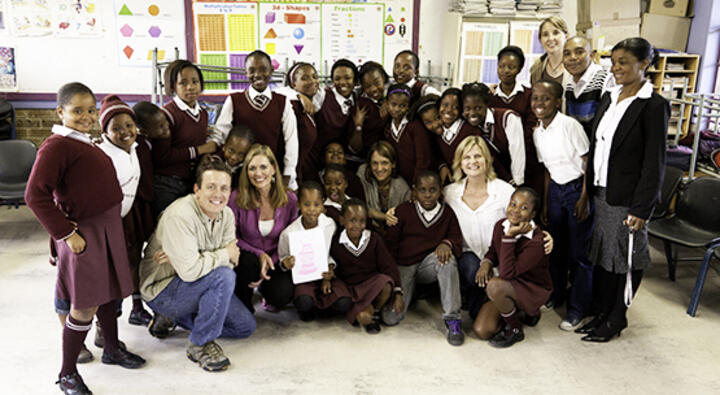 The writers also participated in panel discussions in both Johannesburg and Mumbai with local TV and film writers and others involved in entertainment education in each country. All panelists showcased their work and shared their thoughts on how television can educate viewers, and transform society for the good.

The trip to India again hosted Tenkhoff and Burnett, who were joined by Jennifer Cecil, co-executive producer, Private Practice; Michael Nash, writer/director/executive producer, Climate Refugees; and Zoanne Clack, co-executive producer, Grey’s Anatomy. While in Mumbai, the writers visited the Society of Nutrition, Education and Health Action, which combats malnutrition in the slum of Dharavi. They met with the Humsafar Trust, which focuses on HIV/AIDS programs for men who have sex with men and transgendered individuals, and Aastha Parivaar, an organization of sex workers that addresses their communities’ health, crisis, literacy and other needs. They also visited the Niramaya Health Foundation, which works with rag-pickers at the garbage dumps by improving health care, sexual and reproductive education, and literacy for children collecting garbage at the dump to earn a small income. At the Harbour Line Slum, they learned about the challenges of slum living, such as contaminated water and low immunization rates. Finally, the writers visited the Bombay Teen Challenge, a group that rescues and cares for sex slaves in Mumbai brothels and cares for the children of sex slaves, addicts and runaways.

These groundbreaking trips galvanized interest in global health issues, and inspired the writers and producers to develop global health-related storylines.

“For me, the journey really brought home how connected we all are, and how disease can cross borders,” said one writer. “It really endorsed our need to educate all corners of the world on health. And our changing environment is more important than ever.”