I Am a Citizen (and So Can You!): The Art of Great Civic Involvement 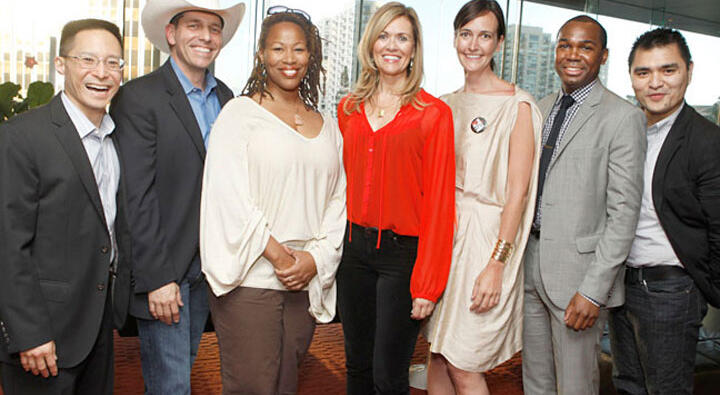 Hollywood, Health & Society and the CAA Foundation co-sponsored a panel discussion on the art of being a great citizen on June 27 at the Creative Artists Agency’s Ray Kurtzman Theater in Los Angeles.

In publicizing the event, the foundation—the philanthropic arm of the legendary Hollywood talent agency—cited the polarization of American politics in Washington, D.C., as a major obstacle to addressing the nation’s problems such as health care, social justice and the political system itself. “But all around us citizens are fixing what’s broken and reclaiming democracy,” the CAA said.

Following introductory remarks by Darnell Strom, an executive with Creative Artists Agency, and Eric Liu, founder of the Guiding Lights Network, the scene was set for the panelists to talk about the importance of civic activism, and building on what Liu said about culture being the bedrock of “how we show up for each other in life ... about what we are in community.” A common identity, Liu said, that says what it means to be American.

Vargas, a journalist, shared in a staff Pulitzer Prize while at The Washington Post for its coverage of the Virginia Tech shootings in April 2007. He has written for The New York Times, Rolling Stone, The New Yorker and other major national publications. Born in the Philippines, he was sent by his mother at the age of 12 to live with grandparents in Mountain View, CA. Four years later, on a visit to the local DMV office to apply for a driver's permit, he discovered—after a clerk rejected his green card as "fake"—that he had been in the country illegally. His desire to be part of his adopted land was so great, he said, that he desperately wanted to erase his Tagalog accent (and thus his Filipino heritage) and learn English. Entertainment, in the form of movies and TV, was his ticket.

In 2011, he did an essay for The New York Times Magazine titled “My Life as an Undocumented Immigrant,” in which Vargas wrote about the sting of discovering that he was not a citizen, and not exactly welcome: “I decided then that I could never give anyone reason to doubt I was an American. I convinced myself that if I worked enough, if I achieved enough, I would be rewarded with citizenship. I felt I could earn it.”

During the panel discussion, Vargas mentioned the 12 million undocumented immigrants like himself living in this country, and said a “process” was needed to resolve the issue—and the seemingly never-ending arguments—for a better America.

“We have a stake in each other,” he said. “My existence doesn’t threaten yours. I’m not taking away a slice of your pie; we’re actually making the pie bigger.”

Next up was Smith. Rock the Vote was founded two decades ago in Los Angeles by members of the recording industry with a mission to help engage and build political power for young voters—using music, popular culture, new technologies and grassroots organizing.

In briefly talking about her background, Smith described herself as a fairly average college student at Duke University “with four majors” who didn't know what she wanted to do with her life. She "lucked into" a role with Green Corps, a leadership training program for grassroots organizers, and realized that she loved the work.

She soon found herself directing a campaign—holding rallies and gathering petition signatures—to save the last 60 million acres of wilderness areas in our national forests, which then-President Clinton set aside for preservation in an executive ruling. But Smith's heady feelings of success were short-lived, however, when President Bush overturned the edict during his first few weeks in office.

Devastated, Smith said that the lesson she took away from the experience was this: "We can organize on the issues we care about all we want, but if we’re not voting then we won’t have the power we need to make long-lasting changes."

At Rock the Vote, she has spent the last 12 years mobilizing and registering millions of young voters, who are frustrated over a political system that does not work for them, a record rate of unemployment and staggering amount of student loan debt. Yet despite it all, Smith said, young people remain optimistic that they can change the world—46 million of them who can wield enormous power just by showing up and voting.

"When you show them how, this generation steps up," Smith said.

Meckler sounded a similar theme in his remarks, one of extreme frustration over hyper-partisan politics, and the belief that the system in Washington, D.C.—which he called "the favor factory"—is rigged against the vast majority of Americans.

"I didn’t have anybody speaking for me and my values," Meckler said. Until one day CNBC reporter Rick Santelli came on the air in 2009 and delivered a "rant" about having to bail out the people he called "losers" who made bad decisions in buying a home with mortgages they couldn't afford.

He said Santelli's call lit a fire, and the Tea Party was born. Small groups of similarly frustrated Americans throughout the country—of all political stripes and walks of life, Meckler said—released their pent-up feelings by participating in protests and holding small gatherings in their homes. Meckler quickly found himself as one of the nascent party's major organizers in California and soon nationally.

Meckler said the Tea Party is, in short, the reaction of everyday Americans to the fiscal irresponsibility of our elected leaders in government.

"There is a price to pay for citizenship," he said. "And some citizens, regardless of their ideology—[from] both sides, both parties—somebody’s going to stand up and speak, and when they do they’re going to pay the price, and it’s entirely worth it."

Clack, a staunch advocate of promoting health care issues through the media, described growing up in Houston as a solid student who was groomed by her mother and the other adults in her life to become a doctor or a lawyer. Playing constantly with chemistry sets and microscopes, her life's path seemed destined, until she got to Northwestern University and felt the pull of its Department of Radio, Television + Film. There, she majored in communication, but completed all her premed requirements with a secondary major in neurobiology and ultimately graduated from medical school. She also found the time to get a masters of public health degree in behavioral sciences.

After a short stint with CDC in Atlanta on some international assignments responding to health emergencies abroad, she made her way to Los Angeles.

"I got the bug again and thought I might want to act," Clack said. "I had a good backup job with the doctor thing going."

Instead, she found work as the on-set medical adviser for the hit show ER, where she came under the wing of Neal Baer, a fellow doctor and executive producer of the series. It was then on to becoming a TV writer, which included the CBS show Presidio Med, and moving her way up to her current role as co-executive producer of Grey's Anatomy, now in its ninth season.

Clack knows first-hand the power of television to get the message out, whether it's about politics or health issues.

“It's been the perfect merger of my public health [background] and my desire to entertain," she said. "When I travel, Grey's Anatomy follows me wherever I am. I've seen it in many different languages." She echoed Vargas' point that millions of people in the world learn about America through its culture—specifically television shows and movies.

It's not lost on [those who work in the entertainment industry]," Clack said. "We are very clear that we have a responsibility out there."

Beyond Bars: Changing the Narrative on Criminal Justice