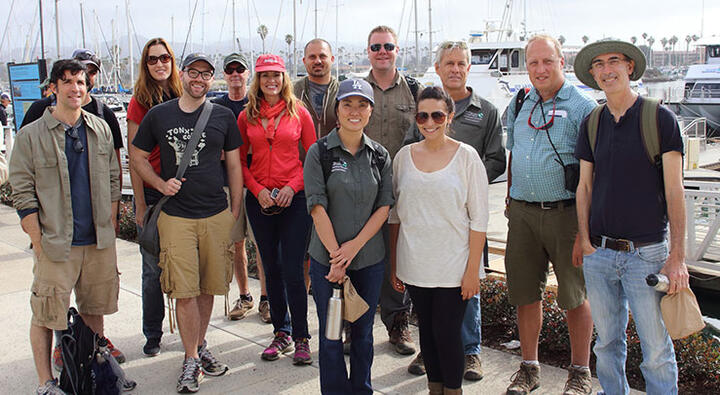 Group of writers, HH&S staff and experts from The Nature Conservancy at Ventura Harbor. Photo by Howard Pasamanick

Hollywood, Health & Society led a select group of writers on a “Jurassic Park”-style tour of remote Santa Cruz Island off the coast of Santa Barbara to learn about the effects of climate change, wildlife restoration efforts and how to live in a sustainable, off-the-grid environment.

On the way back, the group was spellbound by a rare treat—a mega-pod of thousands of dolphins swimming alongside the ship, with a handful of 50-foot humpback whales that repeatedly surfaced as they all feasted on great schools of small fish.

Accompanied by two experts from The Nature Conservancy—John Randall and Ric Wiles—the six writers and HH&S support staff departed early-morning, overcast Ventura Harbor for the hour-long crossing by ferry. A bumper sticker on the ship’s bridge read “I Brake for Whales”—a harbinger of things to come later in the day.

“We’re thrilled to provide you with this exclusive access to a hidden world that very few get to see,” HH&S Director Sandra de Castro Buffington told the writers and producers. “And we hope that the real people you meet and the stories they tell will inspire and inform your work.”

The island’s rich history includes everything from explorers to prisoners. It was the site of a thriving Chumash Indian population, and later became a major ranching operation—cattle, sheep and pigs. But the introduction of livestock put the island and its endemic species of plants and animals on the road to ecological collapse. Pigs and sheep that escaped and became feral overgrazed the island, decimating native plants and habitats that supported the island foxes, scrub jays and other species. A new predator, the golden eagle, moved in and preyed on the pigs and foxes.

According to the conservancy, “managing human interaction with native plants and animals is vital to maintaining the island’s health.” The small group of visitors allowed on this tour—there’s no public access on this part of the island—underscores the need for leaving a small footprint.

As part of an extensive, multi-year restoration program by the conservancy, park service and the U.S. Fish and Wildlife Service, the pigs and sheep were removed. Marshlands have been slowly restored, and colonizing numbers of golden eagles have been trapped and relocated. The island’s native bald eagles—whose diet consists of fish—were reintroduced, and today there are three nesting pairs. The fox population is back up to a healthy 1,300.

Today, the island’s seclusion requires the small conservancy staff to bring in from the mainland everything it uses—from gasoline and diesel fuel to groceries and serious medical aid. About ninety percent of the electricity used at the old ranch compound—now the conservancy headquarters on the island—and at a nearby research center is solar-generated.

“Everything we do, all of our wells, our septics, are self-contained,” said Wiles, who added that the staff on the island are trained to a level of medical preparedness one step below an emergency medical technician.

Fire is a major threat for the island, which is now in its third year of severe dry conditions, Wiles said. But he acknowledged that the island is in a precarious position when it comes to fighting blazes. In 1994,  a fire burned for four days and consumed 650 acres, requiring 120 firefighters to be brought from the mainland to get it under control.

In the event of a major fire, Wiles said, the strategy quite possibly could come down to one word: evacuate.

What effects climate change will have on the plants and animals on Santa Cruz are largely unknown right now, Randall said. A sea level rise from melting glaciers would have minimal impact because of the island’s steep geographical relief, but scientists are concerned about how warming temperatures will affect fog—a major source of moisture for the island—and rainfall. The island has two major micro-climates, with the windward side getting enough precipitation to support forests of Bishop pines.

“We’ll have a drier future, but we don’t know to what extent,” Randall told the group of writers at the top of a ridgeline, after a bumpy truck ride along rocky trails.

Fog, rain, temperatures—they’re all some of the factors considered in managing the island, Randall added. “We’re here for the long-term,” he said.

According to the conservancy’s website, “managing human interaction with native plants and animals is vital to maintaining the island’s health.” The small group of visitors allowed on this tour—there’s no public access on this part of the island—underscores the need for leaving a small footprint. All domestic animals—from cats to goldfish—are prohibited. In the case of dogs, conservancy officials are keenly aware that canine distemper could spread to the fox population. Horses are also not allowed because any feed introduced runs the risk of carrying the seeds of non-native plants. Conservancy and park rangers are also vigilant about rats stowing away on watercraft that later dock or anchor near the island. In addition to being possible carriers of disease, rodents could decimate the island’s rare species of birds by eating their eggs.

For the group of HH&S explorers, the Storybus Tour was a great chance to visit what is, in effect, a Lost World. The island in its isolation is a species stronghold that resembles a miniature California from the distant past.

Writer Marc Warzecha had one word for a day full of natural wonders: “Fantastic.”

“It was all great,” said Marlana Hope, a story editor from the hit Lifetime TV show Army Wives. “Got a good work-out getting [bounced] around in the back of those trucks.”