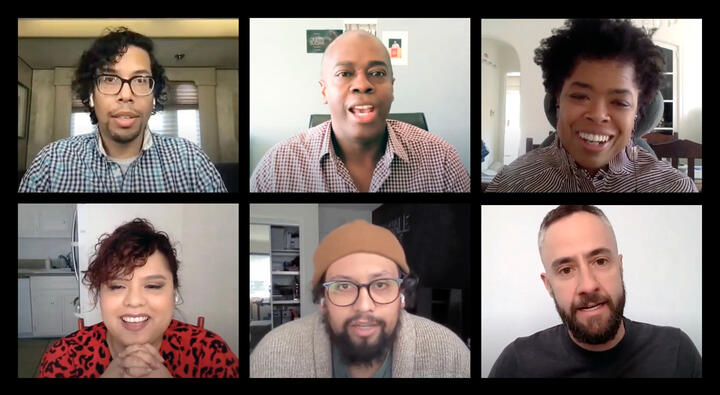 Hollywood, Health & Society brought together five leading creative talents behind current TV series that are changing up the narrative of what poverty looks like. In much of their storytelling, marginalized communities and people who are poor struggle for a fair shake and the elusive American Dream.

Before the entertainment panel discussion began, Erica Rosenthal, director of research at The Norman Lear Center, and Riki Conrey, director of data science at Harmony Labs, previewed findings from their research on poverty and wealth narratives in popular culture. The “cultural audit,” supported by the Bill & Melinda Gates Foundation, looked at how the working class is depicted in media, dominant narratives in scripted entertainment, the importance of addressing issues such as race and class, and how popular sitcoms may stereotype people who struggle economically. Read the interim summary of research. For more information visit mediaimpactproject.org/poverty.

The "bootstrap" theory—that individualism and hard work will lead to self-improvement and economic prosperity—is a dominant belief about how to get ahead in this country. But the shows represented at the panel reflect the reality that it's way more complicated than that, and their stories reject the idea that poor people themselves are to blame for being poor.

An article in Variety called them "a new breed of TV series [that] present a more dynamic view of what it means to live on the margins." And in the case of Gentefied, especially, the storytelling paints a proud portrait of people living in a working-class community. Lemus said the show's intent was to portray characters as "unafraid and unashamed" of who they are.

One of the major barriers that many people face is access to medical care—a recurring theme in the storytelling of New Amsterdam. The show's setting is based on Bellevue Hospital in New York City (founded in 1736 and the oldest public hospital in the U.S.), and the medical drama won a 2020 Sentinel Award for an episode titled "Righteous Right Hand."

In the episode, a van carrying a Black women’s church group heading home to Alabama hits a highway embankment, sending driver and passengers to the emergency room. Half the patients, it turns out, have untreated pre-existing health conditions because they're uninsured and lack money for medication, or the nearest hospital to their rural-area homes has closed. Before the trip, the driver bought supplemental personal injury insurance at the van rental office, affording her friends medical treatment in the event of an accident. Then she takes a calculated risk by intentionally steering the van into the embankment.

"The systemic issues that exacerbate health care in this country are astonishing," Green Swafford said. "We try and tackle things that keep people continually in problematic situations, such as racism compounding other health factors for [people of color]."

The panelists agreed that progress has been made in getting these stories told, but the discussion at one point turned to the fact that Hollywood firmly remains a straight, white, cisgender, male-dominated industry.

"If you look at the five of us, we don’t check [all] those boxes," Canals said. "So what we’re seeing on our TV screens is still not reflective of the world that we live in. There’s all this labor that we have to do when we get into a [meeting] room to convince folks that our stories have value, especially when those stories we’re pitching are centering narratives of people who look just like us."