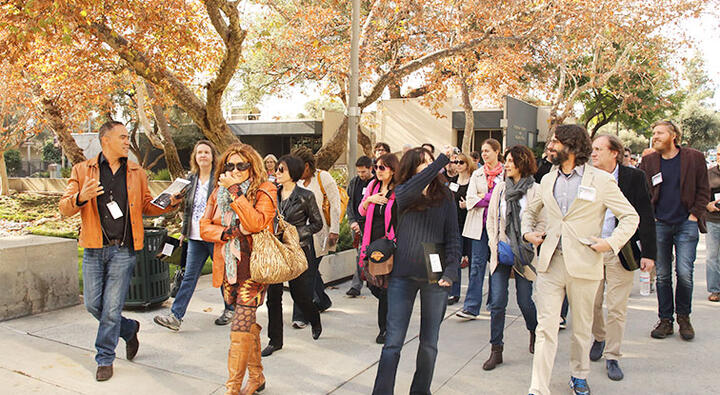 Writers tour NASA-JPL campus, where they learned about climate change and mitigation efforts from some of the top scientists and engineers; the group gets a look (below) inside the space flight center. Photos by Howard Pasamanick

With the sun shining and deer quietly nestled on patches of lawn at the wooded, tranquil NASA-JPL complex in the foothills near Pasadena, it’s easy to forget that some of the world’s most advanced research is being conducted—right here in our own back yard—on how to counteract the dark threat brought on by global warming.

But that’s exactly the reason that Hollywood, Health & Society took more than 35 film and TV writers and producers on an exclusive, behind-the-scenes Storybus Tour to the sprawling campus: to learn about climate change and mitigation efforts—a few of them positively sci-fi-esque—from the scientists and engineers working on the front lines to address the crisis.

“JPL is at the forefront of climate science research,” said Kate Langrall Folb, director of Hollywood, Health & Society, calling global warming the most important health issue of our time.

Josh Willis, a project scientist and oceanographer, told the writers during the early-morning bus ride to NASA-JPL that with two-thirds of the planet covered by water, the biggest indicator of global warming is found in the rising temperature and acidity of the oceans, along with sea level rise. Ninety percent of the greenhouse gases are captured by the oceans, which can absorb a tremendous amount of heat, Willis said.

“In a way, sea level rise is kind of a double whammy in terms of measuring climate change,” Willis added. “It tells us how much heat is going into the oceans and also how much glaciers and ice sheets are melting. It’s the most important [measure] we have that humans are changing the world in a dramatic way.”

The tour featured presentations from some of JPL’s leading experts, along with stops throughout the complex to see the mission control room for unmanned flights that included the 2012 landing of the Mars rover Curiosity, and the spacecraft assembly room, where technicians were meticulously piecing together the SMAP satellite for launch soon, which will map soil moisture. It’s part of a new and ambitious campaign of exploration that targets Earth instead of distant galaxies called “Your Planet Is Changing/We’re On It,” which includes five science missions in the coming year designed to measure our home’s vital signs.

Before breaking for lunch, the writers listened as Doug Ellison, a visualization producer at JPL, showed them how an array of tracking satellites already above the Earth measure everything from air temperature to ocean and ozone levels—even gravity—in real time.

The topic of climate change was front and center throughout the day, and if there was a theme that emerged from the remarks to the writers—on everything from albedo to tipping points—it was this: with the impact of global warming caused by the burning of fossil fuels growing more urgent with each passing day, policymakers and experts need to remain focused on mitigation.

Efforts in geoengineering—massive environmental projects meant to counteract the effects of global warming—while controversial, are gaining legitimacy, with ideas ranging from increasing the Earth’s reflectivity to return more of the sun’s energy (and heat) back into space, to the large-scale removal of carbon dioxide from the atmosphere. There was talk of robotic ships that sprayed seawater into the atmosphere to deflect heat, and aerosols dispersed in the stratosphere to diffuse sunlight. At one point, a writer wondered aloud if JPL might have some top-secret department developing a “super” artificial tree that could suck great amounts of CO2 out of the air. It didn’t sound so far-fetched.

Just what does the future hold, from the health of the oceans to biodiversity? Many of the scientists emphasized that with global warming, there’s still a lot that remains unknown about how it will affect both planet and life.

“We’ve done so much to the Earth’s atmosphere that there’s some rather large corrections that will have to be made [by nature] in the not-too-distant future,” said Charles Miller, a research scientist and the principal investigator on a project to measure trapped greenhouse gases in the Alaskan Arctic.

Eric Rignot, a scientist and engineer working on several projects to measure glacier ice movement in Greenland and Antarctica, acknowledged that it was all “a little bit scary,” and he added that despite whatever efforts we attempt to address global warming, “what’s going to happen [environmentally] in the next hundred years is already written in stone.”

Still, the writers and producers came away from the tour energized from the daylong activities.

“I thought the information was great [and] presented in a compelling way,” said Andy Cobb, a writer-director and sketch comedian whose work has been seen online and on national media such as CNN, MSNBC and Comedy Central. “I think it could spark a lot of creative projects we’re working on.”

“This trip to JPL has been amazing,” said writer-producer Carol Barbee, who worked most recently on the FOX TV series Touch. “It’s been very inspiring and makes me want to write about these issues and get involved in making sure we do the right thing.”