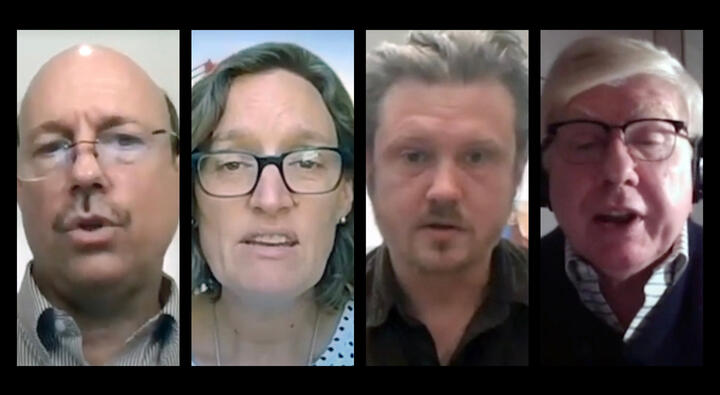 Hollywood, Health & Society, in partnership with the WGAE and WGAW, presented a virtual talk focusing on older adults and the challengers of caregiving during the pandemic. The panel was part of a series of discussions via Zoom on a variety of topics affected by COVID-19.

Dr. Bruce Chernof—Dr. Chernof is president and CEO of The SCAN Foundation, whose mission is to advance a coordinated and easily navigated system of high-quality services for older adults that preserve dignity and independence. Previously, Dr. Chernof served as the director and chief medical officer for the Los Angeles County Department of Health Services. He completed his residency and chief residency in internal medicine as well as a fellowship in medical education at UCLA. He earned his medical degree from UCLA and completed his undergraduate work at Harvard University.

Kim McCoy Wade—Wade is the director of the California Department of Aging. She most recently served as the head of the CalFresh & Nutrition Branch at the California Department of Social Services, where she led the expansion of food benefits to older adults and people with disabilities, as well as several data and technology initiatives, including the GetCalFresh mobile application. She previously served as a consultant to multiple health and human services non-profits and as executive director of the California Association of Food Banks. Earlier in her career, she worked in Washington, D.C. for the Children’s Defense Fund, Bread for the World, and the Alliance for Justice. She is an alumna of NYU School of Law, Carleton College, and the Jesuit Volunteer Corps. She lives in the Bay Area with her family.

Beau Willimon (co-moderator)—Willimon is the award-winning creator/executive producer of The First (Hulu) and House of Cards (Netflix). He co-wrote the 2011 political drama Ides of March (an Academy Award nominee for screenplay), which starred George Clooney and Ryan Gosling, and wrote the plays Farragut North and The Parisian Woman. Willimon is president of the Writers Guild of America East, and an advisory board member for Hollywood, Health & Society.

Michael Winship (co-moderator)—Winship is immediate past president of the Writers Guild of America East, and is the Schumann Senior Writing Fellow for the progressive news and analysis website Common Dreams. He was the Emmy Award-winning senior writer for Moyers & Company and Bill Moyers Journal on PBS, and the BillMoyers.com website, as well as a senior fellow at the policy and advocacy group Demos.

How TV Can Save Lives During Covid-19