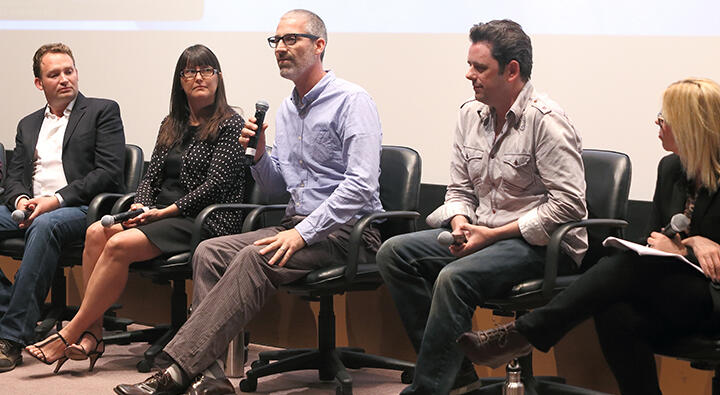 An invitation-only audience was treated to a special screening of “Chasing Ice,” photographer James Balog’s hauntingly powerful 2012 documentary about Earth’s disappearing glaciers, on May 23 at the Writers Guild Theater in Beverly Hills.

Co-sponsored by Hollywood, Health & Society, a program of the USC Annenberg Norman Lear Center, and the Environmental Media Association, the event featured a panel conversation with Paula DuPré Pesmen, a producer for the documentary, and the film’s writer, Mark Monroe. They were joined by two climate scientists—Dr. Josh Willis of the NASA Jet Propulsion Laboratory, and Dr. Paul Bunje, senior director for prize development at the XPRIZE Foundation and a founding executive director of UCLA’s Center for Climate Change Solutions. HH&S Director Sandra de Castro Buffington and EMA President Debbie Levin served as the evening’s moderators.

Balog, who was on assignment for National Geographic in the Arctic, used innovative time-lapse cameras to gather a painstaking, multi-year record of ancient mountains of ice succumbing to global warming, and he and his assistants sometimes risked their lives to capture the images seen in the film.

“We hope you’re all entertained, informed and inspired by this compelling film,” Buffington told the audience before the screening.

Compressing years into seconds on screen, Balog’s work presents a breathtaking view of massive sheets of ice as they melt away—Balog refers to the glaciers as “dying.”

At one point in the film, part of the photographer’s equipment breaks down, and he and his crew struggle to get the camera back working. “If I don’t have pictures, I don’t have anything,” Balog says.

The images are powerful enough on their own, but Balog himself serves as an equally eloquent and effective narrator when it comes to the star of the documentary—beautiful ice in all its endless variations, which Balog likens to human portraits. Ice, the photographer says, is “sculptural, architectural ... insanely beautiful.”

Balog points out that we think of geological change as something that occurred in the distant past. But it’s happening right now, he says—and quickly. “We simply don’t have time to argue about climate change anymore,” Balog says.

As the credits rolled to “Before My Time,” a captivating song performed by actress Scarlett Johannson and Joshua Bell, the panelists took seats on stage to discuss the making of the film and its impact. Pesmen said she’s noticed a “big sense of urgency” among audience members at screenings all over the country.

“To see the effects of climate change is really powerful,” Pesmen said. “James’ [Balog] work really does that for us.”

Both Pesmen and Monroe recounted the evolution of the film—the project started out as more of a personal look at one man’s quest. When they began production, Monroe said, the opponents of finding solutions to global warming had the upper hand in getting their message out.

“My job first is to entertain folks,” said Monroe, who added that the filmmakers were hesitant to make a picture with a message that could be seen as too political. Instead, the plan was to focus more on presenting a personal look at Balog and his adventure.

But then the pendulum about climate change swung back to the other side, Monroe said, and in the process of making the film they became emboldened about making a picture that clearly showed the effects of global warming and called for action.

“I think we are actually winning [the global warming argument], and this picture is proof of it.” he said.

Pesmen agreed that the filmmakers became empowered as production went along. She remembered the decision coming down to “let’s just put [the message of what climate change is doing] out there and make it accessible.”

“For us to buy into it’s a political issue is nonsense,” she said. “It affects everyone on the planet.”

For Willis, a leading expert on global sea level rise, the screening was his first look at “Chasing Ice,” and he said that he was “amazed and dumfounded” at what the film conveys so clearly. “This movie captures [the effects of global warming] in a way that I never have quite seen before,” he said. It’s a message, Willis added, that he himself has been struggling to fully convey to the public.

Individual behaviors geared to reducing one’s carbon footprint are all important, Willis added, but to really bring about global change requires action at the highest levels. “I like to tell people how you vote is as important as planting a tree or driving a Prius,” he said. “Ask [government representatives] for policies that have an impact on how we use energy, because most emissions stay in the atmosphere for a thousand years, and the planet will react to what we do for a thousand years. What we do today is going to be with us for generations.”

Bunje said the solutions to climate change were three-fold: policy, individual behavior and scientific knowledge. The idea, he said, is not to rid ourselves of fossil fuels—which have raised the standard of living on the planet—but to lessen their impact through alternative sources of fuel and other innovative technologies that Bunje said are feasible right now.

“We can be a little bit optimistic,” he said.

But he too was struck by the film’s images, and said its message goes beyond disappearing glaciers. “Climate change isn’t just about the ice that’s melting,” he said. “It’s the story of how a civilization that was built on 10,000 years of stable climate since the last Ice Age has decided to put itself on a high-carbon diet that’s going to give us a climate that we’ve never seen in our evolutionary history.”

“We’re talking about civilization in the balance,” he said.