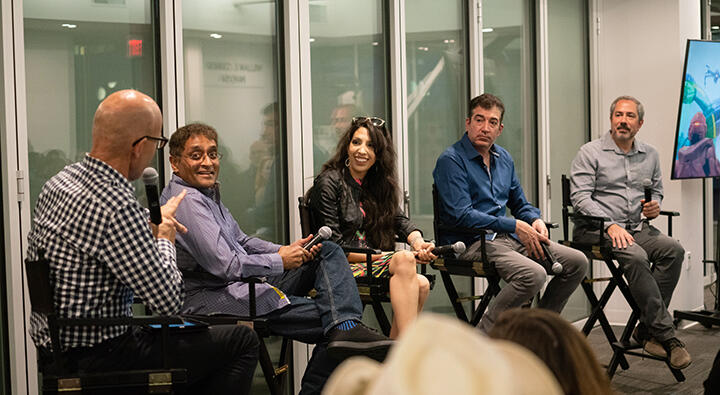 In its first live event in more than two years, Hollywood, Health & Society brought together experts and TV writers-producers to explore the topic of emerging A.I.-driven technologies, including lethal autonomous weapons known as "slaughterbots," and their depiction in entertainment storylines.

The reception and panel, held atop the Petersen Automotive Museum in the rooftop pavilion and terrace on June 8, featured the following speakers:

Keith Eisner, a television writer-producer who served as the showrunner for the ABC political drama Designated Survivor, and the recipient of a 2020 Sentinel Award for an episode of Madam Secretary titled “Killer Robots,” about the dangers of autonomous weapons; Naren Shankar, executive producer of the Amazon series The Expanse; Dr. Emilia Javorsky, a physician-scientist who leads the lethal autonomous weapons policy and advocacy efforts for the Future of Life Institute; and Anthony Aguirre, the Faggin Presidential Professor for the Physics of Information at UC Santa Cruz, and co-founder of the Future of Life Institute, where he serves as executive vice-president and head of policy and strategy. John Horn, who covers Hollywood and entertainment for NPR’s KPCC (89.3-FM), served as the discussion moderator.

Should someone think that the idea of robots being used as deadly weapons is still well within the realm of science fiction, or off in a distant future, they would be wrong. In the Ukraine-Russia war, according to an article in Foreign Policy, drones have become “a dominant—if not the dominant—feature of the conflict.

“Hundreds of kamikaze-like loitering drones … can hunt targets for hours before dropping down to detonate a deadly munition,” the FP story reported.

Closer to home, Horn told the panel, Axon, the maker of the Taser used by police forces nationwide, had promoted the idea of a school-based drone armed with stun guns to disable active shooters. As a result, he added, nine of the 12 members of the company’s ethics board members resigned in protest.

Reuters reported that “ethics board members had concerns that the system could be used in circumstances beyond shootings and exacerbate racial injustice, undermine privacy through surveillance and become more lethal if other weapons were added.”

In a statement, the nine members of the ethics board who quit said: “The Taser-equipped drone also has no realistic chance of solving the mass shooting problem Axon now is prescribing it for, only distracting society from real solutions to a tragic problem.”

The company has since announced that it has put the development of Taser-armed drones on hold.