Stayin' Alive: The Truth About Obamacare 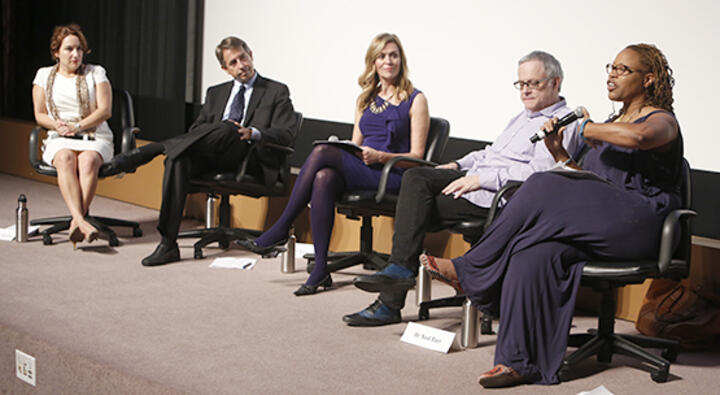 "Stayin' Alive: The Truth About Obamacare": The panel discussion about access to health care was just what the doctor ordered. Photo by Howard Pasamanick

“It’s a topic that has had lots of heat,” said Martin Kaplan, the founder and director of the USC Annenberg Norman Lear Center, in his opening remarks at the event held June 27 at the Writers Guild Theater in Beverly Hills. “I hope tonight will not only add light but also the human face—the stories that are so central to what it’s all about.”

And Obamacare, as everyone knows, seems to have drawn its fair share of myths. Death panels, anyone?

To provide a much needed dose of truth and just plain wonkish facts mixed with some Hollywood sizzle, HH&S—a program of the Lear Center that provides writers and producers with accurate and up-to-date information on health storylines—invited guest speakers Peter Lee, executive director of Covered California, the state's health benefit exchange; Dr. Victoria Sorlie-Aguilar of the Centers for Family Health; Dr. Zoanne Clack, executive producer for Grey’s Anatomy; and Dr. Neal Baer, executive producer for Under the Dome. Buffington served as the evening's moderator.

“For the last three years [since the Affordable Care Act (ACA) was signed into law] there’s been a drumbeat of misinformation about Obamacare, and very little real facts,” Lee said. “This isn’t about death panels, this isn’t about anyone coming between patients and their doctors, and this isn’t about a government takeover of health care.”

According to the website obamacarefacts.org, almost 50 million Americans still lack health insurance. Although the bulk of the provisions in the ACA don't go into place until 2014, this year will offer a first look at how two of Obamacare's biggest programs—Medicaid expansion and the insurance exchanges—will work.

Lee called it the biggest change in the American health system since Medicare was implemented 50 years ago.

“For the first time we as a nation are saying everyone has a right to health care,” he said, with policies that will be put in place to help people afford insurance, based on income. Calling the ACA “a very big deal,” Lee said that no longer will health insurance companies be able to deny coverage to those with pre-existing conditions, or ratchet up the premiums of those who do.

Starting in January 2014, Lee told the audience, the rules change for insurers. “Right now [they] pick healthy people and try to avoid sick people.” He explained how the ACA will standardize benefits—no more “gimmicks and the gotcha game” about what gets covered—and inject competition into the marketplace, with 90% of Americans being able to choose from among, on average, five or six health plans. All told, Lee said, 45 million Americans who don’t have insurance will have the opportunity to be covered.

A provision now in place enables young adults up to 26 years old to be covered under their parents’ policies. Just down the road, Obamacare promises a new emphasis on preventive care, and expanded coverage for prescription drugs for seniors.

“But it’s more [than just] about policy stuff,” Lee reminded everyone. “It’s about people’s lives. We all have friends, neighbors and family touched by the lack of health insurance”—the tales of people losing their jobs, losing their coverage, and then losing their homes when someone got sick and the medical costs piled up.

Dr. Sorlie-Aguilar agreed, telling the audience that “a lot of these issues which are sort of political and economic come down to a human being behind an examine-room door.” Someone very much like Adella, a middle-age woman who, the doctor said, had no idea that she had high cholesterol, diabetes and high blood pressure until the day she landed in a small-town emergency room a few years ago.

Adella’s right arm had gone limp and she had difficulty speaking, said Dr. Sorlie-Aguilar. Diagnosed with a “mini-stroke,” she was treated and sent home, with instructions to follow up with her primary care doctor. But a family physician was not possible without health insurance.

”Just your average working mom trying to make ends meet,” said Dr. Sorlie-Aguilar, whose Centers for Family Health clinic in Oxnard was the next stop for Adella. She added that routine blood work—the kind that will be covered under Obamacare’s free preventive care—would have flagged Adella’s symptoms before her condition worsened.

“Adella is a tragic example of why we need to have Obamacare ,” said Dr. Sorlie-Aguilar. “It’s about how one woman’s life—a mother, sister, grandma—could have been changed.”

Baer and Clack weighed in on the conversation wearing two hats—as doctors and TV producers.

Health care—or the lack of it—is indeed fertile ground for good dramatic conflict in TV shows, they said, with Baer calling it “the story of our lives.”

“Writers have a responsibility to tell all kinds of stories dealing with social justice,” Baer said. “To tell engaging stories and to tell them accurately, because people believe what they see on TV.”

With the ACA still facing so much opposition, Baer said that the goal was to “normalize” the view that health care is a basic human right. “I think one way is through storytelling—tell the stories that invigorate us and make us talk to our [policy-makers] and talk to each other,” he said. The recent Supreme Court rulings that were major victories for same-sex marriage, Baer added, demonstrated that minds can be changed.

“And they were changed over time because of storytelling reflected in many television shows,” he said, which helped win over public opinion about gay rights.

As a doctor, Baer saw Obamacare as an important opportunity to begin addressing the social determinants that affect people’s health—the circumstances in which they are born, grow up, live, work and age, according to the CDC website— and their consequences. Are they being exposed to environmental toxins in their neighborhoods? Do they have poor access to fresh, nutritious food? An emphasis on preventive measures through outreach and education, Baer said, would mean a dynamic shift in the way we think about our health.

"It's health care as care before people become seriously ill and have to see a doctor," Baer said.

Clack recalled that the topic of health care coverage was fraught with frustration during her days as a young emergency medicine physician, navigating her way through the insurance system and rules on behalf of the needy patients that she usually attended. Often, she found that she couldn’t refer a patient to another doctor for continued care because they didn’t have health insurance, or lacked the right kind of insurance.

Perhaps Clack was reflecting those frustrations from her medical days when she pitched an idea that later became an episode storyline in the seventh season of Grey’s Anatomy, in which the character Dr. Theodora “Teddy” Altman impulsively marries a seriously ill patient named Henry so he can benefit from her health insurance.

“Insurance gives [Grey’s Anatomy] a huge storyline,” Clack said. “It’s been a big issue that we’ve tried to tackle on the show. It’s very dramatic for patients not to have insurance and for our doctors to push for them.”

Obamacare, she pointed out rather ruefully, “is going to be extremely bad for our drama.”

Don’t bet on it. With some states opposed to expanding Medicaid—an important piece of Obamacare—and a good part of the American public unsure of what health care reform actually means for them, powerful storytelling is needed now more than ever.

There’s still a lot of minds out there that can be changed.