A Tale of Two Cities—How the Environment Affects Health 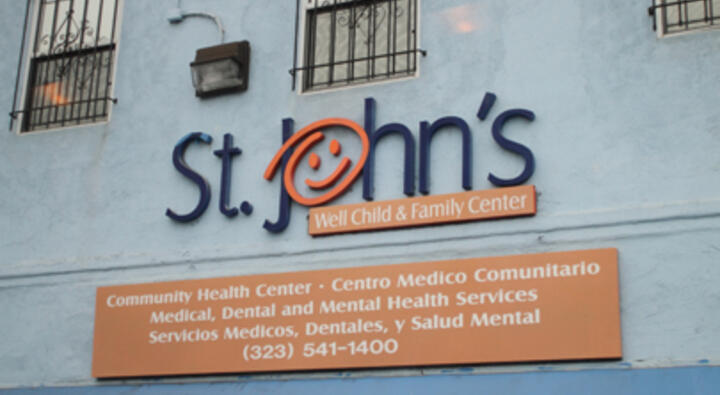 The St. John's Well Child and Family Center in South Los Angeles, one of the stops during the Storybus Tour. Photo by Howard Pasamanick

A mother secures her food provisions by hanging them from the ceiling in the middle of the family’s apartment, safe from the cockroaches and rats. A scene from a developing country in an impoverished part of the world?

It was the first destination for a group of entertainment industry writers and producers on board the recent Storybus Tour led by Hollywood, Health & Society Director Sandra de Castro Buffington and Dr. Neal Baer—this one focused on a simple question: What does a ZIP code reveal about someone’s health?

The mother’s story was one of many that housing activists, health workers, organizers and residents told during the tour’s visit to the St. John’s Well Child and Family Center, which together with the Esperanza Community Housing Corp., Strategic Actions for a Just Economy (SAJE), and the Los Angeles Community Action Network form a collaborative effort that wages a battle every day—with some substantial success—against some of the worst slum housing and its effect on the health of thousands of people, especially children, in South L.A. According to the center, roughly 80% of families in South Los Angeles live in substandard and slum housing.

The list of health repercussions is long: rashes and respiratory ailments from mold brought on by faulty plumbing, rat bites, depression and lead poisoning—54% of kids have elevated amounts of lead in their blood, a condition that can cause problems in development and damage to the nervous system. Moreover, 28% of children examined at the center have chronic asthma brought on by pollutants, dust mites. mold and allergic reaction to cockroaches.

“In one apartment building, 24 kids—from babies to teens—all had asthma,” said Jyotswaroop Bawa, associate director of SAJE, whose primary mission has been to battle slum housing conditions while educating and organizing tenants about their rights.

Topping the list was one grim fact: residents in communities in South L.A. have the lowest life expectancy—72.4-79.2 years—compared to the Los Angeles County average of 80.3 years.

Bawa was joined by Becca Sussman, associate director of development at St. John’s; Gabriela Gonzalez, program manager for Esperanza’s Healthy Homes program; and Beth Rodin, interim executive director of Esperanza, among others, for a short panel discussion that offered an overview of the center’s efforts in delivering health care and improving living conditions for community residents. Part of the housing campaign focuses on forcing slumlords to make necessary and substantial repairs to their rental properties and, when necessary, taking legal action.

Sussman described a “revolving door” phenomenon that once existed at St. John’s in which the medical staff would treat patients with health issues related to their housing conditions and send them home, only to have the same patients return with the same problems. “We had not really addressed the underlying issue of their illness which was a result of their housing,” she said.

That all changed when the St. John’s Center and its partners launched the Slumlord Criminalization and Health Impact Project to improve environmental conditions of children and families, and to enlist public opinion and the views of other agencies, officials and the media against slum landlords. One of the first steps taken was identifying children and families facing the most serious health conditions because of their housing. Ultimately, the project targeted three major slumlords who owned multiple properties—195 buildings and more than 3,150 units of extreme squalor. Some of it involved legal action.

The effort saw a marked improvement in the health of tenants and housing conditions, and more dedicated resources from government agencies. Equally important, it unleashed a new sense of rights among tenants—most of whom had previously lived in fear of retaliation from their landlords. Residents began to organize, participated in health education and tenant rights sessions, filed complaints to government agencies and became plaintiffs in lawsuits. Some slumlords were forced to divest themselves of their property.

The effort saw a marked improvement in the health of tenants and housing conditions, and more dedicated resources from government agencies. Equally important, it unleashed a new sense of rights among tenants—most of whom had previously lived in fear of retaliation from their landlords. Residents began to organize, participated in health education and tenant rights sessions, filed complaints to government agencies and became plaintiffs in lawsuits. Some slumlords were forced to divest themselves of their property.

It was a side of Los Angeles that many in the Storybus Tour group probably had never seen or heard about in such detail—the “unknown stories,” as Baer put it, that don’t get told—that won’t get told—unless writers do it.

“When you go yourself and see the story you really take away something more than just hearing [about] it ... when you see it with your own eyes,” said Baer, an executive producer whose shows include ER, Law & Order: SVU and A Gifted Man.

The power of writers to sometimes shine a light in dark places was echoed by Buffington.

“Scriptwriters are the master storytellers of our time,” she said. “Every day millions of viewers learn something new about health from TV storylines, and sometimes take action on what they’ve learned.”

Shortly afterward, the group accompanied Gonzalez as she carried out a nearby housing “intervention” in a worn but tidy bungalow, close by to auto body shops, tire retailers, discount shops and small bodegas.

Gonzalez said she was looking for environmental hazards such as mold or chipped, flaking and peeling paint, which poses a lead-poisoning risk if ingested by kids. Lead as an ingredient in paint was banned by the federal government in 1978, but many older homes and apartments still contain layers of old paint, especially on woodwork and window sills, just the right height for young children to get at.

The second half of the day took the entertainment group to Huntington Park, where they began a “toxic tour” of communities along the 710 Freeway that was led by Robert Cabrales, an organizer for Communities for a Better Environment, and Bill Gallegos, the group’s executive director. CBE works in low-income communities to reduce pollution and environmental hazards.

The cities along the 710, including Maywood, Commerce, South Gate, Walnut Park, Wilmington, Vernon and parts of unincorporated Los Angeles, are packed with scrapyards, metal plating companies, meat rendering plants, oil refineries, recycling yards and other examples of “dirty manufacturing,” some of them abandoned sites. Cabrales noted examples of children becoming sick because their schools were located next to the remnants of an industrial plant that turned the soil or groundwater toxic, or downwind from smokestacks that polluted the air.

What’s more, he said, there’s the added diesel pollution generated by the constant movement of trucks along the freeway and the massive BNSF Hobart rail yard. Throw in the Alameda Corridor—a below-ground, 20-mile-long rail cargo expressway that links the ports of Long Beach and Los Angeles to the railroad mainlines near downtown Los Angeles—and you have a noxious recipe for heavily polluted air. A 2012 impact study estimated that 35,000 trucks each day travel the 710, which federal, state and local government officials have proposed widening to accommodate the ever-growing cargo container capacity of the ports. And a recent ruling by the World Health Organization was the first to declare diesel exhaust a known carcinogen.

“Caltrans has an attitude from the ‘50s when it comes to building roads,” said Andrea Hricko, professor of preventive medicine at the Keck School of Medicine at USC, referring to the range of proposals to expand the 710. Community activists and organizers have voiced their opposition, and Hricko, who was one of the featured speakers on the tour, is a leader in efforts to safeguard the health of residents in the debate over plans to widen the freeway.

Cabrales and Gallegos told the Storybus Tour group that these areas along the 710 corridor have long been underserved when it came to having a political voice, but he did cite two major example where CBE organizers achieved victory.

The Storybus Tour pulled up alongside an athletic field at a new high school being built in Huntington Park, the site of what was once “La Montana,” the immense pile of rubble that came from replacing a portion of the Santa Monica Freeway damaged in the 1994 Northridge quake. Cabrales said the mountain of debris, which stood so long that trees were growing from it, had been a constant source of dust-related health problems for nearby residents. After a decade-long effort, spearheaded by community organizer Linda Esperanza Marquez, the pile was removed. The new high school is named after her.

Furthermore, according the the CBE website, when officials in the city of Vernon—which the Los Angeles Times reported as having only 74 registered voters—planned a new 943-megawatt power plant there that would have added 1.7 million pounds of chemical emissions and fine soot particles, CBE mobilized the community and took legal action. The proposal was killed in 2009.

At the end of the day, on their return to the Writers Guild of America, West, the writers and producers sat down with two community organizers whom Buffington said were addressing the “highest risk communities” in Los Angeles: Linda Kite, director of the Healthy Homes Collaborative that works to prevent lead poisoning in kids; and Isella Ramirez, co-executive director of East Yard Communities for Environmental Justice, which has been battling against the concentration of polluting industries in Southeast Los Angeles and fighting the expansion of the rail yards and 710 Freeway.

Both Kite and Ramirez described the painstaking work—”movement building,” as Ramirez put it—that goes into grass-roots community organizing: holding regular meetings with residents, going door to door, and working with researchers at local universities to bring in scientific evidence to help bring about policy change.