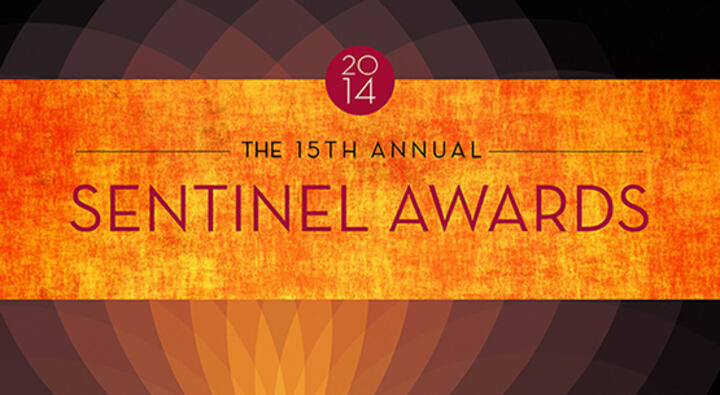 Hollywood, Health & Society’s 15th annual Sentinel Awards had it all, including top names from the entertainment industry, a NASA astronaut who wowed the audience when she recounted her childhood dream to one day follow in the footsteps of Neil Armstrong, and moving tributes to the spirit of two young boys who have touched many hearts—one a fictional TV character and the other whose real life flashed brightly and ever so briefly.

“The shows being honored tonight are amazing,” said Marty Kaplan, the director of the USC Annenberg Norman Lear Center, in his opening remarks. “And I’m especially thrilled to be doing the 15th year of the Sentinel Awards.”

NBC’s hit series Parenthood, now in its final season, received first place in the Drama category for its storyline about Hank Rizzoli, played by Ray Romano, who learns he may have Asperger’s Syndrome.

In accepting the award, executive producer Jason Katims talked about his autistic son being the inspiration for the show’s character Max Braverman, who has Asperger’s. Max’s journey from child to near-adulthood, which mirrors that of Katims’ own son, has been a central theme of the award-winning drama.

“My son is turning 18 in two weeks, making him an adult with autism,” Katims said. “I don’t know what exactly is in store for [him], but I know that his future success will be directly related to the level of understanding the world has toward him and other young adults like him.”

“Thank you for watching Parenthood,” Katims added. “Thank you for embracing the Hank Rizzolis and the Max Bravermans of the world. I love Max, I love Hank, and it’s been my distinct honor to tell their stories.”

This year, the Reality category was expanded to include talk shows and documentaries. Life According to Sam (HBO) took first place in the Reality/Talk/Documentary category for the topic of progeria, a rare genetic condition that triggers the rapid onset of aging and diseases related to old age. Sam Berns, the subject of the documentary, was a Massachusetts high school junior who became the public face of progeria. He died in January 2014 at the age of 17.

“We knew we had to tell the story of this disease that nobody knows anything about,” said Jeff Consiglio, who edited the documentary. “What we didn’t know is that we were going to fall so deeply in love with Sam Berns, and we fell in love with him not because he was sick but because he was joyous.

“He might very well have been the coolest kid I ever knew.”

The Normal Heart on HBO won first place for Drama TV Movie with a powerful story about HIV/AIDS activism in the early 1980s. Mark Ruffalo, Julia Roberts, Matt Bomer and Jim Parsons starred in the film based on the original play and screenplay by Larry Kramer.

Before presenting the award in the Climate Change category, NASA astronaut Dr. Yvonne Cagle talked about her childhood dreams of one day traveling from Earth to explore distant worlds.

“I remember when I first became intrigued with space, as a small girl watching that grainy image of human walking on the moon,” she told the audience. “At that moment, my dreams took wings. And I too wanted to one day see my footprint on the moon.”

In the Climate category, Years of Living Dangerously, Showtime’s nine-part documentary television series, won first place for an episode featuring Matt Damon on how rising temperatures are becoming a public health emergency. Longtime Hollywood producer Jerry Weintraub (Ocean’s Eleven, Ocean’s Twelve, Behind the Candelabra) was there to accept on behalf of Years of Living Dangerously, for which he served as executive producer.

Disney Junior’s hugely popular hit Doc McStuffins won for Children’s Programming for a storyline that stresses the importance of wearing a helmet when riding a bike. HBO’s Getting On took top honors in the Comedy category for its dark humor in dealing with the health-care system in an extended care hospital ward.

“It’s just important to remember that one of our jobs is to inspire the next generation of people who want to step on the moon or become doctors,” said Nee, the creator and executive producer for Doc McStuffins. “And that’s one of the things that Doc has done so successfully.”

The event, held at the Taglyan Center on Oct. 9, drew some stellar names from Hollywood. In addition to Weintraub, Katims and Nee, the ceremony’s guests included Alex Borstein, who plays Nurse Dawn on Getting On and presented the award in the Comedy category; and Dante Di Loreto, executive producer for The Normal Heart.

The awards are presented in partnership with the Centers for Disease Control and Prevention by HH&S, a program of the Lear Center at the University of Southern California’s Annenberg School for Communication and Journalism.