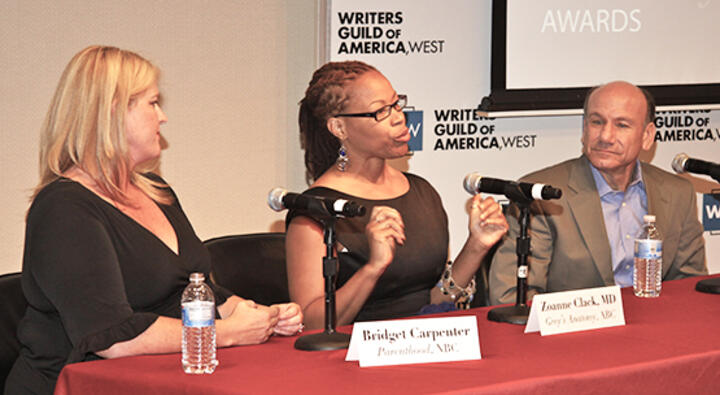 Following the presentations for the 2011 Sentinel for Health Awards, the winning writers participated in a panel discussion that offered behind-the-scenes looks about their respective shows and the genesis of some of their TV stories.

They were joined by Martin Kaplan, director of the USC Annenberg School's Norman Lear Center, and Sandra de Castro Buffington, director of the Hollywood, Health & Society, a program of the Lear Center. HH&S, which hosted the Sentinel Awards, provides entertainment industry professionals with accurate and timely information for health storylines, including briefings with experts on a wide range of public health topics.

Kaplan, who served as moderator, got things rolling by asking about the need for strong drama being constantly weighed against the medical facts. Can they recall a time when one or the other came out on top?

Llanas talked about one storyline that was part of the Off the Map episode that won in this year’s global health category, involving trapped miners underground. Originally, Llanas wanted to do a story about illegal gold mining, which he said is a huge problem in South America and a serious health issue because it involved the use of mercury, a potentially toxic metal that is often dumped into drinking and bathing water or is handled directly by the miners.

That story, Llanas said, then evolved into being about workers trapped in a collapsed mine—still a good topic because of the safety hazards that miners face and a subject very much in the news then with the constant media coverage surrounding the Chilean miners. But the story was deemed too “dark” by the powers-that-be, Llanas said, and “nobody wanted to spend an entire hour of primetime television underground in a coal mine.”

On a whim, Llanas said, he re-pitched the story to make it about an abandoned Inca gold mine that was cursed. Throw in some trapped miners and that’s how the episode eventually aired on TV. The story changed just a bit, Llanas acknowledged somewhat ruefully.