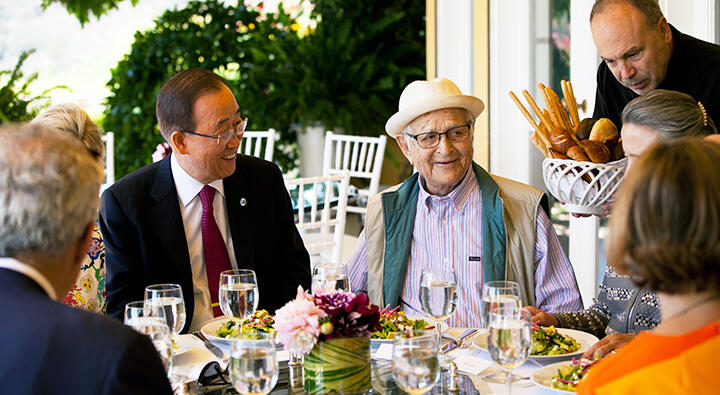 Hollywood, Health & Society held a special lunch with United Nations Secretary-General Ban Ki-moon and his wife at the home of Lyn and Norman Lear on Aug. 10, 2016, to discuss how the entertainment industry can help support the UN’s Sustainable Development Goals (SDGs).

In his introduction, Marty Kaplan, director of the USC Annenberg Norman Lear Center, quoted the Secretary-General: “The SDGs are the to-do list for the planet. They’re the world’s promise to itself.”

Directing his initial remarks to Norman Lear, the Secretary-General said, “Through your storytelling and vigilant initiatives you’ve been trying to bring about social changes. You have been trying to bring social progress into the living rooms of everybody. You have been making people laugh. You have been making people cry. I’m very much impressed, grateful and inspired by what you have been doing. You are legend in our time. I have been working very hard too, but nobody calls me a legend. I want to follow in your steps, but I’m not sure—I’m leaving in just five months.” Mr. Ban departs his position as Secretary-General at the end of December after nine years.

Rising to the Challenge  |  Photos  |  Video  | Hollywood Meets the SDGs

The Secretary-General addressed the gathering speaking of its power to communicate and how important storytelling is to reach people. “Your message, through TV and movies, can be seen by millions of people. And including reruns—I don’t know how many you can really reach! Last year when I spoke at the UN Climate Change Summit in Paris, there were less than 2,000 who saw it. But when Leonardo DiCaprio spoke, more than 2 million saw it. I was humiliated!”

After the laughter subsided, the Secretary-General discussed his “to-do list” for the world. “In September last year, world leaders of the United Nations were united in adopting the Sustainable Development Agenda with 17 Goals, starting with poverty eradication and gender quality, clean water and sanitation, sustainable energy and education. These solutions are far-reaching and ambitious visions that must be delivered to 7 billion people on this planet. We can be the first generation to eradicate abject poverty by 2030 and we are definitely the last generation that must tackle climate change.”

In a Herculean effort, these goals were agreed to by 193 countries—a milestone and the stuff of legends. “You have the most powerful communication skills and you can play a very important part,” said the Secretary-General.

The television industry expressed its commitment to spread the word to audiences with these important messages. Dr. Zoanne Clack, executive producer of Grey’s Anatomy, who has been an ER doctor and worked as a public health advocate around the world (and is co-chair of the HH&S advisory board), said, “It may seem like a frivolous endeavor to work in entertainment, but the power of the pen is the most powerful position I’ve had.” She agreed with the Secretary-General to get the messages out with stories that are relevant to the SDGs.

Jason Tracey, writer and executive producer of Elementary, voiced his commitment to help spread awareness of the SDGs, having already recruited other writers, producers and showrunners to do the same. “I started with my Fantasy Football team, and it just snowballed from there,” he said, noting that over 70 writers and producers have expressed interest.

“The SDGs are not the UN’s goals— they're all of our goals,” said Maher Nasser, the chief of the UN Public Information Project.

The Secretary-General thanked everyone for their interest and encouraged their participation. “When you write, you can make people believe. You can motivate. You can inspire. When people are inspired, we can make our world better for all people. And I need your help. You can make it happen. That’s why my appeal to you comes from my heart. I really count on your compassionate leadership. Let’s inspire the world.”