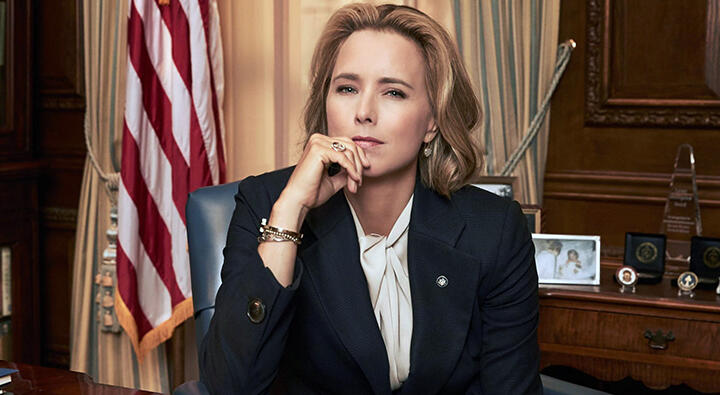 Madam Secretary, which starred Téa Leoni as Elizabeth McCord, a former CIA analyst who becomes U.S. secretary of state (and eventually president), mixed Washington politics with international intrigue and even some old-fashioned family domestic drama during its six-season run on CBS.

As aspirational as The West Wing, the idea for the series came about after a meeting among executive producers Lori McCreary, Morgan Freeman and network entertainment chairman Nina Tassler. The show's creator, executive producer Barbara Hall, drew inspiration in developing the McCord character from watching Secretary Hillary Clinton during the Benghazi hearings.

Hollywood, Health & Society had the opportunity to work with the show's writers and producers on several storylines and connect them with key nuclear experts, and our annual Sentinel Awards recognized two episodes over the years for their depiction of nuclear threats and global security risks.

The following are some of the activities related to HH&S' work with the show. It also offers an overview of how television shows can use resources for authentic storytelling that affects millions of viewers.

The following experts briefed the show's writers on episode storylines.

Following the screening of the Season 4 finale Night Watch, co-writers/executive producers Barbara Hall and David Grae joined Jeffrey Lewis and Joe Cirincione to discuss the episode, an alarming depiction of an impending retaliatory strike by the U.S. in the face of a nuclear attack that turns out to be a false alarm.

HH&S’ efforts also included live tweeting during the episode’s airtime in May 2018, and we arranged for experts and other partners to live tweet (Alexandra Bell on the East Coast, Joe Cirincione on the West Coast).

The posts resulted in #MadamSecretary trending on Twitter in the Top 10 for two hours. In addition, we helped organize a Reddit “Ask Me Anything” session the following day, with former Secretary of Energy Ernest Moniz (co-chair and CEO of Nuclear Threat Initiative) and Madam Secretary executive producer David Grae. The session had 6,000 viewers. Finally, HH&S conducted an impact study of the “Night Watch” episode on changes in knowledge and attitudes among audience members related to nuclear threats and vulnerabilities.