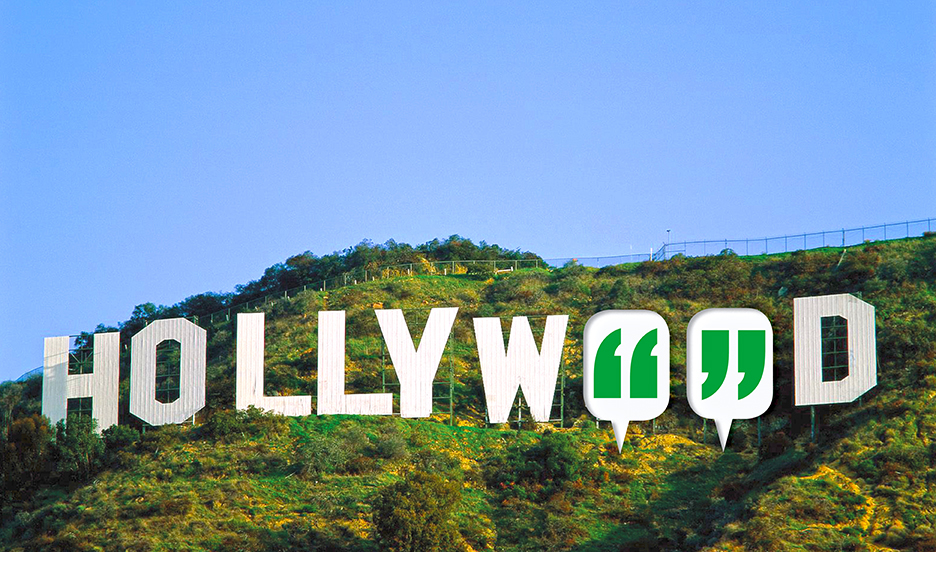 What Writers, Producers
and Researchers Are Saying

"We could not have told the stories we did without your and their help. Thank you!"
—Stephanie Drachkovitch, executive producer for 44 Blue Productions, "Strut," Oxygen

"The thing that always strikes me about the experts you folks bring to the table is not just that they're knowledgeable, but they're really enthusiastic and have terrific ideas.  These calls always make the scripts so much better."
—Jennifer Cecil, executive producer, "Notorious," ABC

"We’ve been using your service for years, and it’s been a viable source of information from all aspects of the medical field.  Thank you so much for all the research, and acquiring quick informal responses from medical professionals.  You simply are an important asset to us."
—Script coordinator, "Days of Our Lives," NBC

"I knew absolutely nothing about infectious disease when I called HH&S. They put me in touch with some of the foremost authorities in the country the very next day. The help they provided was nothing short of imperative to my writing process. They are a tremendous resource."
—Executive producer, "NCIS," CBS

One writer said, “this is the best event I have ever attended at the Writers’s Guild!” and another shared “I never thought about addressing global health until tonight!” At least one writer had been moved to tears: “Dr. Yamada’s story about the child dying in her mother’s arms made me cry.” Several writers let us know that they were inspired to create storylines about global health in the future, including a scriptwriter who now plans to pen a “global health mystery,” and another who said, “I don’t write about health issues but now I see how I can weave them into my stories.”
—Comments from scriptwriters after “A World of Stories” global health panel discussion

"Many thanks for your consultation on several episodes of our series, Bones. Your expertise and assistance helped us to have a successful first season and launch us into a second. I hope that if the need arises, we may call on you again."
—Researcher, "Bones," FOX

"Thanks so much for all your help with my hantavirus-related script for Crossing Jordan. I take full responsibility for any remaining inaccuracies! And I feel so lucky to know about your individual organization—what a great resource for writers!  Thanks again."
—Supervising Producer, "Crossing Jordan," CBS

"Great stuff! The writer loved it. He is interested in more info on the special computer program. It's something new we could show. Thanks again, it really helps."
—Researcher, "CSI: Miami," CBS

"The timing of the women's health experts coming into our office couldn't have been better. Everyone was raving about it and it was sad that it lasted only an hour."
—Director of Medical Research, "Grey's Anatomy," ABC

"If I haven't said so, you guys are great, and I really appreciate the effort you put into this research. House is a tough show to write, and without lots of input from doctors we'd be lost."
—Co-Executive Producer, "House," FOX

"I don’t know what I did before I realized how incredibly helpful you guys are!"
—Supervising Producer, "House," FOX

"You have been a tremendous help. I really appreciate it. I’m sure the reading materials will be very helpful!"
—Producer, "Law & Order," NBC

"Research shows that viewers get health information through our storylines and that's an awesome responsibility. Millions of people are watching our shows each week, so we have an obligation to be accurate with the health information we include. We're teaching people about health issues and we need to be accountable."
—Co-Executive Producer, "Law & Order: SVU," NBC

"Once again, you are the best. This is just a small thank you for the impossible answers to all of our research questions. We really appreciate your help. You have no idea how much easier you make our jobs. You are a TREMENDOUS help and we sincerely appreciate it!"
—Writers’ Assistants, "Malcolm in the Middle," FOX

"Thanks so much for your help. Hollywood, Health & Society is a wonderful organization and I look forward to working with you all again."
—Consulting Producer, "Numb3rs," CBS

"It’s great to know this resource exists.  We do medical issues and storylines all the time. I'm always amazed by how efficient this process is! As always, thank you very much for your help."
—Associate Head Writer, "The Bold and The Beautiful," CBS

"Thanks again for your help. You really have proven to be an invaluable resource."
—Script Continuity, "General Hospital," ABC

"Thanks to your help … we were able to portray Cassie's injuries in a very realistic way, giving us exactly the kind of story build we hoped for. We were able to avoid the potential trap of telling a story that could not be supported medically."
—Head Writer, "The Young and The Restless," CBS

"Thanks so much for keeping me in the loop. It feels like having a sister office or team supporting us every step of the way."
—Director of Community Connections, Telemundo

What Health Experts Are Saying

“We are so very thankful for your support. The Grey's Anatomy show and ... PSA were terrific—on message, helpful to those who know first-hand the experience of schizophrenia. I/we appreciate you.”
—Katrina Gay, national director, strategic partnerships, National Alliance on Mental Illness

“As our society ages, we must recognize that older adults are not a homogenous population. While their needs, values, and preferences vary tremendously, most older adults have the same goal—to live the life they choose in the place they call home. It is critical that entertainment programming reflect this underappreciated diversity. Powerful events like ‘Telling Life Stories’ help bridge the knowledge gap and truly inspire those working in the business to think accurately and creatively about the life and experience of all older adults.”
—Dr. Bruce Chernoff, president and CEO, The SCAN Foundation

“It was such a pleasure participating in the ‘Telling Life Stories’ panel event. Thank you for initiating this essential conversation around TV’s portrayals of older adults, aging, and issues related to healthcare. We had a blast and found the level of interest and engagement of the writers very encouraging. As one of our ‘storytellers’ reminded us, the television writers’ words don’t just go into a black box, they actually go out into the world where they connect with people and can change lives.”
—Dr. Scott Kaiser, Chief Innovation Officer, MPTF (Motion Picture & Television Fund)

“It was a pleasure to work with HH&S and the writers of Chicago Med. I was impressed by their dedication to getting the details correct. Given the influence that entertainment media has on viewers, I was so pleased that the episode accurately portrayed the potential consequences of vaccine refusal. Thank you!”
—Dr. Elizabeth Briere, Medical Epidemiologist, Meningitis and Vaccine Preventable Diseases Branch, Division of Bacterial Diseases, Centers for Disease Control and Prevention

“HH&S makes the process of helping writers and producers simple, straight-forward, and minimally burdensome.  The writers and producers are always very clear about what they need.  HH&S schedules the calls with enough time beforehand for me to consider how best to meet the writers’ needs and to identify the public health priorities that might be most useful and compelling to their audiences.  It’s professionally very satisfying to see important information communicated correctly to millions of people in a way viewers can relate to and are likely to remember and act on.”
—Dr. John Brooks, Centers for Disease Control and Prevention

"I would like to thank you for including us in this important opportunity to educate, inform and make smile the writers of Desperate Housewives. In both large and small ways, I think the messages that you and our experts gave will have a lasting impact. Thank you!"
—Acting Director, Los Angeles Office of Women’s Health

"I am very excited to learn that information and examples I provided to TV writers last fall have been incorporated into a storyline episode... I know how effective such programs can be in projecting potentially life-saving public health messages. The "Patient Navigation Act" was signed into law and one of the preliminary discussions in a Congressional subcommittee included the ER storyline—another example of the power of the media."
—Senior Advisor on Health Disparities to the Director of the National Cancer Institute

"Thanks so much for brokering this discussion on Global AIDS. We appreciate your involvement and hooking us up with ER. We’re happy to help this show and others to ensure storylines are accurate and reflective of reality on the ground. Thanks again."
—Associate Director for Policy and Planning, Global AIDS Program National Center for HIV, STD and TB Prevention, Centers for Disease Control and Prevention

"The call about child sexual abuse was fabulous. What I loved most was that she asked about the messages that are not out in the media that we would want to see... So we told her about the fact that the media says there is no cure, no hope for sexual offenders—in contrast to lots of stories we hear; that treatment programs can work for many offenders, especially if you are talking about a 12-year-old acting out on a younger child. So it was just a great conversation." —Director of Educational Initiatives at NEAR!

"It was my pleasure to help. The integrity of House is quite good. It is so true that people glean information from TV and it is our duty to help with the accuracy of what is portrayed. I would be certainly available to help again."
—Clinical Director, Pediatric Hematology/Oncology, Mattel Children's Hospital, UCLA

"It’s a lot of fun for me to think about medicine in a different way than I usually do; in this case for a storyline. It’s also impressive to me how much research these top shows do on subjects. Don’t hesitate to contact me in the future!"—Program Director, National Institute for Neurological Disorders and Stroke, NIH

"Just a quick note to let you know how impressed I've been by how well General Hospital has portrayed the needle stick exposure storyline. I've been recording the show and watching the relevant parts nightly and they've done a nice job getting the data and the messages right! Nice work!!"
—Medical Epidemiologist, HIV Epidemiology Branch, Division of HIV/AIDS Prevention, Centers for Disease Control and Prevention

What Partner Organizations Are Saying

“Thank you for your counsel and leadership.”
—Manager of Communications, OneLegacy

"I wholeheartedly concur with your comments and observations regarding the Numb3rs show Friday evening. We should work to build on the positive message when it is presented. I applaud and encourage all who are involved in these efforts. Keep up the good work!“
—National Secretary, Transplant Recipients International Organization

"The fact that there has been an exponential growth in consultations and episodes since NCI began funding HH&S is a testament to your dedication and hard work that almost certainly has resulted in much greater awareness about many aspects of cancer among TV viewers in the U.S. Thanks!"
—Senior Science Writer, NCI Press Office, National Cancer Institute