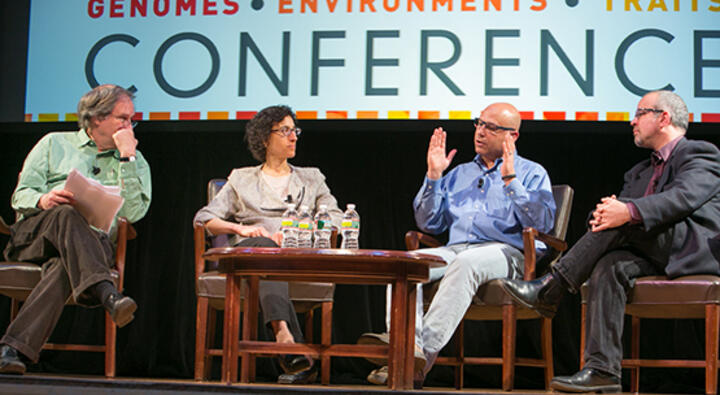 Panelists at GET conference in Boston. Photo by Mike Dravis

Amid all the talk about DNA, double helixes and genetic variations at the Genomes Environments Traits Conference in Boston was a bit of entertainment industry sizzle, as Hollywood, Health & Society Director Sandra de Castro Buffington delivered a featured presentation on inspiring writers and producers to craft storylines that improve health worldwide.

The event’s main topic was the frontiers of human biology, specifically personal genome sequencing—the mapping of an individual’s complete set of DNA—which is increasingly being seen as a promising new medical front in the treatment of disease, as well as for preventive health care. A recent article in The New York Times reported that the medical establishment is quickly moving toward the routine sequencing of every patient’s genome to be used in the fight against cancer. Sequencing an entire genome currently costs about $5,000 to $10,000, the article reported—steep but already much less expensive after years of innovative work by scientists and engineers. Researchers are counting on costs to come down even more as technology continues to advance.

The GET conference, held April 25-26 in Boston, brought together researchers, entrepreneurs, investors, educators, journalists and others to discuss the impact of personal genomics on medicine and to explore best practices in the rapidly unfolding field. It was produced by personalgenomes.org, a nonprofit organization that “aims to increase biological literacy and improve human health through its support of the Personal Genome Project and other groundbreaking initiatives.” PGP includes in its mission the goal of making personal genome sequencing more affordable and accessible.

With conferences like GET hoping to draw attention to emerging genome technology, Buffington’s presentation, titled “Genetics in Hollywood: Inspiring Writers and Producers to Create Storylines That Improve Health Worldwide,” highlighted an effective way to raise awareness by engaging with audiences through the power of entertainment.

Ting Wu, a professor of genetics at Harvard Medical School who was also a featured presenter at the conference, called Buffington’s talk “riveting ... [and] one of the best of the day.”

Hollywood, Health & Society, a program of the USC Annenberg School’s Norman Lear Center, provides entertainment industry professionals with accurate and timely information for health and climate change storylines, recognizing the impact that the entertainment industry has on individual knowledge and behavior. HH&S offers such resources as briefings and consultations with experts, case examples, panel discussions about timely health issues, and a quarterly newsletter. From 2009 to 2012, HH&S’ work resulted in more than 550 aired storylines across 91 shows from 35 networks.

To watch a selection of videos of the conference speakers, click here. For a documentary on the Personal Genome Project, “Genome: The Future Is Now,” click here.