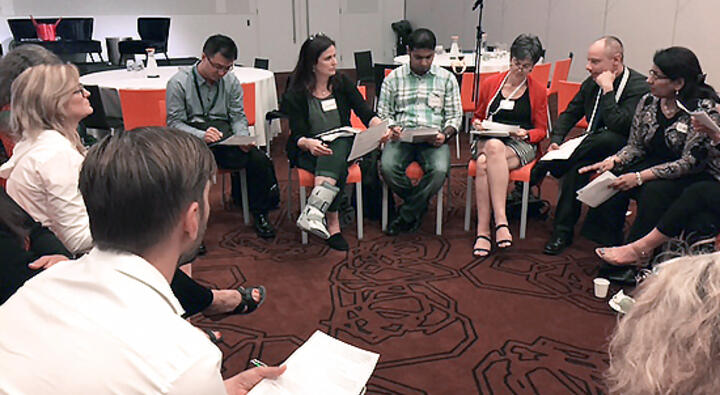 Hollywood, Health & Society brought its message of the power of entertainment to one of the most important global health battles, leading an international group of writers and producers to participate in a storytelling workshop and panel at the 2014 World Cancer Congress in Melbourne, Australia.

The workshop, “How to Use Narrative to Reach Your Audiences”—featuring Cecil, Nanda and Bradley, and led by Cecil—demonstrated the use of storytelling for effective communication with the public, policy makers and public health professionals. The entire HH&S group also participated in a panel, moderated by Dr. Saraiya, that was about cancer storylines in entertainment shows from Hollywood, Bollywood and Australia.

Before the panel started, Folb told the audience of HH&S' services in providing entertainment industry professionals with accurate and up-to-date information from experts in the fields of public health and climate change, while Parker and Dzialo each discussed the work of the CDC and HH&S' global centers in India (The Third Eye) and Nigeria (Nollywood Workshops).

Organized by the Union for International Cancer Control, the 2014 World Cancer Congress—with the theme “Joining Forces–Accelerating Progress”—drew participants from 115 countries, including prominent cancer control experts and leaders in global health.

The World Health Organization says cancer is among the leading causes of death worldwide, with a toll of 8.2 million in 2012. The number of new cases is expected to rise by about 70% over the next two decades.

Through its division of cancer prevention and control, the CDC on its website describes its role as a leader in efforts to fight cancer in the U.S., working with national cancer organizations, state health agencies and other groups to develop and promote effective strategies.