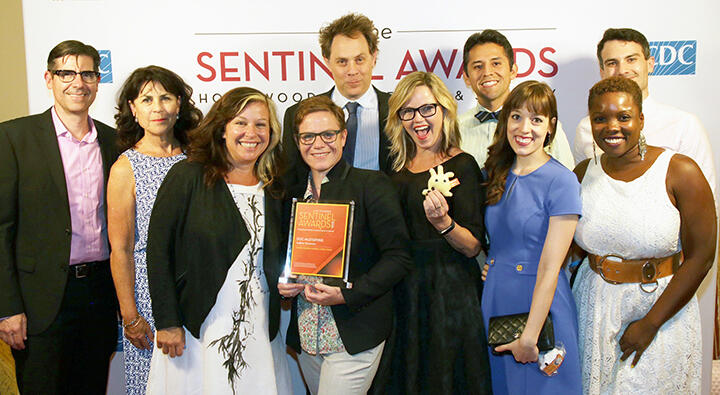 “This evening acknowledges the fact that entertainment matters,” said Marty Kaplan, the Norman Lear Professor of Entertainment, Media and Society at the USC Annenberg School for Communication and Journalism, and founding director of The Norman Lear Center. “And it matters especially in the arena of public health.”

Lear, wearing his trademark white hat, received a standing ovation as he came on stage to present awards in the Comedy category. "Five, six years ago, at 88, 89, I didn't get that kind of applause," Lear told the audience. "But now I can get a standing ovation walking across a room—and that's in my own home."

The ABC hit series black-ish won for an episode titled “Dr. Hell No,” in which the character Pops, played by Laurence Fishburne, undergoes a balloon angioplasty procedure to clear a clogged artery in his heart. The comedy series Getting On (HBO) and Jane the Virgin (The CW) placed second and third, respectively.

Madam Secretary (CBS) was the winner in the Drama category for the episode “Invasive Species,” which dealt with depression, suicide and a family’s grief—a departure from the show's mix of Washington politics and international intrigue. Code Black, the CBS series that takes place in the nation’s busiest emergency room at the fictitious Angels Memorial Hospital in Los Angeles, was second in the category for a storyline about end-of-life care.

Actress Kate Burton, a Tony winner and Emmy nominee who had a pivotal role in the Madam Secretary storyline, presented the first-place Sentinel Award to the show’s co-executive producer Moira Kirland, who also wrote the episode.

“It’s such a joy to be here tonight and to honor all the writers,” Burton said. "This is my favorite awards show."

“We did our best to handle the subject of death by suicide both realistically and with sensitivity,” Kirland said. “It was so important to all of us that we get it right [and] this award means a lot to us.”

The HBO talk show series hosted by John Oliver won for a segment about mental health.

The hugely popular Disney Junior animated show Doc McStuffins once again won for Children's Program for the episode "Selfless Snowman," about a stuffed toy named Chilly who overcomes the fear of donating his rare cottonball white fluff to help his ailing friend, Pickles. In accepting the award, creator and executive producer Chris Nee spoke about the personal experience of her wife being diagnosed a year ago with aplastic anemia, a rare condition that occurs when the body stops producing enough new blood cells.

"For several months she was transfusion-dependent," said Nee, who added that she remembered frequent days at the hospital when she silently thanked people for donating their blood and platelets, which are disk-shaped cell fragments that help the body form clots to stop bleeding. "I was able to take what was in my life and turn it into an episode that hopefully encourages blood donations."

In her remarks, Vasquez—whose East Los High character was sexually abused by her father when she was a little girl—read a poignant comment from a fan on Instagram who said that she found the courage to talk of her own abuse after watching the episode.

Also on hand and serving as presenters in the Reality category were Elena Ashmore, Sean McElwee, Rachel Osterbach, Cristina Sanz and John Tucker, who comprise most of the cast of the first-place A&E series Born This Way, which looks at the lives of young adults with Down syndrome and their families. Executive producer Jonathan Murray joined them on stage for the award.

“For too long people with disabilities, including Down syndrome, have been placed on the sidelines of life and on the margins of prime-time television,” Murray said. “With Born This Way airing on A&E, that is no longer the case.”

This was the fourth year that the Sentinel Awards ceremony was held at the Taglyan Complex in Hollywood.

Since 1999, the Sentinel Awards have honored TV shows and movies that educate and motivate viewers to make choices for healthier and safer lives. Entries from broadcast, cable and streaming network shows showcase a diverse range of topics that include substance abuse, mental health, reproductive health, climate change and many more.

The awards are sponsored by the Centers for Disease Control and Prevention and presented by HH&S, a program of the Lear Center and a one-stop shop for writers and producers in search of accurate information on public health and climate change topics.

Funded by the CDC, the Bill & Melinda Gates Foundation, The California Endowment, The Aileen Getty Foundation and The SCAN Foundation—and with past support from ClimateWorks, the Grantham Foundation and the Barr Foundation, among others—HH&S is a free resource that provides consultations and briefings with experts for entertainment industry professionals on public health and climate change topics. For more information, visit www.usc.edu/hhs.


The 2016 Sentinel Awards winners and finalists:

MOVIE
How to Let Go of the World and Love All the Things Climate Can't Change (HBO)
First place
Topic: Climate change