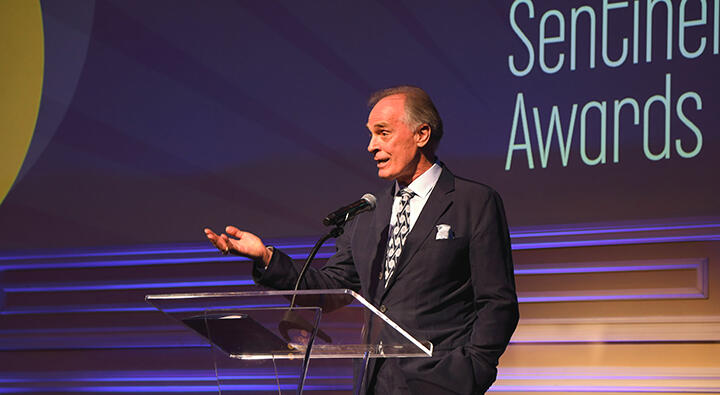 But two months later he was right as rain again—back in the Oval Office defending democracy here and throughout the world.

“When I first got involved with this show I was impressed with the accuracy of the writing, and so thrilled to be part of a show that was going to address the issues of our time, albeit from a fictitious point of view," Carradine said. "I’ve always been impressed with our writers’ uncanny ability to address certain issues in an almost prescient way, and tap into the zeitgeist and address these things in a way that become frighteningly relevant right at the moment the show is airing."

"I’m happy to say," he added quickly, "that the airing of this episode was not quite as prescient [but] the issues it addresses are just as relevant."

In addition to Carradine, the starry guest list this night included actors Justina Machado of One Day at a Time, Keller Wortham from Jane the Virgin, and Max Gail and Laura Wright of General Hospital. Also joining in the festivities were producers, writers and other members of the honored shows’ creative teams.

As the entertainment landscape expands and programs continue to push boundaries, TV storylines that inform, educate and motivate audiences to make choices for healthier and safer lives are more important than ever.

Martin Kaplan, director of the Lear Center and HH&S’ principal investigator, said: “We’re delighted to shine a spotlight on writers and producers who entertain viewers and at the same time provide them with accurate information. We hope the shows and storylines we honor will spur other writers to recognize and use responsibly the power they wield.”

Now in their 19th year, the Sentinel Awards are presented by Hollywood, Health & Society (HH&S), a program of The Norman Lear Center at the University of Southern California’s Annenberg School for Communication and Journalism. The 12 outstanding Sentinel Awards honorees for 2018 spotlight a wide range of topics that include nuclear safety, maternal health, HIV/AIDS, autism, sexual assault, mental health and disabilities. Entries were submitted from broadcast networks, cable channels and streaming services. All eligible submissions were reviewed for accuracy by experts from the CDC and partner organizations; a second round of judging looked at the entertainment value and potential benefit to the viewing audience.

• One Day at a Time—Hello, Penelope (Netflix)
Topic: Mental health

• Jane the Virgin—Chapter 78 and Chapter 80 (The CW)
Topic: Breast cancer