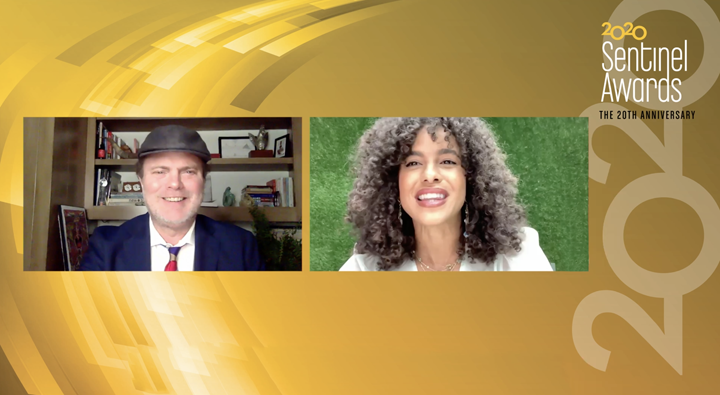 There were no red carpets, banners, media lights or tables festooned with flowers, candles and dinnerware, but the 2020 Sentinel Awards, celebrating their 20th anniversary, did have plenty of one important thing: Heart.

The virtual event, which was livestreamed on Oct. 20, recognized 13 powerful examples of television entertainment that shined a light on racism, abortion, addiction, criminal justice, sexual assault, immigration, voting rights and more. It's no wonder that The Hollywood Reporter called it an evening honoring “TV’s toughest topics.”

At a time when the pandemic has inflicted a heavy toll on the health of a divided nation—and facts and science itself are being challenged—the awards delivered some straight, heartfelt comments in pre-recorded remarks.

Parisa Fitz-Henley and Rainn Wilson served as co-hosts. Fitz-Henley co-starred in Midnight, Texas (NBC) and had a guest-starring role on Jessica Jones (Netflix). She will play the lead role as a surgeon in the upcoming ABC medical drama Triage. Wilson co-starred as the insufferable Dwight Schrute in the NBC comedy hit The Office (for which he received three consecutive Emmy nominations for supporting actor in a comedy series), and now has a show on Amazon called Utopia.

“Our country is battling a medical crisis of epic proportions,” said Horton, who directed the winning episode of NBC's New Amsterdam, “Righteous Right Hand,” about access to health care in rural Black communities.

“It’s unfathomable to think we have an even bigger crisis looming, but as I speak, millions of Americans are on the verge of losing their health coverage and any gains we made with the Affordable Care Act,” he added.

Horton presented the Sentinel Award to writer-executive producer Erika Green Swafford, who called the state of health care access in the U.S. “abysmal.” She said the episode was a "love letter" to rural Black women who, because of their status in this country, are largely overlooked.

“The current pandemic has shown that health care should be a right, not a privilege,” Swafford said.

From the Dominican Republic, Gómez, co-star of Netflix’s Orange Is the New Black, presented the award to writer-executive producer Carolina Paiz for an episode in the show’s final season, “God Bless America.” The storyline depicted families being ripped apart and children forced to represent themselves in immigration court, and Gómez said the episode comes at a time when the issue of immigration had gone from being a U.S. policy debate to a “battleground.”

Executive producer-writer Steven Canals of the FX series Pose, which is set amid the colorful gay ballroom culture of New York in the early 1980s, referred to the resilience of the LGBTQ community in talking about the terrible impact of the HIV/AIDS epidemic, which has killed more than 32 million people worldwide since it began nearly 40 years ago. Canals noted that in the current climate, Black, Latinx and other underserved populations are once again bearing the brunt of a global pandemic.

It was a point echoed by Bernhard, who presented the award. The actor-comedian plays Nurse Judy Kubrak, who runs one of the city’s first AIDS clinics, and of those terrifying real-life days in New York, Bernhard said: “The LGBTQ community came together to help, protect, nourish and care for one other—both the thousands who died and the loved ones they left behind.

“We cared for each other at a time when the world looked the other way,” Bernhard said.

An episode of Grey’s Anatomy, “Papa Don’t Preach,” depicted what can happen when a single mother tries to terminate her pregnancy alone using a risky method—in this case, taking double the amount of an herbal remedy that she searched online—before finally securing a safe, legal medication abortion at the hospital. The presenter, Kevin McKidd, who plays Dr. Owen Hunt on the ABC hit series, and Zoanne Clack, the show’s executive producer, talked about the storyline in separately recorded remarks.

The episode, McKidd said, illustrated the importance of providing a safe and legal option to a woman. “A choice, that for the time being in the U.S, is a woman’s choice and hers alone to make,” he said.

Clack said the storyline was an opportunity to show the reality that women face every day across the country. “Access to care, lack of insurance, and insurance that’s tied to jobs or spouses is such a big problem in women’s health,” she said.

The Good Fight (CBS All Access) was honored for the episode “The Gang Gets a Call from HR,” in a season that partly explored issues affecting Black people amid the 2020 U.S. presidential election.

Boatman, who plays Judge Julius Cain, said the episode put everything on the table—“voting rights, institutional racism and reparations.” The creators of the show, executive producers Robert and Michelle King, and writer Davita Scarlett were all on hand to accept the award.

“It’s an almost too-perfect moment to be [honored] for a show about racism, given the events of the last four years,” Robert King said.

In HBO’s I May Destroy You, creator and star Michaela Coel attempts to process her own sexual assault through the eyes of her character, Arabella. “It’s not mainstream storytelling,” acknowledged producer Simon Meyers. “We’re so thankful that the themes and the characters that Michaela brought to us resonated [with audiences.]”

Meyers, speaking from London, urged everyone to vote in the upcoming U.S. presidential election.

Irish actor Paul Mescal, accepting a Sentinel Award for the Hulu series Normal People for the topic of mental health, said the crisis that his character Connell experiences is very common among young adults, but was fortunate to have friends that encouraged him to seek professional counseling. “We hope this can be an example to young people and people around the world,” the actor said.

This Is Us received its Sentinel Award for a three-episode story arc on Alzheimer’s disease, with Moore making the presentation to show writers Julia Brownell, Kevin Falls and Jonny Gomez.

“Alzheimer’s is a terrifying diagnosis for patients,” said Moore, whose character Rebecca Pearson learns she’s in the early stages of the disease. “But [it] also affects family members profoundly and very differently.” In his recorded comments accepting the award on behalf of the writers, Gomez said that in a “world full of chaos, the love that binds a family together is the only constant.”

This Is Us (NBC)
Multi-episode storyline, Season 4
Topic: Aging

All Rise (CBS)
"What the Constitution Greens to Me"
Topic: Maternal health

The Good Fight (CBS All Access)
"The Gang Gets a Call from HR"
Topic: Racism

I May Destroy You (HBO)
"Someone Is Lying" / "… It Just Came Up"
Topic: Sexual assault