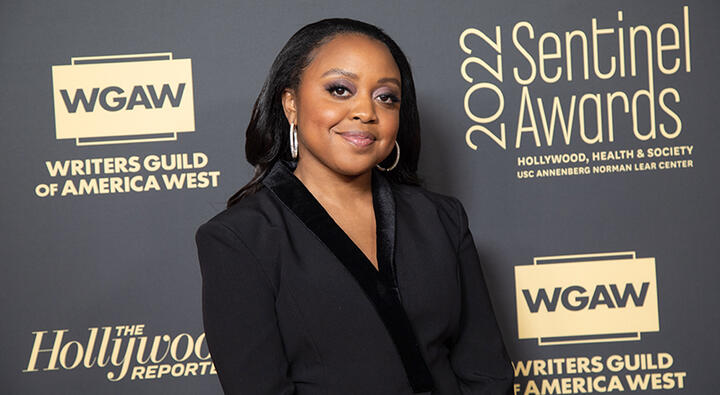 Sterlin Harjo, co-creator and executive producer of Reservation Dogs on FX, and Danny Strong, creator, writer and director of the Hulu series Dopesick, accepted Sentinel Awards for their series in taped remarks.

Yvette Nicole Brown served as host for the annual event, which celebrates outstanding TV entertainment that makes a difference. The actress and producer is known for her appearances and co-starring roles on Community, Big Shot, Mom, Curb Your Enthusiasm and A Black Lady Sketch Show, which earned her a 2021 Primetime Emmy nomination. She currently co-stars in the Disney+ movie Disenchanted, starring Amy Adams and Patrick Dempsey, a sequel to the 2007 live-action/animated musical romantic comedy Enchanted.

The annual celebration recognized 12 shows whose storytelling tackled powerful and timely topics, including Emmy nominees and winners Dopesick, Abbott Elementary and Hacks, as well as A Million Little Things, Never Have I Ever and Reservation Dogs, the breakout coming-of-age series about four indigenous teen-age friends living in rural Oklahoma.

Hollywood, Health & Society (HH&S), a program of the USC Annenberg Norman Lear Center, presented the red-carpet gala live for the first time in three years at the Wolf Theatre, located at the Saban Media Center of the Television Academy.

Season 1 of Reservation Dogs (FX on Hulu) received a special Culture of Health Award, which recognizes TV’s power to affect audiences with stories that address important issues of health, well-being and equity in society. Co-created by Harjo and Taika Waititi (Thor: Love and Thunder), the darkly funny series features an all-Native American cast and production crew, and its first season’s body of work covered topics such as healthcare and economic disparities, aging and caregiving, mental health, suicide and racism.

The other 11 scripted shows (complete list of honorees below) from network, cable and streaming services explored similar tough topics, which included the growing climate emergency and the continuing crisis over addiction.

“It was a pleasure to host this year’s event in person with the wonderful Yvette Nicole Brown as the evening’s host, and the TV Academy was the perfect venue," said Kate Folb, director of Hollywood, Health & Society. "We celebrated the successes of these amazing shows, their creative teams and the impact they have had on their audiences.”

During the awards ceremony, HH&S announced the five finalists of its Blue Sky Scriptwriting Contest, which invited writers to submit TV scripts that imagined a better world set between the years 2045 and 2100. In addition to being awarded fellowships of $7,500 each, the finalists will receive mentorships and expert consultations for revisions on their scripts. One grand prize of $20,000 will be awarded in early 2023. The contest was in partnership with the Future of Life Institute and the Writers Guild of America East.

For more than 20 years, the Sentinel Awards have celebrated outstanding achievements in TV storytelling that informs, educates and motivates viewers to make choices for healthier and safer lives. For audiences here and around the world, excellence in television provides both entertainment and fact-based information about a wide range of health topics and social issues.

Over 150 entries were submitted for the awards. All eligible submissions were reviewed for accuracy of information; a second round of judging looked at the entertainment value and potential benefit to the viewing audience.

Fraggle Rock: Back to the Rock (Apple TV)
Flight of the Flutterflies
Topic: Children’s programming

Never Have I Ever (Netflix)
… Stalked My Own Mother
Topic: Mental health