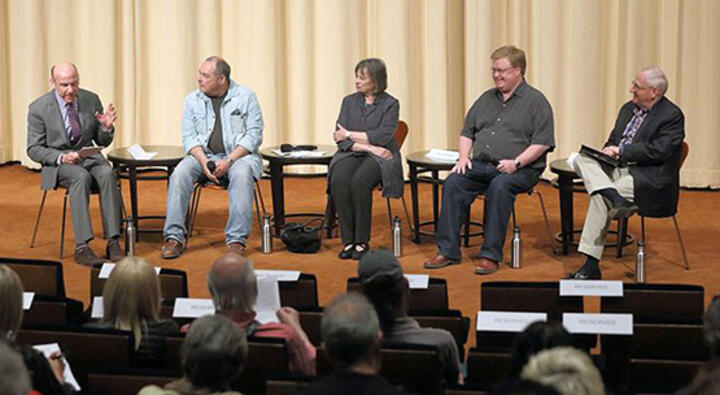 With this week’s release of the National Climate Assessment, a major scientific study on how the U.S. is already feeling the widespread effects of climate disruption, Hollywood, Health & Society’s invitation-only screening of Extreme Realities couldn’t have come at a better time.

President Obama has placed climate change at the top of his agenda, and a Pentagon spokesman in a recent NBC news article said that global warming’s connection with national security “is a mission reality, not a political debate.” Even Pope Francis is reportedly planning to make the topic a priority for the Catholic Church.

The documentary, a new installment of the acclaimed PBS series Journey to Planet Earth, was followed by a panel conversation with the filmmakers, Marilyn and Hal Weiner, who were joined by NASA-JPL climate scientist Mike Gunson and Brig. Gen. Chris King (R), the chief academic officer for the U.S. Army Command and General Staff College and a member of the Global Military Advisory Council on Climate Change. Marty Kaplan, the director of USC Annenberg Norman Lear Center, served as moderator.

Narrated by Matt Damon, the movie invites the audience to view the climate crisis through a different lens: how extreme weather events brought on by climate change poses a major threat to global security by fueling sometimes violent clashes over food shortages, mass migrations due to sea level rise and the growing scarcity of clean water. In some of the planet’s more fragile regions, where great populations of people barely get by on tenuous resources, climate change events act as a tipping point. But these scenarios may not just be confined to some “far-off” countries. As the alarming national study points out, the effects of extreme weather are hitting close to home right now—from heat waves to drought-stunted crops to devastating storms.

Like Hal Weiner said: Welcome to the “new normal.”

The Weiners, veteran political activists and environmentalists who have produced more than 225 documentaries and won an Emmy for The Earth Summit Pledge, the film commissioned to open the climate summit in Rio de Janeiro in 1992, appeared well-suited to arousing public support for the ecology. Hal Weiner, comfortably rumpled-looking in jeans, a dark T-shirt and a denim work shirt, is the more pessimistic yin to Marilyn Weiner’s optimistic yang.

Indicating the time gap between the Rio meeting and the upcoming U.N. climate summit in New York in September 2014, Kaplan then posed two key questions during the conversation: Has anything changed? And what about solutions?

How would climate change affect the U.S. military? As the experts at logistics, King noted, they’re usually the first-responders to calamities because they have the capability to move great amounts of food, supplies and other material. When these “small fires” erupt into bigger, simultaneous conflagrations, the military’s ability to respond could be stretched thin. Hal Weiner said that the big buzz phrase in the Pentagon today concerning climate change is threat multiplier.

“There are victories,” said Hal Weiner, citing Apple’s recent green manifesto to only use renewable sources of energy. He said any changes regarding the environment would have to come from concerted grass-roots efforts to get the message out in different ways, echoing the movements that helped put an end to the Vietnam War and pushed for civil rights, women’s equality and gay rights. Weiner said that he agreed more with The New York Times columnist Tom Friedman, who when interviewed on-camera in Extreme Realities said that he put more faith in innovators over regulators when it came to addressing climate change.

“Get rid of [them],” he said. “The polarizing of climate into red and blue and left and right is a tragedy. In 20 or 30 years, our kids and grandkids are going to say, ‘What the hell were you thinking?’ “

Gunson, the project scientist for the JPL’s Orbiting Carbon Observatory, said that it’s no longer new science to say that the planet is in the midst of global warming, citing the “remarkable changes” that have already occurred in the Earth’s eco-systems, especially in the polar regions.

“In the past 10 years, we’ve gone from an academic understanding to a very demonstrable impact of the fact that we’re engineering the planet [through CO2 emissions],” Gunson said. “What’s needed is the message of the film; it’s really about adaptation and what technology we can bring to bear to respond.”

It was up to King—Kaplan said he was “as perfect casting as we could want tonight”—a 32-year veteran of the Army with an environmental engineering background who has helped shepherd humanitarian missions around the world, to provide one of the key narratives. The author of Understanding International Environmental Security: A Strategic Military Perspective, King’s interest in the connection between national security interests and environmental protection grew from his time teaching at West Point. There he studied the writing of, among others, Thomas Homer-Dixon, an early proponent of the idea that the defense of national security doesn’t just entail fighting forces and weaponry, and that environmental upheaval (climate change, loss of agricultural land, forest degradation, water pollution) could drive violent conflicts.

“The best analogy I can draw from my security perspective is: we’re in a hundred years war because of the damage that we’ve already done and the amount of time it takes to correct,” King said.

How would climate change affect the U.S. military? As the experts at logistics, the general noted, they’re usually the first-responders to calamities because they have the capability to move great amounts of food, supplies and other material. When these “small fires” erupt into bigger, simultaneous conflagrations, the military’s ability to respond could be stretched thin—a concept underscored by Hal Weiner when he said that the big buzz phrase in the Pentagon today concerning climate change is threat multiplier.

And despite the military’s prowess to blow stuff up first and ask questions later, Marilyn Weiner said she was surprised to learn during research for Extreme Realities that the armed services “has been so far ahead in their thinking in terms of [preparing us] to be a climate-ready nation” by being early adopters of green technologies.

“Their working for the benefit of all of us changed my whole view of the importance of the military,” she said.