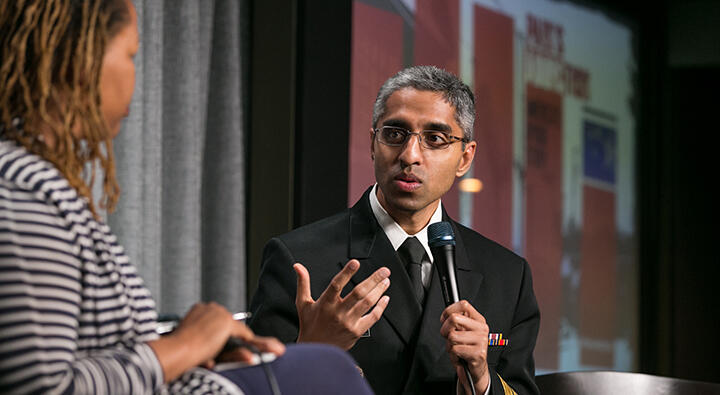 Calling the opioid epidemic “a real struggle for our country that’s getting worse,” U.S. Surgeon General Dr. Vivek Murthy urged a different approach in fighting the crisis during a panel presented by Hollywood, Health & Society, telling a standing-room audience and viewers watching on Facebook Live that those struggling with addiction have a chronic illness and need treatment, along with counseling, compassion and support.

“Addiction is not someone’s fault,” Murthy said. “It’s a disease that hijacks the brain.”

Watch video | More photos | The firing of a surgeon general

While in medical school, Murthy saw people coming into the hospital who were struggling with opioid use disorders. And what was striking at the time, he said, was the language used to describe them, even by some of the doctors and nurses—words like junkie and other derogatory terms. As a young medical student, Murthy said, he naturally took his cues from those around him, and thought perhaps that these patients were at fault for their condition. But he later realized that addiction was a disease of the brain—"rewiring" the areas that control our judgement, impulses and cravings—and not a moral failing.

When he left the hospital he worked at in Boston for Washington, D.C., to serve as the surgeon general, the nurses there who helped train him had just one request: please do something about the addiction crisis.

As Murthy traveled around the country on his Turn the Tide campaign, listening to people's stories, he discovered that there were precious few communities left unravaged by the opioid epidemic. He recounted a trip that he took last year to a remote fishing village in Alaska called Napaskiak (population 425), which is reachable only by boat or air. The small building there that houses the village’s hospital has been broken into repeatedly by people looking to steal opioid medication.

"Even in the farthest corners of our country, this epidemic has made its presence felt," Murthy said.

Cortney Lovell's life fell under that shadow. Growing up in New York State, with a loving mother and stepfather in a working-class family, Lovell was an honors student who played sports. But she struggled with anxiety over peer approval and fitting in, and turned to alcohol and drugs.

"It started out as popping pills at parties, but for me it took hold," she said. The agony of opioid withdrawal pushed her toward also using heroin, and at 17 she had a steady habit. Her parents repeatedly tried to get her into rehab, but she always managed to sign herself out of the programs.

At 19 and spiraling down, Lovell told the panel audience that she climbed into her small car on a snowy February day, smoked a last cigarette and injected herself with an overdose of heroin and cocaine. She wasn't planning on ever seeing the next morning. "I had no hope that there was any other way to live. I had no faith that I could ever live without being addicted," she said.

But she survived, and a six-month period of incarceration started Lovell, now 28, married and the mother of two children, on the long road back. "Recovery is possible," she said.

So where did America's opioid story begin? Murthy said that 30 years ago, doctors were advised to be more vigorous in treating pain (statistics show that some populations, especially women and minorities, were being undertreated when it came to pain management). Between 1999 and 2013, Murthy said, there was a quadrupling of prescriptions for opioid medication without any measurable decrease in pain reported by patients. Aggressive marketing by pharmaceutical companies followed. Murthy cited another factor: the neglect of emotional well-being. Chronic stress in people, he said, is a major driver of addiction and other illnesses such as heart disease, depression and obesity.

Reversing the epidemic, Murthy said, will take several major steps that include sharpening opioid prescription practices, providing adequate support and treatment facilities and removing the stigma that surrounds addiction—the last one being something tailor-made for the entertainment industry.

“One of the ways we eradicate the stigma is to tell the stories of those struggling with addiction and people who are in recovery," Murthy said. "To show that these people are not the other, these people are us ... people we know. [Telling these stories] allows them to come out of the shadows."

The CBS hit comedy Mom, starring Allison Janney and Anna Faris, has managed to take on the improbable task, week after week, of making the topics of addiction and recovery funny while allowing for some real pain. Tragedy strikes, sometimes suddenly. A recent storyline about Jodi, a recovering meth addict whom Janney, Faris and friends take under their wing, ends with her unexpected death from an overdose, which Faris' character learns of over the phone while at a wedding. (As part of the "CBS Cares" campaign, the episode finishes with a PSA on addiction that featured Janney, Murthy and Faris, and included a number to call for help. Murthy said that it resulted in a tripling of calls to the hotline for the Substance Abuse and Mental Health Services Administration.)

Walking that fine line between laughter and tears, Baker said, comes down to "letting serious moments be serious."

She emphasized that the show is not making light of recovery, but instead finds "the humor in situations where people deal with difficulties."

Baker told the audience that Mom started out as an idea for a half-hour comedy about an actively addicted mother whose life was a mess. But the producers later decided that putting the addiction in “the rear-view mirror” and having the character trying to become a better version of herself would encourage viewers to root for her. The idea became starting the story with recovery.

“For so many people, getting into recovery is the beginning,” she said. “We set out to tell a story about redemption, and about hope, and to make people laugh. If it in any way has helped people or reduced stigma, that's wonderful.” ◼︎


Editor's note: Since this article was posted, Dr. Vivek Murthy was dismissed as U.S. surgeon general and replaced by his deputy, Rear Adm. Sylvia Trent-Adams.