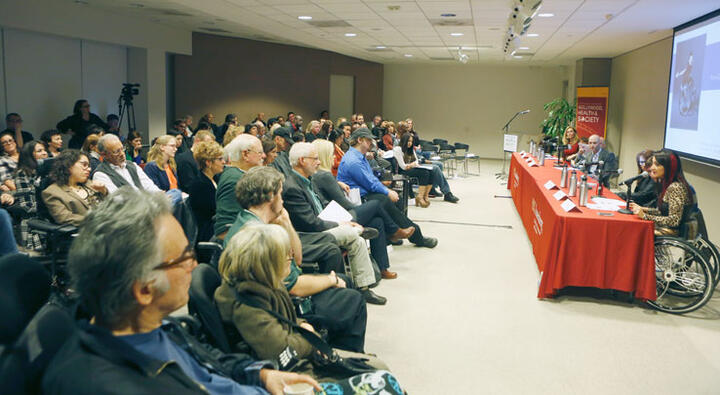 Panel discussion on the portrayals of people with disabilities in TV and film at the WGAW. Below, Ben Lewin, writer-director of The Sessions (left), with Eric Guggenheim of Parenthood.  View more photos from event on the HH&S Facebook page

Ben Lewin’s “The Sessions” is a critically celebrated movie whose main character and subject—a man with polio exploring his sexuality for the first time—makes it all the more unusual at a time when honest portrayals of people with disabilities in TV and film are rare.

Lewin, the film’s writer and director, was a featured guest speaker during a panel conversation co-sponsored by Hollywood, Health & Society and the WGAW’s Writers With Disabilities Committee. He was joined by Eric Guggenheim, writer-producer for NBC’s Parenthood; Margaret Nagle, writer of the HBO TV movie Warm Springs; David Radcliff, a member of the WGAW’s Writers With Disabilities Committee; Auti Angel, actress and co-star of the Sundance Channel’s docu-drama series Push Girls; and Ann Neville-Jan, a professor of occupational science and therapy at the University of Southern California, who gave the keynote. HH&S Director Sandra de Castro Buffington was the moderator.

“We’re so pleased to bring together this extraordinary panel of experts who have succeeded in telling sensitive and powerful stories of people with disabilities often inspired by their own unique circumstances,” Buffington said. “TV and film can counter stigma without any finger-wagging, and viewers can gain strength and see themselves succeeding against the odds.”

The panel’s purpose was to celebrate and encourage accurate portrayals of people with disabilities—at a time when there are 56 million people with disabilities in the country and “scant few of them show up on television,” according to Alan Rucker, the chair for the WGAW’s Writers With Disabilities Committee, who delivered some introductory remarks as a member of the audience.

Lewin grew up in Australia, where he studied and practiced law before moving to England to work in film and television. He contracted polio as a young boy, and he said that he was in denial about his disability for a good part of his life.

“The impulse on the part of disabled people is to be normal,” he said. “Normalcy is the goal, concealment is the process.” The director recounted the story of a friend who has polio who uses a wheelchair. When she broke her leg in 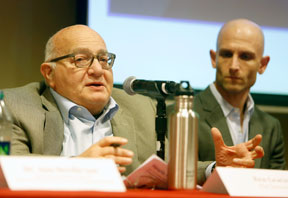 an accident and had to wear a cast, people would ask if she had a skiing accident. The idea that her condition (being in a wheelchair) was temporary and not permanent shifted public perception of his friend, casting her in a more positive light, Lewin said.

'This is your body'

For Lewin, discovering poet Mark O’Brien’s story (which The Sessions is based on) was a “kind of liberation from [all of] this.”

In the course of making the film, Lewin said that he made peace with who he was. Indeed, the message contained in The Sessions, he said, is the idea of acceptance, and perhaps the most important line in the film is delivered in an off-hand way to the character Mark (played by John Hawkes): This is your body. That line, Lewin said, “summed up the connection between me and the movie.”

But Lewin said it would be a mistake to pigeon-hole The Sessions. “I made it for a film-going audience, not the disabled community—whatever that is,” he said. Yet Lewin said he does now find himself writing characters with disabilities into his films “automatically” (his latest project has a therapist in a wheelchair), “the way you might make one character Latino and another character something else—a sense of mixed tapestry.”

Although there were some cautionary notes sounded from the panel about the quality of portrayals in TV and film of those with disabilities, the overall feeling was that progress is being made—though fitfully.

“Parenthood,” the much-praised NBC drama with its frequent storylines about Max Braverman, the young boy with Asperger’s, has clearly succeeded in bringing a character with a disability to the TV screen with one important distinction: the disability itself has become less of the story as Max finds himself on a more mainstream path, confronting the everyday things that all adolescents face—making friends, navigating his way through school, and dealing with parents and other family issues.

“I think the best [Max stories] are universal,” Guggenheim said.

Nagle, who has a brother with a disability, acknowledged that Warm Springs—a look at Franklin Delano Roosevelt’s early years with polio—was a personal “project of passion.” After initially shopping the idea for the film as a producer and getting repeatedly told by studio execs that no one wanted to see that kind of story, she wrote the script herself on spec. “That’s how I became a writer,” she said. “I wanted to out FDR as our first disabled president.”

“Franklin’s disability was such a huge part of who he was,” Nagle added. “It’s what made him the man he was. He hadn’t been much before that—when he had to sit in a [wheelchair], he couldn’t run away from things, which was the kind of man he had been before. [His wife] Eleanor said it caused him to get bigger every day.”

Nagle said Warm Springs cast a lot of actors with disabilities in smaller roles, and since then she has always put characters with disabilities of some kind in her scripts. “This person has something to tell me. It’s interesting, it’s dramatic obstacles that are unique but they’re also obstacles that are universal,” she said. “These are important stories.”

Warm Springs aired in 2005, and Nagle said she has noticed a slight shift in the way studios regard stories about disabilities. “[Execs] who are younger in the business, they’re more at ease with them,” she said. This generational quality, Nagle added, “has to do with what you’re willing to accept and the things you’re willing to lay out on the table and talk about.”

Yet for Radcliff, a graduate of the UCLA MFA screenwriting program and recipient of the Jack Nicholson Award for Excellence in Screenwriting, the pace of change couldn’t be more slow.

“I’m still struck to this day by how incremental the changes have been in terms of how disabilities are represented [in the media],” said Radcliff, who has cerebral palsy. “Even on shows that are celebrated for their depictions of disability, the disability is at the forefront of that character’s purpose.” He said many portrayals are heavy on the theme of inspiration where the disability is something that always has to be fixed.

“We’re several stages behind [other minority groups], and I think that has something to do with who’s in the writers rooms,” he said. In TV and film—and in his own personal life—Radcliff’s hope was that special treatment for those with disabilities would no longer even exist. “What we’re really after is indifference, so that it gets to the point that you don’t have to have panels like this anymore.”

Angel, whose show Push Girls (entering its second season) has been called a “genuine and ground-breaking depiction” of four women who use wheelchairs, also called for portrayals of universal themes, saying writers should focus on stories that talk about the human experience, instead of labels.

After all, she said, “we’re people first.”