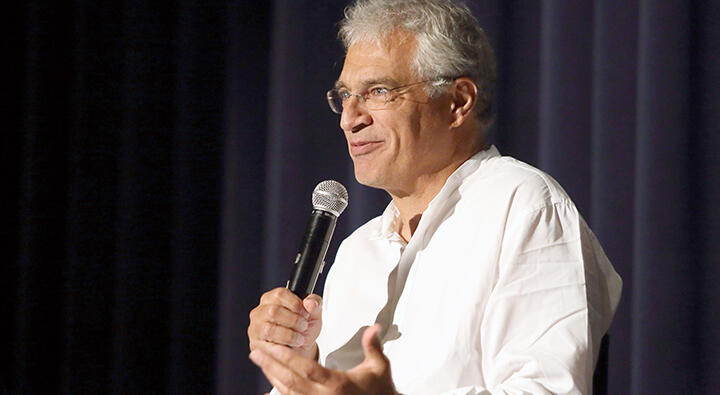 Racing Extinction director Louie Psihoyos responds to question during panel following the screening of his film at the Harmony Gold theater. Photos by Howard Pasamanick

If there’s one message to take away from Racing Extinction, the new environmental documentary from Academy Award-winning director Louie Psihoyos (The Cove), it’s this: If climate change goes unchecked, humanity won't go out with a bang but more likely with a whimper.

Like a slow-motion asteroid—the catastrophic cause of the last great mass extinction 65 million years ago known as the Cretaceous-Tertiary, which wiped out the dinosaurs—the world’s 7 billion plus population has become the driving force behind the greatest loss of species on the planet. It's estimated that half of those on Earth could vanish within a century. According to one of the most current calculations, scientists have catalogued about 1.6 million existing species.

Hollywood, Health & Society, a program of the USC Annenberg Norman Lear Center, presented an exclusive sneak preview of Racing Extinction on Aug. 24 at the Harmony Gold Theater in Los Angeles, which was followed by a brief panel and Q&A that featured Psihoyos, a world renowned photographer who has shot for National Geographic, Time, Discover, The New York Times and Smithsonian, and whose work has been shown on the National Geographic and Discovery channels; Dr. Margaret Leinen, director of the Scripps Institution of Oceanography; Gina Papabeis, a co-producer of Racing Extinction; and Ted Richane, the director of social media impact for the film. Lyn Davis Lear, an environmental activist and filmmaker, served as the moderator.

The film, which takes an often frightening look at the destruction of creatures great and small, features Psihoyos’ team of activists, artists, photographers and videographers using undercover methods as they travel the world to “expose illegal international trading of wildlife and marine life . . . and reveal the disastrous impacts of climate change on our atmosphere” and especially on our oceans.

Indeed, Psihoyos’ work is rooted in the Oceanic Preservation Society (OPS), a non-profit organization that he founded in 2005. Headquartered in Boulder, Colo., OPS’ mission—as its website states—is simple: Inspire people to save the oceans.

Consider: Take two breaths. That second one, as one of the scientists in the movie states, comes from the oceans' phytoplankton, which produces 50% of the oxygen that we breathe.

Woven into the film’s sobering narrative are poetic moments of sheer, captivating beauty, like the scene where Psihoyos’ divers perform a slow ballet with a majestic blue whale.

Now consider that we may have lost 40% of plankton production in the last 50 years, mostly due to climate change. The oceans, steadily absorbing the carbon dioxide that’s part of greenhouse gas emissions largely from the burning of fossil fuels, are rapidly becoming warmer and more acidic, which poses a great threat to marine organisms.

Our evolutionary ties to the ocean are profound. It is part of our primordial past. “It’s not for nothing that our blood is salty,” Leinen said during the panel. “We come from the ocean.”

Then, referring to the impact we’ve had on the Earth’s biodiversity, she said: “We’re extinguishing species before we even know they exist."

But woven into the film’s sobering narrative are poetic scenes of sheer, captivating beauty, like the one where Psihoyos’ divers perform a slow ballet with a majestic blue whale. Or the moment when Chris Clark, a bioacoustic scientist at a Cornell University laboratory, plays a modified audio recording of the mournful sigh of a whale, unheard by us in the real world because the giant mammals use a frequency beyond our hearing capabilities. Along with the elephant, the whale alone among all our planet’s creatures is probably the most prominent symbol of humankind’s rapaciousness because their numbers were hunted to near extinction. Now it turns out that a major risk to the survival of these magnificent animals—which have the ability to hear each other across the span of oceans—is the increased traffic from the shipping lanes that mark a global economy.

The human epoch is a mere blip when it comes to life on Earth. Psihoyos said that if you imagined the billions of years of our world’s existence to date as a 24-hour period, humans would come in a few seconds before midnight. Yet despite being "the new kid on the block," the impact of humans on the planet is being felt like no other species. As another filmmaker, Louie Schwartzberg, plaintively asks at one point: “Why would you want to disrupt something that took billions of years to evolve?”

All of the five mass extinctions that have taken place on Earth share one common characteristic—a massive atmospheric increase in carbon dioxide. But nothing compares with the spike in the amount of that greenhouse gas occurring right now with climate change. “We are burning through fossil fuels that took billions of years to lay down,” author Elizabeth Kolbert (The Sixth Extinction) says in the film. “It’s reversing geological history.”

Despite its dark side, the film is not short of inspiration, as the number of scientists, conservationists, activists and others interviewed on camera issue an urgent call to action. Those also appearing in Racing Extinction include Tesla’s Elon Musk, race car driver Leilani Münter and primatologist Dr. Jane Goodall.

“We always think that there’s somebody else who’s going to be around to save these animals,” Psihoyos said. Instead, the director says, it’s up to us. What happens to this planet is now in our hands.

“In 200 years those people will look back at this particular period and ask how we allowed all those amazing creatures to vanish,” Goodall said.

“People must be educated to become better stewards [of the planet]," she said. "If we lose all hope, then people fall into apathy. There’s still a lot left worth fighting for.”

Racing Extinction was theatrically released on Sept. 18 and televised internationally on Dec. 2, 2015, on Discovery channels in 240 countries during the UN climate change summit in Paris. In the U.S., it drew 11.5 million viewers.