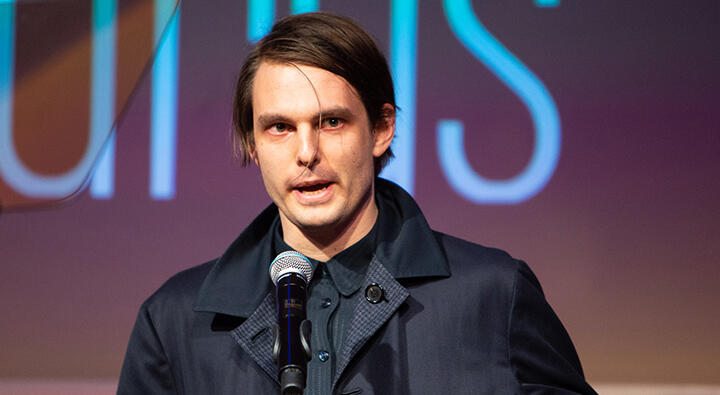 Hollywood entertainment figures including Ava DuVernay (When They See Us), Sam Levinson (Euphoria), Craig Mazin (Chernobyl), Gloria Calderón Kellett (One Day at a Time) and Amy Holden Jones (The Resident), and members of their creative teams, accepted awards for accurate and compelling stories that inform, educate and motivate audiences to make choices for healthier and safer lives.

"Through your work, you explain why stories matter," said Marty Kaplan, the founding director of the The Norman Lear Center, in his opening remarks to the audience. The awards are presented by Hollywood, Health & Society (HH&S), a program of the Lear Center at the University of Southern California’s Annenberg School for Communication and Journalism.

TV producer Norman Lear, who was a special guest presenter, said the Sentinel Awards were honoring shows that "have something on their mind."

The idea for When They See Us began with a tweet sent to her from Raymond Santana, originally one of the young boys known as the Central Park 5 (referred to as the Exonerated 5 at the awards) who were wrongfully accused and convicted of the 1989 rape and assault of a woman jogger. Santana, who was 14 when he was arrested, served five years in a juvenile detention center in New York. (Besides Santana, Yusef Salaam, Kevin Richardson, Antron McCray and Korey Wise all served terms in prison and youth correctional facilities before finally being exonerated.) In 2015, he tweeted DuVernay after watching Selma, her 2014 biopic about Martin Luther King Jr., suggesting that her next project be about #thecentralparkfive.

Lear presented an award for climate change to the CBS series Madam Secretary, and the creator/developer of such hit shows as All in the Family, Maude and The Jeffersons pointed out that “storytellers have the ability to reach vast audiences … and move millions to act.”

The episode called "The New Normal," written by Alex Maggio, centers on a freak super typhoon (oddly named "Blessing") that threatens to destroy a small Pacific island as Secretary of State Elizabeth McCord (Téa Leoni) and her team race to move its population to a new home.

Perhaps the evening’s most heartfelt moment came when Levinson, creator and executive producer of HBO’s Euphoria, opened up about his own life as he accepted the award for his show’s central portrayal of Rue, a young woman struggling with opioid addiction and recovery.

Despite his hit show’s critical success (season two is in production), Levinson confessed to the rapt audience that the urge to relapse has never been stronger for him than in the past three months.

“So the question becomes why,” he said, pausing at several times to collect himself. “Why is there a part of me that’s so hell-bent on destroying it. And I think it’s because that at the root of addiction, there’s this constant voice [telling me]: You don’t deserve this. You don’t deserve any good.

He said that he finally reached out to his wife, Ashley, and others close to him, telling them that he needed help with his recovery. “And ever since, each day’s been a little bit better. That’s kind of what it’s about. [Addiction] doesn’t go away, but as you continue to deal with it you know when it’s time to ask for help.”

Levinson left the stage to a standing ovation.

Chernobyl, a five-part HBO miniseries, looks at the "heroes and villains" involved in the worst nuclear disaster in history, which occurred in 1986 in the small "atomgrad" (atomic city) of Pripyat in northern Ukraine, then a part of the Soviet Union.

In presenting the award to writer/executive producer Craig Mazin and executive producer Carolyn Strauss, Ben Rhodes, a former national security advisor to President Obama, said Chernobyl, despite its dark storyline, offers some hope in a difficult time through its retelling of the heroic individual efforts to save lives. “Chernobyl teaches us how to be citizens,” Rhodes said.

“The goal of a story like Chernobyl is to get to a human truth,” Mazin said, “which is, unfortunately, that we don’t learn lessons as human beings unless we experience pain.

“We can imagine scenarios but we just don’t believe them,” he said. “Right now, as we sit here, there are nuclear missiles sitting in silos that we haven’t thought about in a while. And then something like Chernobyl happens, and we learn a lesson—or so we think.”

Mazin told the audience that one of the best ways to remind people of the shared collective experience of pain is through the art of storytelling.

An episode of The Resident ("If Not Now, When?") was recognized for its portrayal of systemic racism and childbirth. It was inspired by the story of Charles Johnson and his wife, Kira, who died in 2016 from internal bleeding following a routine, planned C-section at Cedars-Sinai Medical Center in Los Angeles.

Jones said that this particular story was so painful that when writers Tianna Majumdar-Langham and Chris Bessounian brought up the idea in the first season, the creative team was too scared to tackle it. Jones referred to network suggestions that the show focus more on “happy endings.”

Grey’s Anatomy, the hit ABC medical drama now in its 16th season and still pushing boundaries, was recognized for an episode written by co-executive producer Elisabeth Finch that tackled the subject of sexual assault. In presenting the award, show co-stars Kim Raver and Camilla Luddington spoke about the episode's importance.

"An incredible number of women identify as survivors and struggle to get help," Raver said, "so it’s even more important that we show they’re not alone. From reading the script to the table read to shooting the scenes on set, everyone felt a part of something powerful, brave and raw. We were women supporting women."

Said Luddington: "The outpouring and response from women and men all over the world has been so overwhelming."

A study suggested that the episode, which was followed by a PSA with voiceover by series star Ellen Pompeo, increased public awareness about sexual assault and where to reach out for help.

Among the many other highlights from the evening:

The red-carpet event was held Nov. 6 at the Taglyan center in Los Angeles. Tom Caltabiano, an Emmy award-winning writer and producer (Everybody Loves Raymond, 95 Miles to Go) served as the host.

Alexa & Katie (Netflix)
The Ghost of Cancer Past
Topic: Cancer

When They See Us (Netflix)
Part Three
Topic: Criminal justice

The Resident (FOX)
If Not Now, When?
Topic: Maternal health

One Day at a Time (Netflix)
Anxiety
Topic: Mental health

This Is Us (NBC)
Toby
Topic: Mental health