At 99, Norman Lear exemplifies what Rethink Aging is all about. An Army Air Forces gunner who flew more than 50 combat missions in World War II, he went on to become a legendary TV and film producer, as well as a philanthropist and political activist. He’s the creator and Emmy-winning producer of ground-breaking shows such as All in the Family, Maude, The Jeffersons and Good Times, which upended the rules of television entertainment by tackling controversial social topics such as racism, sexism, abortion and inequality.

Lear, who was among the first TV pioneers inducted into the Television Academy Hall of Fame in 1984, is still hitting line-drives out of the park. The reimagining of his 1975 show One Day at a Time (with co-developers Gloria Calderón Kellett and Mike Royce) featuring a Cuban-American family was a hit on Netflix for three seasons before moving to Pop TV. His Live in Front of a Studio Audience special broadcasts on ABC, co-produced with late-night host Jimmy Kimmel, turned nostalgia on its head, and brought All in the Family, Good Times and The Jeffersons to new audiences.

Recently, Lear won the Carol Burnett Award at the 2021 Golden Globes for outstanding contributions to television. “I could not be more blessed,” he said in his acceptance remarks. “I am convinced that laughter adds time to one’s life.”

His work and attitude about life demonstrate that age is only a number, and people can remain positive and productive in their lives as they grow older. We hope to encourage more depictions of older adults doing just that.

'Aging Well with Community': Sandy and Her Dad Ernie 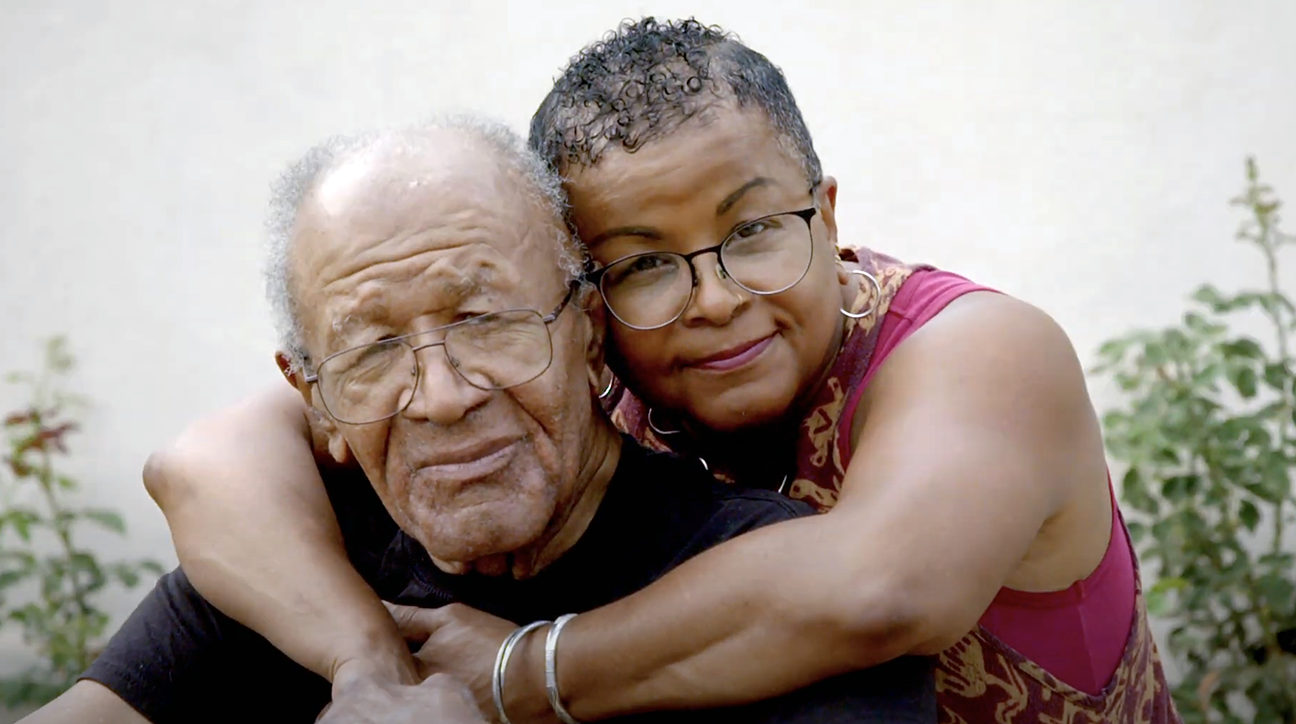 People have had a lot of time to consider what they want their life to be like after Covid-19—including what it means to age well. In the U.S., a majority of adults say they want to age at home and in community as long as possible. The SCAN Foundation series “Aging Well with Community”—produced in collaboration with Hollywood, Health & Society and 44 Blue Productions—introduces us to three caregivers and their relationships with the special older adults in their lives. Meet Sandy and her father, Ernie (video above); Grace and her mother, Seung (pictured at left); and Sarah and her grandmother, Angela. [Learn more]

With funding from The SCAN Foundation, we've worked to change cultural narratives around aging through studies of TV content. In collaboration with researchers at the University of Pittsburgh, HH&S conducted an online survey focusing on an Alzheimer’s storyline on the NBC show This Is Us. Through our TV Monitoring reports, we’ve analyzed shows for representations of aging, older adults & caregiving in prime time. Finally, read our Rethink Aging study on the way entertainment portrayals of older adults are often misleading and based on stereotypes, and watch two original videos that HH&S developed that challenge outdated attitudes and beliefs about aging. [Read more]

For three consecutive years, the Sentinel Awards have recognized TV entertainment for outstanding storylines about older adults and aging. In 2018, ABC’s General Hospital  was honored for an episode about Sonny’s dad, Mike, being diagnosed with Alzheimer’s disease. Actor Max Gail, who played Mike on the daytime drama, joined other cast members from the show at the awards event. The next year, Netflix's Grace and Frankie won an award for “The Crosswalk,” an episode about everyday challenges faced by older adults. Producer/director John Hoffman and actor Millicent Martin were on hand at the ceremony to accept. In 2020, NBC’s This Is Us was honored for a three-episode storyline on Alzheimer’s disease. While making the award presentation to the show's writers, actor Mandy Moore spoke about portraying someone who's struggling with the disease. “Alzheimer’s is a terrifying diagnosis for patients,” said Moore, whose character Rebecca Pearson learns she’s in the early stages. “But [it] also affects family members profoundly and very differently.”

Older Adults & Caregiving in the Age of Covid-19

Hollywood, Health & Society presented a virtual talk focusing on older adults and the challenges of caregiving during the pandemic. The panel, which included Dr. Bruce Chernof of The SCAN Foundation, was part of a series of discussions via Zoom on a variety of topics affected by COVID-19. [Read more]

In July 2020, we organized a panel on the fight against ageism in the entertainment industry. Guest speakers included Mike Royce, co-developer and executive producer/writer for One Day at a Time; Ashton Applewhite, an expert on ageism; and Judy Tate, a four-time Emmy Award-winning writer. [Watch panel]

Women in Their Prime Time

With the help of featured guest speakers Norman Lear and Rita Moreno, our March 2018 panel discussion “Women in Their Prime Time: Aging In (and Out of) Hollywood” examined the striking scarcity of roles for older women on TV—and older adults in general. [Read more]

Our panel “Telling Life Stories: Crisis and Care at the Beginning, Middle and End” drew a full house to the WGAW, where writers and producers from four leading network, cable and streaming TV shows—joined by experts and local storytellers— explored the issues of aging and health care. [Read more]

Jane Fonda is still working to make the world a better place. The actor, 83, was honored with the Cecil B. DeMille Award at the 2021 Golden Globes. "We are a community of storytellers," she said. "Stories have a way of changing our hearts and minds. They can help us see each other in a new light." [Watch video]

We joined with the SCAN Foundation on New Year’s Day in their campaign to honor family caregivers, who represent all backgrounds and ages. The foundation’s Rose Parade float celebrated these everyday heroes who are an important part in the lives of family and loved ones. [Read more]

The ATX Television Festival was the setting for a panel titled "Better With Age: Growing Older on TV," with actor Mimi Kennedy from CBS' Mom among the speakers. A USC Annenberg study found a lack of older characters in speaking roles on TV, but lately there’s been more than just a touch of gray. [Read more]

What is person-centered care? It's a team-based approach where a person’s values and preferences guide all aspects of their health care, supporting their realistic health and life goals. It puts older adults at the center of the decision-making process. [Read more]

We work with our partner organizations to create resources for writers and producers on a wide variety of compelling health topics, including information on aging with dignity, person-centered care and the impact that older adults will have on communities. [Read more]

A New Take on Getting Older

Baby Boomers are now well into their 60s, and older adults are better educated, live healthier and active lives, and have a longer life expectancy. So isn't it time we tossed aside outdated ideas about getting older in America? [Watch videos]